Inside Track: There’s a new flag flying at Celtic’s Parkhead 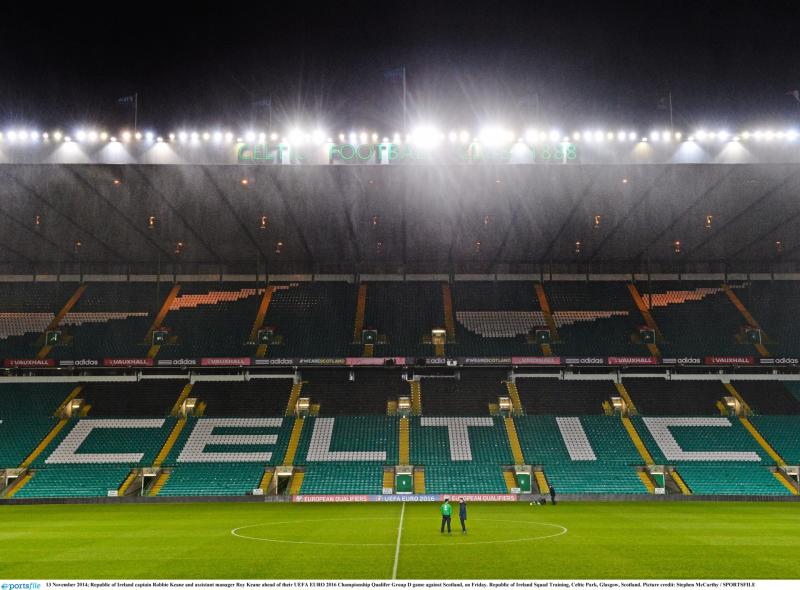 There was a time that whenever Celtic were playing at home, a fella would be seen in an Offaly GAA jersey behind the goals to the cameras’ left.

As a result, he became a bit of a personality down in the Faithful – and maybe in Glasgow as well – and decked in colours not all that different from the Tricolour’s, would have been perfectly at home among the flag-waving Bhoys.

And mention of the Bhoys: they were seeing a local derby live for the first time since December of 2019 last week, and it was earlier that same year that their team had last beaten Rangers.

The Offalyman wasn’t spotted for Celtic’s joust with the Auld Enemy. Could be he’s staying at home and instead turning his attention to his county teams, who are expected to make a bit of an impression this year.

Parkhead had the usual array of flags – maybe more than usual because of who Celtic were facing – and they were flying high for nearly all of the match. And with good reason. It wasn’t so much a beating that was inflicted on Rangers, more a drubbing.

It ended 3-0 and as a result, Celtic now lead the Premiership, having at one stage looked as if they might finish nearly as far behind their city rivals as they did last season. A whopping 25 points divided them back then.

Celtic have a new manager, a chap with the unScottish name name of Ange Postecoglou. (Rangers are in the same boat: Giovanni van Bronckhorst is their man on the sideline, the Dutchman having taken over from Steven Gerrard.)

Seemingly, Ange has good contacts in Japan, and has been quick to exploit them, bringing players with names as unpronounceable as his own over to join his squad.

One of them, carrying just Reo on his jersey – which was handy for the commentators – scored a couple of last week’s goals and is now getting the kind of adulation which Son experienced in his early days with Spurs.

And what was flown among the Tricolours? The Hinomaru, of course, the national flag of Japan, which is sometimes known as Nissoki. It’s white with a red circle and embodies the country’s sobriquet, The Land of the Rising Sun (Great man, this Google.)

Where once it was peopled by Scots, a few Irish and one or two from the continent, the Celtic team now gives more than a nod to many of those in the Premier League. But though they might have difficulty with some of the players’ names, the lads and lassies in the stands won’t mind if their team keeps coming up with wins like last week’s.

I wondered how many of them would make it into work the following morning. Maybe them all, if someone was brave enough to remind them what was coming up on this day, February 8.

22 years ago, Celtic were out against Inverness Caledonian Thistle in the Cup, and though they were going through a sticky patch at the time, trailing Rangers by ten points in the league, playing a team that had been in existence for just six years wasn’t expected to present them with too many Parkhead problems.

While details of Celtic’s shock 3-1 defeat may be forgotten, the headline in the following day’s paper is still quoted: “Super Cally Go Ballistic, Celtic Are Atrocious.”

John Barnes, just eight months in charge, was on his way out of Parkhead shortly afterwards, and it’s not known if his assistant, Eric Black, made up with striker, Eric Viduka, after the pair had squared up to each other at half-time.

Viduka had accused a couple of his team-mates of not trying and refused to go out for the second half. He was replaced by the veteran, Ian Wright.

That headline – it wasn’t really an original, but a rewording of one that had appeared 24 years earlier. Ian Callaghan was flying at the time, practically winning games on his own at Anfield and other places. One of his performances prompted the Liverpool Echo to write: “Super Cally Is Fantastic, QPR Atrocious”.