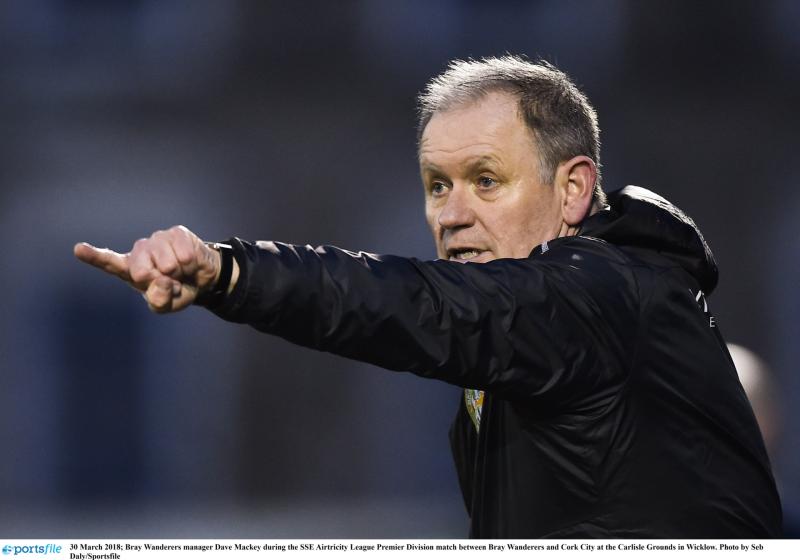 Dundalk FC first-team manager Dave Mackey has called for patience, as The Lilywhites continue their preparations for the SSE Airtricity League season with ties, Waterford, Galway United and Drogheda United in the next week.

A league winner with Dundalk as a player back in 1991, Mackey will work alongside head coach Stephen O’Donnell and his assistant, Patrick Cregg, in the Oriel dugout this year.

Signed on loan from Dundee United last week, defender Mark Connolly was Dundalk’s tenth new addition of what has been a busy winter period for the management team.

With that turnover in mind, Mackey has called for patience ahead of the forthcoming campaign but has promised an attractive brand of football will form part of the remit.

Speaking with The Democrat, he said: “The first target is for the team to be competitive on the pitch and to be playing football that has the Dundalk identity and DNA in terms of an attractive team to watch. That’s the initial goal.

“You only have to look back at Stephen’s track record over the past two years to see that. The work that was done in season one with St Pats – the benefit of that came through in season two.

“We’ll be looking to make progress as quickly as we can, but I think everyone will understand that putting a new team and squad together, even though there are a lot of familiar faces and some faces that have come back to Dundalk, it will probably still take some time to be fully up and running as such.”

Dundalk started their pre-season programme with a comfortable 3-0 win over First Division side Cobh Ramblers at the Lotamore Grounds in Cork last Tuesday night.

A second-half brace from Patrick Hoban was complemented with a goal by Dan Williams, who had only a day beforehand joined the club on loan from Swansea City.

“It was the first opportunity for the group to get minutes,” continued Mackey. “The priority was to get as many players as possible good minutes on the pitch and seeing where we are now after two weeks in pre-season.

“On top of that, to be able to bring in some of the players from the academy and the underage structure. That’s also a bonus as well because it is a big step going from the national underage leagues up to League of Ireland – particularly when you’re talking about a club like Dundalk.

“We have Mayowa (Animasahun) in training full-time with us, Ryan O’Kane and also then we had Tadgh Walsh and Jack Kavanagh, who have made very good contributions as well. It’s always good to see that and it’s important.”

With the recent Bohs game being played behind closed doors, the annual Jim Malone Cup match against Drogheda United at Oriel on February 11th (kick-off, 7.30pm) will provide the first opportunity for most supporters to have a glance at the new recruits.

Before that, however, the club have arranged two away friendlies with Waterford earlier today and Galway United on February 2nd (kick-off, 7.30pm).

“Those are games that we can work our pre-season and our training around,” Mackey added. “We’re happy with the build-up so far.

“I’ve played in the Jim Malone Cup myself before, so I know that there’s always an edge to that particular game. It’s a local derby, so it’s actually the perfect game to have prior to the first game of the season and it will be great to have all the supporters.

“The supporters were back towards the end of last year, but now, it’s a new start. I think everybody is looking forward to hopefully having Oriel Park as a fortress again.”

Meanwhile, youngster Mark Hanratty, 19, has penned a new contract at Dundalk, taking the total number of first-team players signed up for the upcoming season to 21.

However, Mackey has suggested the club’s transfer business might not yet be at an end, with Barnsley right-back Jordan Helliwell, 20, the latest player to be linked with a move.

Helliwell, whose contract at Barnsley is set to expire in the summer, is understood to be currently training with Dundalk and started in the 3-0 win over Cobh last Tuesday night.

“We’re always looking and Stephen is always looking at improving the squad,” stated Mackey. “There are perhaps a couple of areas, but overall, we’re quite satisfied. We’re satisfied with the squad that we have, but we’ll always be on the lookout.

“If the opportunity arises or if there’s a position-specific area that we think we need covered, we’ll always bear that in mind.”