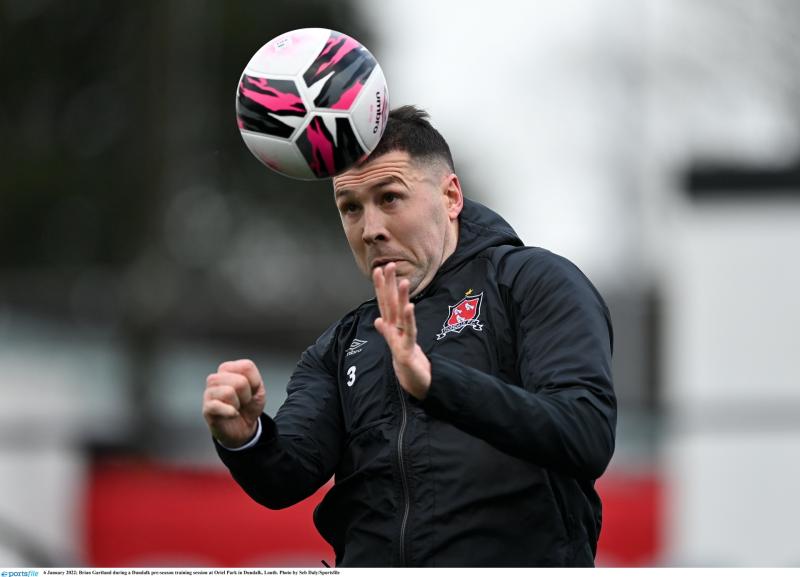 The popular defender had been out injured for almost the entire of last season following an ACL injury picked up against Shamrock Rovers. (Pic: Seb Daly/Sportsfile)

And so another year of football for Dundalk begins, the low key setting of Lotamore Park, the home of Cork non-league side Mayfield United playing host to the club’s opening pre-season friendly against Cobh Ramblers.

The tie was a great workout for Stephen O’Donnell's troops with 18 players (2 Trialists) getting a run out as the Galwegian prepares the Lilywhites for their Premier Division opener at home to Derry City next month.

Dundalk bossed the opening half, with newcomer Dan Williams impressing those in attendance on debut following a move from Swansea City on loan. The Welsh native could be a gem if producing this form come the start of the league.

It would be Dave McMillan that came closest to breaking the deadlock having hit the crossbar, however Cobh managed to weather the storm leaving it all square at 0-0 at half time in what was turning out to be a very decent workout for both sides.

The second half saw Williams finally rewarded as he struck the net for the first time with his new club and this was followed by a brace from Pat Hoban in a superb cameo off the bench, one of eight changes made at half time, as Dundalk left Cork with a deserved 3-0 win.

But it wasn’t the goals or the new signings that caught the eye of supporters in this opening friendly, but the return of club stalwart Brian Gartland after a long injury battle.

The Dubliner was last seen in action nine months ago in a league clash with Shamrock Rovers where he picked up serious a serious ACL injury that kept him on the sidelines for the rest of the year.

He was delighted to back in the trenches, making his comeback 12 minutes into the second half, and it didn’t take him long to show his qualities, making a smashing tackle seconds after being introduced.

“It was brilliant – and a long time coming,” he told dundalkfc.com afterwards. “I think I lasted 26 seconds on the pitch in Tallaght that day.

“I was like a kid after a ball and it was lovely to have that feeling again. Everyone has their journeys, and their battles and things didn’t go smoothly for me at times with my recovery but I’m still here and back on the pitch.

“I was chomping at the bit (to make a challenge). When a ball breaks and it’s fifty-fifty, it’s either play it safe or go all in and there is no point in me being back if you’re going to play it safe.

“I think that was me, in my own head, saying ‘go through the tackle, full throttle’ and play the way I’ve always played.”

The 34-year-old defender has been around the club for some time now and has seen the likes of Stephen Kenny and Vinny Perth build teams that went on to win countless trophies over the past decade.

He was full of praise for the side which O’Donnell is currently moulding at Oriel Park, believing the team will be something supporters will enjoy seeing once everything the former club captain is trying to implement can be put into fruition.

“The squad we’re putting together is exciting – and I’m excited. I wouldn’t be here if I didn’t think it was something worth fighting for and fighting to be a part of it.

“I love the gaffer’s way of playing and his philosophy and the type of character he’s recruiting. The fans will love it. They want an honest hard-working team that tries to do the right thing and we’ll try and play as well.”