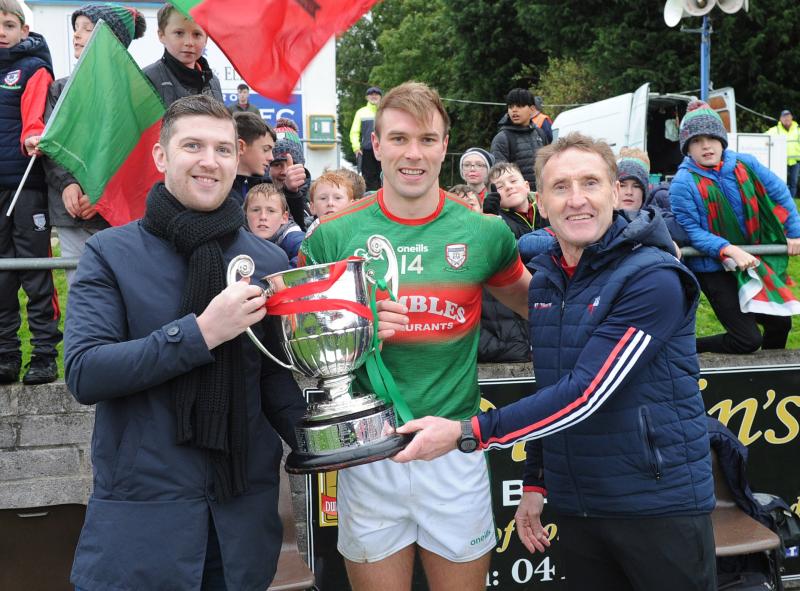 Glen Emmets are once again Louth Junior champions for the third time since 2012 after their five-point win over a valiant John Mitchels outfit. With all the attention surrounding both sides' number 14’s in advance of the Junior final, it was Kealan O’Neill that everyone in Pairc Ui Mhuirí left talking about.

O’Neill stepped out of the shadow of county man Conor Grimes to steer Emmets to Junior Championship success with a hat trick of goals. The timing of each and every goal added to their impact. O’Neill settled his side straightaway with the first score of the game, then his second, at the tail end of the first half gave his opponents a tough mountain to climb in the second half.

His third, the most decisive of all shortly after the water break, removed any doubt about the result and right as the Mitchels were building momentum. The hat-trick was completed in a backdrop of the most testing of conditions and possibly the most vital piece of play was made before any ball was kicked. The coin toss before the game.

The coin fell in the favour of Tullyallen captain Conor Grimes and crucially he decided to play with the ferociously strong wind in Dunleer. The Mitchels would have accepted that as underdogs they needed a foothold in the game to firstly settle themselves into their first final in 23 years and also to aid their game plan which relies heavily on defending a lead.

So when Grimes intercepted a mislaid pass from Aaron Kane to lay off to Kealan O’Neill for the opening major in the fourth minute, the final’s narrative shifted straightaway. Credit to Emmets, once ahead, they kept control.

Still stunned by the opener, Grimes fired over a mark and Andrew Mooney with the wind at his back swerved over the bar from a considerable distance. Experienced Mitchels full back Niall Carroll started the game on Grimes but he would soon switch sweeper roles with John Bingham.

Despite taking away from their attack in an attempt to bolster their defence, Mitchels would soon respond through two John Gallagher free kicks from the same area of the field into the wind.

Ronan Grufferty boomed one over the bar before the first half water break, but manager Ray Lambe would no doubt be happy with that start and his full back Sam Kenny’s marking job on the in-form Gallagher, especially after losing centre back Daniel Grimes in the opening quarter.

Gallagher would add another free for Gerry Gallagher and Des Halpenny’s side along with his inside sidekick Gareth Kane clipping over a mark to make it a two-point game but then up stepped O’Neill again.

Turning his marker Aaron Kane, O’Neill, like he has done all championship, thought about nothing else but finding the back of the net. The corner man drilled a low shot and it proved too slippery and powerful for David Anderson to hold on to.

Full of confidence now, Emmets sensed blood and fired over two more scores before half time to make it 2-5 to 0-4. The seven-point gap against the wind was a substantial one.

With the aid of the post O’Neill spun over the first point of the second half. With a lead to defend, experienced David Bracken playing in his seventh junior final then reverted to a deeper role and in doing so he began to soak up a lot of possession.

This victory would be Bracken's fourth junior title in a 25 year career for the Tullyallen stalwart. The Mitchels fightback came from a familiar source, John Gallagher. Gallagher landed a mammoth free before landing his sides first from play nearly forty minutes into the spectacle.

Trevor Matthews really stood up for his side in this dominant Mitchels period which cumulated in Gareth Kane dramatically cutting the gap to three points.

It would indeed be Matthews who delivered a dangerous ball into the road end of Dunleer and when Keith Boylan failed to deal with it, Kane was on hand to poke it past Conor Kelly in the Emmets goal.

Pressure was now building on Ray Lambe’s side but captain Conor Grimes showed all his match sense to come out and claim the massive resultant kick out to get his side calmly in for the second half water break. It was a telling moment.

All year, league and championship, Glen Emmets have a habit of finding the net from the restart and on Saturday when needed most, their pre-work scheme would carry the most weight when O’Neill finished the first attack of the final quarter at the second attempt.

With the air taken out of the game, Gallagher would twice add to his tally either side of Andrew Mooney’s second point. However there would be no comeback, Emmets like the opening minutes were cool, players calm and substitute Robbie Byrne collected at the back.