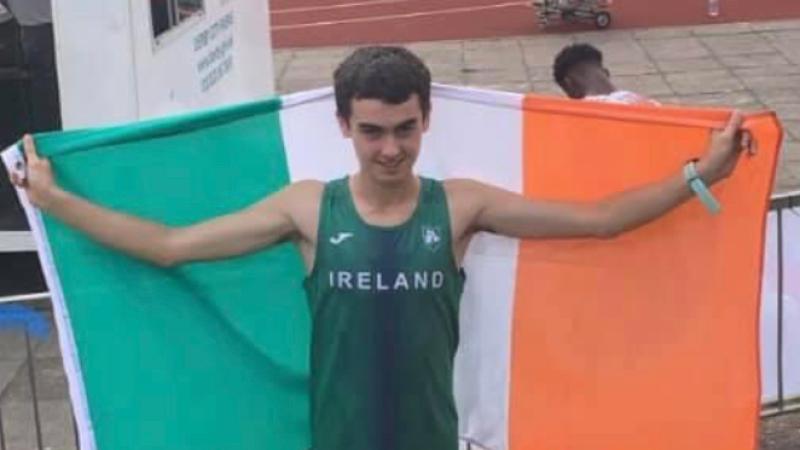 The curtain finally came down on the track & field season when Cian Gorham travelled as part of the Irish Schools team to Derbyshire in England to compete in the SIAB games.

Cian ran in the boys 800M race. The race as expected at this level was stacked with quality but that didn’t faze Cian, in fact he thrived in the company. His never say die attitude saw him sprint up the home straight moving from seventh position to finish in fifth.

The most pleasing aspect for Cian was when the results were published that he realised he had knocked a full second of his Personal Best finishing in a superb time of 1.55.2.

This was the icing on the cake in what has been the most memorable of track and field seasons, winning the National U17 title and fulfilling a lifetime dream of representing Ireland. Hopefully the first of many times he will do so.

St Peters got the cross country season underway recently when they made the long journey down the M9 to Kilmacow on the Kilkenny Waterford border.  The host club St Sennans AC put on an excellent event which produced some great races.

Niamh Brady moved up an age to compete in the girls U18 and took the lead after around 400M and from there the win was never in doubt as she seemed to pull further and further away from the rest of her competitors over the 3000M course for an emphatic victory.

Dearbhla Allen also moved up an age to compete in the girls U16 race. She led from the start and showed great courage and really took the race on, however she had to settle for second place as a St Sennans’ athlete roared on by the home crowd took the honours by the slightest of margins.

The duo were in action again last weekend when they travelled North to compete in the Armagh AC open Cross Country event.

Tomorrow the St Peters club will host the Louth Novice and Even age Juvenile Cross County Championship in the Louth GAA center of excellence in Darver with the Novice program kicking off at 10 o’clock and the juvenile program starting at 12.

'It felt like a normal night out', Positive reactions for Ireland's first pilot nightclub