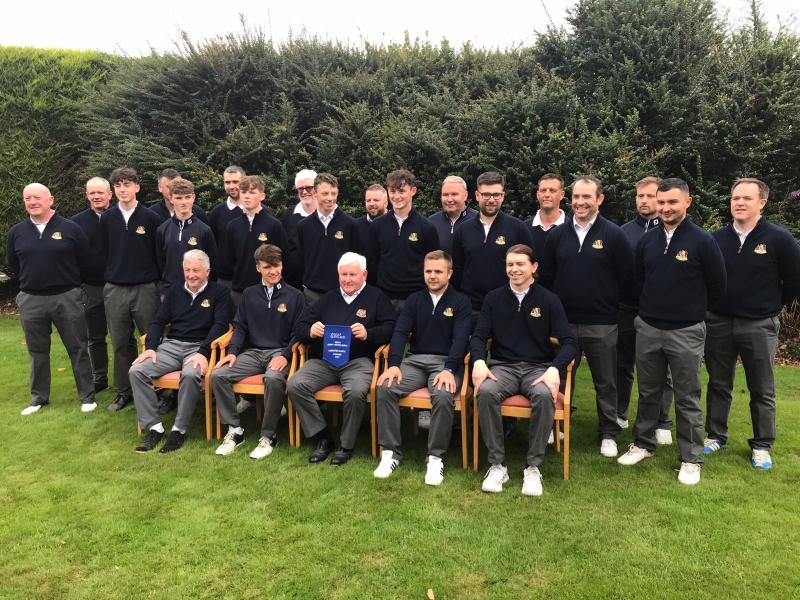 Dundalk's run in the Jimmy Bruen Shield came to an end last Tuesday when the team was beaten 3.5 to 1.5 by Strabane in the All-Ireland quarter-final at Shandon Park Golf Club in Belfast.

But they went down fighting right to the end and nearly snatched victory after staging a memorable comeback over the final few holes.

In the first two matches out on the course play was suspended for over an hour as fog enveloped the Belfast course which certainly didn’t help the nerves.

All five matches were tight over the opening seven holes but as they turned for home Strabane moved into a commanding position and at one stage were leading in the first four matches with Emmet McCabe Savage and Fergal Harte in the final match the only Dundalk pairing in front.

However, over the last few holes the Dundalk pairings responded brilliantly. In the top match Mark Cumiskey and Gerry Carroll fought back to win their match on the 17th and put the first point on the board for Dundalk.

Having been three down after 11 holes, Denis Cunningham and Ciaran Johnston fought back and forced their match to sudden death but they lost out to Eoin O’Neill and Gary O'Connell on the first tie hole.

Teenagers Chris Clarke and Eoin Purton never got their noses in front against Damian Roarty and Damian McGranaghan and eventually lost 2 and 1.

Ben Cahill and Conall Mullins Shortt had been three down with seven holes to play but they fought back to bring the match down the 18th and eventually lost by one hole.

That secured the three points Strabane needed for victory and the final match was called in with Harte and McCabe Savage leading by one hole and looking in command. It left Strabane the winners by 3.5 to 1.5.

For Dundalk it’s the end of road but they didn’t go home empty handed as Captain Trevor Giff was presented with the Leinster North pennant which the team won a few weeks ago.