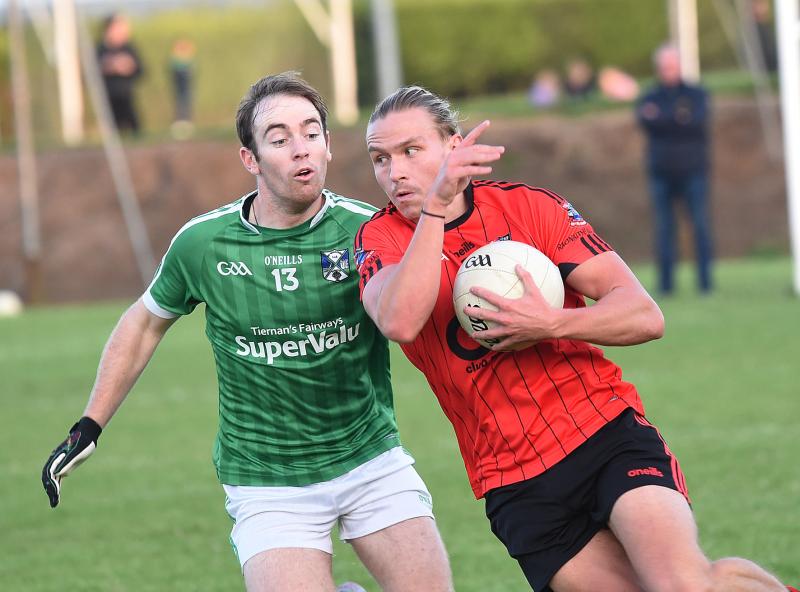 Mattock Rangers picked up their first Senior Championship group win in seven years against the same team they last beat in 2014, the O’Connell’s. The contest was a mismatch from the off as the Collon men ran out worthy 16-point winners.

The O’Connell’s have been plying their trade at the lower half of the Division Two table and their cause wasn’t helped with the absence of some of their key players before the throw-in.

Injury robbed Dean Stanfield and Bernard Osbourne, while their top scorer this season Robert Quigley and Cian Doyle transferred to Garryowen in London, while Niall Conlon and Conor McGill were also absent on the day.

With the depleted opposition in mind, Mattock set about their business nice and early with Shane Hickey seizing the opportunity with a goal in the opening play after a powerful run by Adrian Reid.

With Mattock so dominant in the early stages the Castlebellingham outfit struggled to get forward at times. On a rare attack Stephen Smith was forced into a save from O’Connell’s midfielder Ciaran O’Brien.

That foray did lead to Stuart Osbourne getting Wayne Callan’s side off the mark with a free. The point would be O'Connell's only score of the half, despite Sean Connolly’s best efforts in the full forward line alongside Sean Cairns.

Mattock did step off the gas in that second quarter, but McKenna and Fleming (free) pointed just before the half to leave the Collon men in a commanding position, 1-8 to 0-1 ahead.

Jackie Agnew stood up once again for his side as they enjoyed their best period upon the resumption. The centre back landed two frees in a typical showing of defiance.

Mattock then lifted the intensity and emptied the bench. Fresh legs with points to prove resulted in turn overs across the O’Connell’s half back line. Shane Hickey and Cathal Fleming profited with scores running directly at the already retreating Kilsaran based outfit’s defence.

Former goalkeeper Connolly got on the scoresheet with a free but Mattock then killed off the game with two devastating blows in successive plays.

With that, the game petered out but not before Conor Kiernan hammered the ball to the Collon net. The midfielder moved to full forward and he collected a high ball and turned sweetly before finishing.

Mattock responded emphatically with four points in a row to see the game out. James Caraher with the last of the Collon sides points after linesman Stephen Murphy intervened to ensure the correct call was made.

Kiernan and Agnew ended the game with the last two points as they now look to regroup for St Brides in a fortnight's time while Mattock look to face last year’s intermediate champions this Sunday.