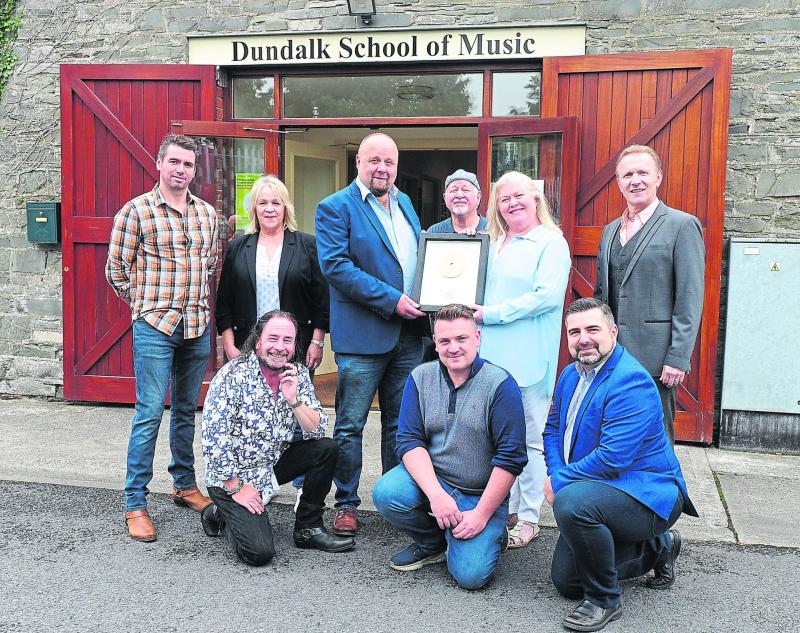 Liam Reilly's sister is presented with a copy of the song Avenue Man, which was written as a tribute to the late singer

A ceremony took place last week to honour the late Bagatelle frontman, Liam Reilly, with a golden CD of a song in tribute to him being presented to his family.

The ceremony took place in the Dundalk School of Music on Thursday, with Mr Reilly’s sister receiving a copy of the song “Avenue Man”, which was recorded in tribute to Mr Reilly, on a golden CD.

Mr Reilly, who passed away in January 2021, was the frontman for the incredibly successful Irish band Bagatelle and was a Dundalk native. The presentation saw the golden CD being presented to Paula Mullens, Liam’s younger sister.

Stephen Hand, a member of the Dundalk wedding band, The Urge, said that he and Denver Rafferty created the song as a tribute to Mr Reilly, who was a friend of theirs.

“We were friends with Liam from over the years, we used to have a pint with him most Mondays,” said Mr Hand. “Liam would have came from the Avenue [Road], that’s why the song is Avenue Man.”

According to Mr Hand, the family were “over the moon” with the tribute to Liam. “They were absolutely over the moon, overjoyed… We’ve received a lot of thanks and gratitude from the family.”

Mr Hand said that he and the band were honoured to pay tribute to Liam with a song. “We’re just delighted to be able to honour Liam’s memory with something like this,” said Mr Hand.

Speaking to the Democrat, Mr Hand said that he would love to see a proper monument to Liam in Dundalk.

“We do want to see a proper monument put up to Liam, as in a statue or something in Dundalk, but this is our offering in the way of a tribute.”

“He was one of Dundalk’s finest sons, there’s no question of it, and his legacy will live on for many, many years.”

The song itself is performed by The Urge, and features vocals from Eamonn Toal, who performed for Ireland at Eurovision in 2000.