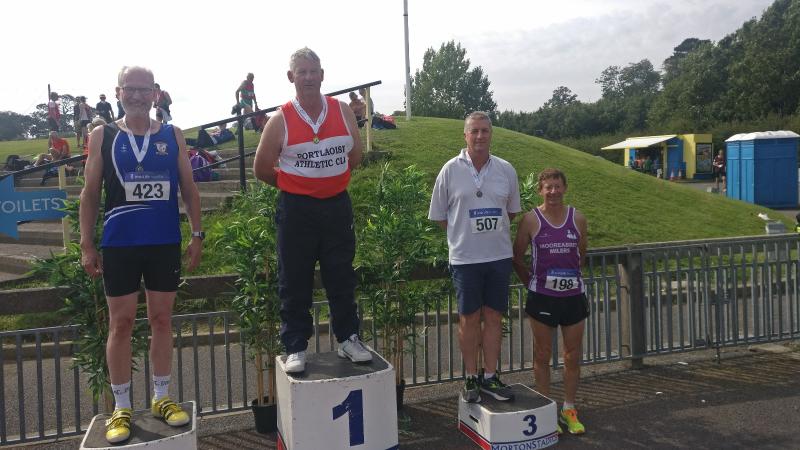 Tom McGrane, left, of St Peter's AC on the podium following his second place finish in the National Over 55 Shot Putt

It was left to the ever-willing Tom McGrane to fly the St Peters flag. Tom took part in two events and came home with silverware in both. He competes in the over 55 section and threw an impressive 9.47 which won him the silver medal in the shot putt.

That wasn’t enough for the veteran athlete, who then brushed himself down and competed in the over 55 hammer Throw where he managed to throw 18.82 to capture the National title and pocket the National Gold medal.

Meanwhile Ardee and District AC also had one sole combatant at the Games in Dublin, with their chairman Peter Carolan in action in the long Jump Competition. He was able to keep the Louth success going by bagging a bronze medal. A superb end to the season for clubs in the region.

On Saturday attentions were on the young athletes, as schools’ athletics returned with the Leinster Trials for next week’s Tailteann Games once more held at Morton Stadium.

The St Peters Club had three athletes compete. Cian Gorham in his first race since winning Gold at the national U17 Championships came through his heat comfortably and although not performing just as well in his recent races he still did enough to finish in second place to make the Leinster team.

Both Niamh Brady and Mark Litchfield also ran in the U17 800M and although neither made it through both can really look back at their track and Field season and be satisfied with the progress they have made.

Dunleer AC was another local club hoping to leave their stamp on the trials, with four of their best sent to the capital in search of earning a green singlet for next week.

Conn Bonar was competing for St. Mary's College in Dundalk and finished second in the 100m hurdles after a great display of hurdling technique. Meabh Eakin of Ballymakenny College Drogheda was also in great form and had a well-earned second place in the 3000 metres.

Erinn Leavy represented her school St.Vincent's Dundalk and after a strong run was in an almost blanket finish in the 800m, coming away with 3rd place, and finally Matthew Fitzpatrick, running for Scoil Uí Mhuirí in Dunleer was delighted to come away with a 2:09 personal best in the 800m.

All these youngsters from both clubs can be justifiably proud of their results after working hard in training for many months. This was a welcome return to schools' competition and a fitting tribute to their parents and coaches who have guided them to great success.