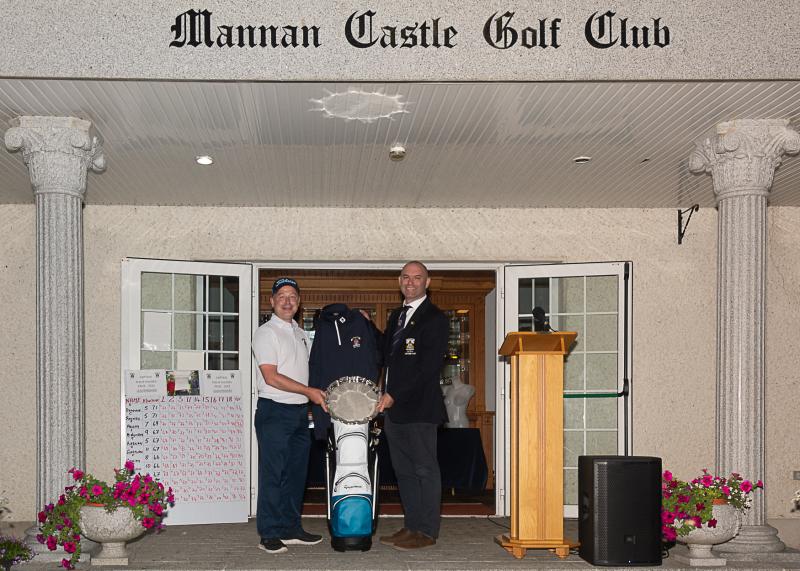 Captain Philip's Prize Weekend kicked off in earnest last Friday afternoon and the golf continued until five 8.35pm on Sunday when the final putt was sunk on the 18th green. Captain Philip was thankful for the fantastic turnout over the weekend, and he also would like to acknowledge everyone who contributed in any way to what was a fantastic weekend of golf it was.

The course, which was in tip top condition, held its own very well over the weekend with only six players managing to break the 36-point barrier.

The club would like to pay tribute to all the green keeping staff who work tirelessly and present the course in perfect shape. Weather played its part over the weekend with nearly everyone experiencing some bad weather at some point during their rounds.

The Captains Prize was played over two rounds with the top 12 scorers qualifying for Sunday evening's playoff. Normally 66 points would leave you behind the ropes on a Sunday evening on Captains Weekend but alas this year it meant you had to take your deserved place in the prestigious playoff.

The Playoff began at 6pm and only five points separated the twelve players. The final group opened the door slightly on the first hole by only adding two points between them. Lenny McKittrick, Noel Gartlan and Mark Lambe applied early pressure with some great golf over the opening playoff holes.

Conall Rooney will rue a slow start in the playoff, but he played some excellent golf over the weekend, and he will no doubt contest many times in what is sure to be a very bright golfing future.

Shane Donohue, many peoples favourite after his superb round last Saturday, put up a gallant battle but with only one pointers on both 17 and 18, that left him two back of the eventual winner.

The ever-steady Terry Kiernan put up a great battle and he was unlucky to find a bad lie in the greenside 18th bunker which cost him a couple of shots.

Fionnan Cassidy shot an excellent round of 35 points on Sunday to make the Playoff and he acquitted himself very well with a great finish with pars on both 17 and 18.

Our Senior Captain Joe Mullen shot a super round of 35 points to earn his place in the Playoff, Joe played some nice golf and but for a mistake on the par 5 14th who knows what would have happened.

Val Donoghue shot one of the rounds off the weekend in Rd 1 with an impressive 37 points, a slow start in the Playoff cost Val dearly but he will be happy with some of the great golf he played over the weekend.

Ronan Donaghy had a fantastic round in the rain on Friday evening, coming home with 38 points, this was Ronan`s first attempt in the Playoff and he did admit to some nerves early on, but he put in a solid effort and we are sure he will be back contending in the coming years.

A fan favourite Vincent Duffy played brilliant golf over the two qualifying rounds, his highlight was a great birdie two on the par 3 8th in round 1, a couple of costly holes in the middle of his Playoff round would be detrimental to his chances but he can be proud of his weekends work.

Mark Lambe is no stranger to Playoffs and he showed all his experience and class to shoot level par for the nine holes but unfortunately for Mark he came up two points short and he can take some solace in winning the gross prize for 2021.

And then there was one. Eugene Molloy opened up round one with an impressive 38 points which put him in a great position after 18 holes. In round two he knew he did not have to do anything spectacular to qualify, although he did stick his iron shot to three feet on the 12th for the easiest of birdie twos.

31 points on Sunday morning would see the ever-popular Eugene qualify in 3rd position, two points behind his playing partners Donohue and Rooney.

A slight miss fire on the tee on the first hole was just a blip as Molloy would recover to get a point and from there on, he was steady as a rock. 17 points in the 9-hole Playoff was enough for Eugene Molloy to win Captain Philip's Prize and he is a very deserving and popular winner.