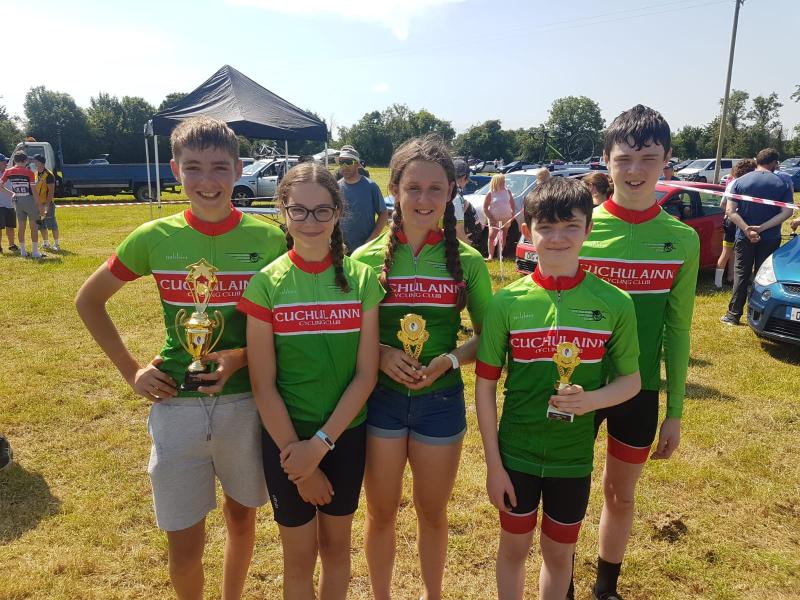 The five Cuchulainn Cycling Club members, who traveled to Bohermeen in County Meath over the weekend to compete in races

It was a big week of racing in Dundalk's Cuchulainn Cycling Club. On the underage racing front, the club had five riders travel to Bohermeen in County Meath and it was a fruitful trip for Rhiannon Dolan who won the under 14 Girls race, while also placing 8th in the under 14 boys.

In the same under 14 boys race Calum McCaffrey, competing in his first ever open race was third, another trip to the podium for the club. Like Calum, Connor Goss was also a first time racer the weekend and he collected a fifth place in the under 12 boys.

The first round of the Bike Station Summer League saw Newry's Mark McParland take the win ahead of James McEneaney of 4 County Cycling Club in second and Don Harte of Armagh Down Wheelers in third.

First clubman home was Paul McCann in sixth position. The race was four laps of the challenging Sportsmans Circuit which had a long uphill stretch. Mark was very much the strong man of the night, bridging across the gap from group three to the leaders in group two to take the win.

In the support race it was that man again Callum McCaffrey who was victorious ahead of Belfast's Eoin Homes and Barry Cassidy of Cuchulainn.

Also in action racing in the Irish Veterans league was Dale Copas, Sé Weston, David Holland, Martin Gray, Dickie Newell and Jimmy Flnn. This league has seen the club claim a lot of impressive results down through the years, however this weekend was a bit more barren on the results front, despite some very strong performances.

Second Covid-19 certificate hotline set up due to demand