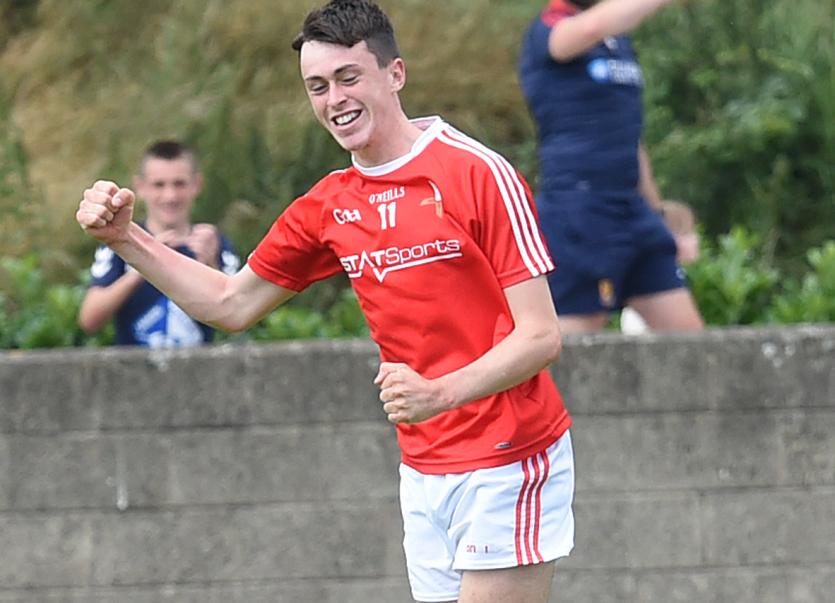 In a remarkable individual display last Saturday afternoon, Kieran McArdle scored all four of Louth’s goals in their Leinster Minor Championship quarter-final triumph over Laois. Each one of the goals were a sample of the special talent the St Brides youngster possesses.

McArdle was the obvious difference on the day, but the outcome of the game could have been quite different if Aaron Hoey’s charges didn’t show supreme composure at the start of the second half.

The act of sending Gerard Hanlon off was a huge distraction. The timing and the nature of the incident was even more off putting.

The Cooley minor made his way out onto the field for the start of the second half and when he bent over to tie his laces his marker, Laois half back Killian Byrne, chose to push and antagonise him.

Byrne clearly annoyed Hanlon so much so that Hanlon chose to shove Byrne in the chest. It didn’t help that full back Tadhg O’Brien was coming out from behind Hanlon at the exact same time and chose to push Byrne to the ground with great force.

The linesman deemed it foul play and referee Lee Moore duly sent off Hanlon. Thankfully this group of minors displayed huge resilience and did not let the numerical disadvantage become an excuse.

Instead, The Wee County in fact benefited most with the extra space left up front by the Cooley man’s departure and looked extremely motivated. Liam Flynn, who was quiet up until that point, sprang into action with a free.

When Laois wingback Colm Murphy picked up a black card after the water break, Louth showed their intent when both sides were at even numbers. McArdle picked off his third and fourth excellent goals that sealed their place in the semi-finals.

Laois wing forward David Costelloe opened the scoring on the immaculate Stabannon pitch, but the Midlanders attack lacked real bite and with their free taker Kieran O’Donnell not on form Louth were allowed to get over their nervy start.

McArdle of course, opened Louth’s account with a well struck 45 before going on a blistering solo run to fire home at the near post his first goal on what was a sweltering hot day.

O’Donnell soon cancelled that score out with a penalty, after Daire McDaid was deemed to foot block the Laois attacker Costelloe. Dara McDonnell then burst through to make it 1-3 to 1-1 at the first Sos Uisce.

Domo Akin again was making his presence felt at full forward but it looked like Louth were letting slip a commanding position as Jack Byrne and Costelloe found the range. Step forward McArdle.

With Seán Reynolds having a terrific display on his home turf, the wing back drove forward again on a mazy solo run and just when he looked to be turned over, he spotted the ghostly run of McArdle behind the Laois defence.

McArdle received the ball with plenty still to do, but he took his four steps before his bounce took it past Conor Brown in the Laois goal allowing the Louth centre forward to blast it home with the easiest of tap in’s.

That brace of goals would give Louth confidence and with Stephen Kerr Rafferty showing up very well at cornerback for Louth they went in a deserved 2-4 to 1-4 in front at half time.

Then the aforementioned half time drama enthused. Louth didn’t flinch and kept their focus. Akin drifted out to the half forward line and across the field the home side really dug in and put in a workmanlike shift. Reynolds made a memorable block in this period.

Laois put their place kicking struggles behind them when goalkeeper Conor Brown came up at the last minute to stroke over a 45’ with ease and Murphy found the range with the first of his two second half free’s to leave it 2-6 to 1-6 at the second half water break.

Murphy then picked up a black card for a silly body check under the stand and with the numerical advantage gone, McArdle linked up expertly with Liam Flynn on both occasions for his final two goals to push the game beyond doubt.

For the third goal, McArdle followed up the play, a long ball from Sean Reynolds was won in the air brilliantly by Flynn, the Mattock man did well to hold onto possession and even more so to spot McArdle with the lay-off who then cracked a shot on the underside of the crossbar into to the net.

Not happy with his hat-trick McArdle then showed an acute football brain to read a free kick inside the Laois 21-yard line. The St Brides attacker intercepted the ball in the direction of Flynn who also read the situation to bear down on goals before duly completing the one-two for McArdle to finish neatly to the net.

Flynn added another point, cutting in from the left to round off Louth’s scoring for the day while shell shocked Laois had no response to the scoring blitz bar a Murphy free kick upon his return to the field.

The Louth minors continue to represent the county jersey with pride and now march on to date with near neighbours and rivals Meath for a place in the Leinster Minor Final.

BREAKING: Over 1,000 new cases of Covid-19 reported in Ireland today