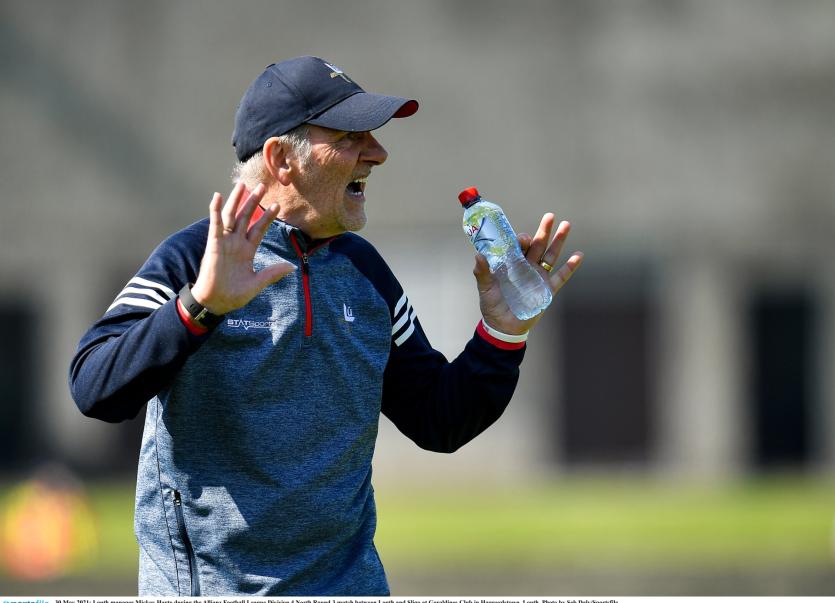 There may not have been an actual trophy on the line at the weekend, yet the fact that Louth has secured an immediate route back to Division Three football was enough to leave Mickey Harte in a jubilant mood as he greeted the media.

A Cup is fine but will be back on the mantlepiece of another county next year, however securing a spot in Division Three could be the first step in Mickey Harte’s master plan of bringing the good times back to a county starved of success.

Yet even on an occasion where they played some sublime football, the wily veteran was looking to the future, already focusing on where his troops can improve more in their next match.

“It was all about the result, it was winner takes all, so it was critical result for us because we put in real good work in the previous three games and if we hadn’t won today that would have been lost on everybody” he exclaimed.

“The fact is we clinched the deal today, getting up to Division Three is very important. We did have a good performance but you can see there is plenty of room for improvement too, we missed lots of chances as well.”

“So I’d be very happy with the general overall performance, as it’s not bad when get that sort of score line and still know there is plenty to work on.”

1-18 from play showed once more the threat that Louth now carry going forward, yet the Tyrone native took a very pragmatic approach to their success.

He is delighted that with every game, they are buying into the philosophy and style of football he is trying to implement in the county but was keen to stress that they are far from a finished article and will need to improve further to overcome the tougher challenges that lie ahead.

“They stuck to what we are trying to play, they have taken on board what we believe is a good way to play this game. It is just one day, it doesn’t mean the world ends and we’ve mastered football, it means we’ve done enough to get ourselves to the next Division”

“That is a new challenge, a new ball game, the championship coming up in a fortnight is a different ball game again, but we are really happy to be where we are right now.”

Problems in earlier encounters has seen the Wee County struggling to put a good shift in for the full 70 minutes, lulls in their game allowing all three of their opponents to register purple patches.

A poor end to the game ultimately saw Antrim prove victorious in the first round of the league, while the second day out despite dominating for prolonged periods Leitrim actually went into the break in front due to Louth’s lapse of concentration after a water break.

Last weekend they put in a fine 70 minutes of football, which Harte was happy to see but he knows that is when you are trouble that the real ability of a team shows.

“There was a wee bit of a dip at the start of the second half, we let them get a few scores back but that’s inevitable as nobody holds the court for the whole game.”

“There is a time when you are under the cosh a bit, on the backfoot and ultimately how well you do on that back foot determines how you’ll likely do in the game.”

If one thing has come out of the campaign, it is the fact Louth have shown they are far more than just a team. They are now a panel of players where every man is confident that when required, he will have the ability to step up and be counted.

Strength and depth are everything in the modern game and the Tyrone native was keen to acknowledge the work done by every player he has seen this year. Players that have been giving their all just for the right to compete for a Louth jersey.

“There is a good squad of players there, there is 35 lads with us at the minute and they are working hard. I told the players before that only 15 start, so it is a privilege and you need to honour that privilege.”

“If they weren’t there working with us giving us the ability to play in house games every night for 10 or 15 minutes then we wouldn’t be where we are. All of those boys are so important and they contribute, they don’t get to be seen here but we see them on the training pitch.”