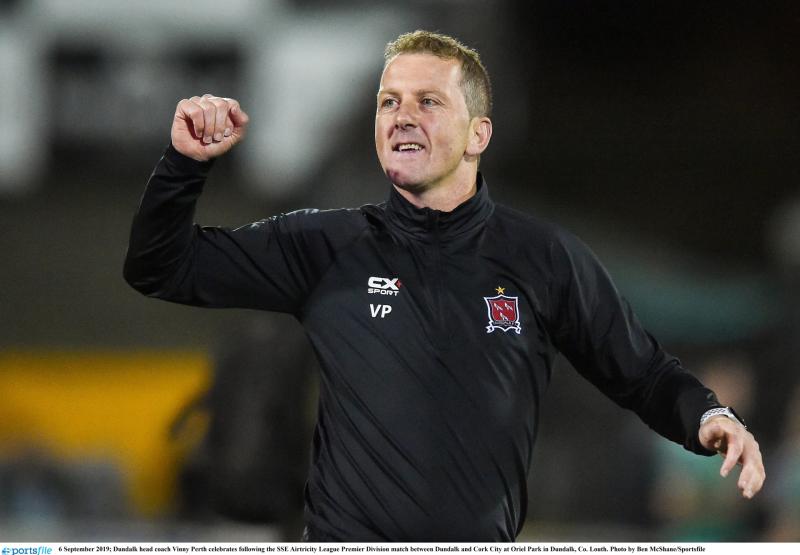 Less than 12 months after his sacking, Perth was reinstated as Dundalk’s head coach on Wednesday night, with the 44-year-old signing what’s believed to be a short-term deal.

Perth – who was Stephen Kenny’s assistant for six years – was only a penalty shoot-out away from guiding Dundalk to a domestic treble in his only full season in charge in 2019.

However, he endured a difficult start to 2020; culminating with his dismissal after the club’s 3-0 Champions League first-qualifying-round defeat to NK Celje last August.

“Sometimes in life, you’re very lucky and you get what’s called a second chance,” he told the club’s official media.

“Statistically, UEFA say 65% of managers only get one job. This is my second job in football management, albeit at the same club. I’m very lucky. There’s no doubt there a lot happened in between them 12 months.

“It took a lot of soul-searching – probably on both sides – and we’ve come up with what I really think is a really good solution. I’m really proud to be back.

“I think the club is at a stage where we could do with a shot in the arm and I just hope I can bring that to the club.”

His departure from Oriel was followed by speculation that the club’s controversial chairman, Bill Hulsizer, was interfering with first-team affairs during Perth’s reign.

This has led to much surprise that Perth – who has in the past year been interviewed for jobs in England – would want to return and work for Dundalk’s dysfunctional owners.

“I’m one of a couple of people who could have done this job,” he added.

“I can’t speak for the board, but I’m probably seen as a safe pair of hands – someone who’s had success at the club before for an eight-and-a-half-year period. I’m someone who knows how to win and has been part of the winning culture in this group.

“For that reason, the board effectively felt I was the right person to do that job. There was absolutely obstacles to get over.

“There was a certain amount of hurt on both sides, but you’ve got to park your ego in any business you ever go into at the door and if you don’t do that, you’ve no chance.

“Yes, I was hurt and I think maybe the club was hurt as well, but at the same time, really what matters is Dundalk Football Club.”

Perth’s first game back sees him come up against bottom-of-the-table Longford Town – a club he spent the best part of a decade with as player, assistant and caretaker manager.

And, despite their current standing, Perth has been impressed with his former club.

“I’ve seen Longford a lot and what we see with them is – particularly in the last couple of weeks – an excellent side. A young, hungry side battling for Daire (Doyle). They play all sorts of different systems.

“I think the local boy in Aodh Dervin sums up everything about this team. He’ll die for the cause which is great for them.

“They still hang one of my jerseys in the bar. It is just an amazing football club, amazing people and I wish them well obviously after tomorrow night. Daire’s done a tremendous job.

“We’ve got a real game on our hands tomorrow. Longford’s intensity and running power is one of the better in all teams in the league.”

In terms of team news, Dundalk are without Wilfried Zahibo, who remains in quarantine, while David McMillan is also a doubt after picking up an injury last week.

Brian Gartland and Daniel Cleary are long-term absentees for The Lilywhites, but asides from that, Perth should have a full complement to choose from for his first game back.