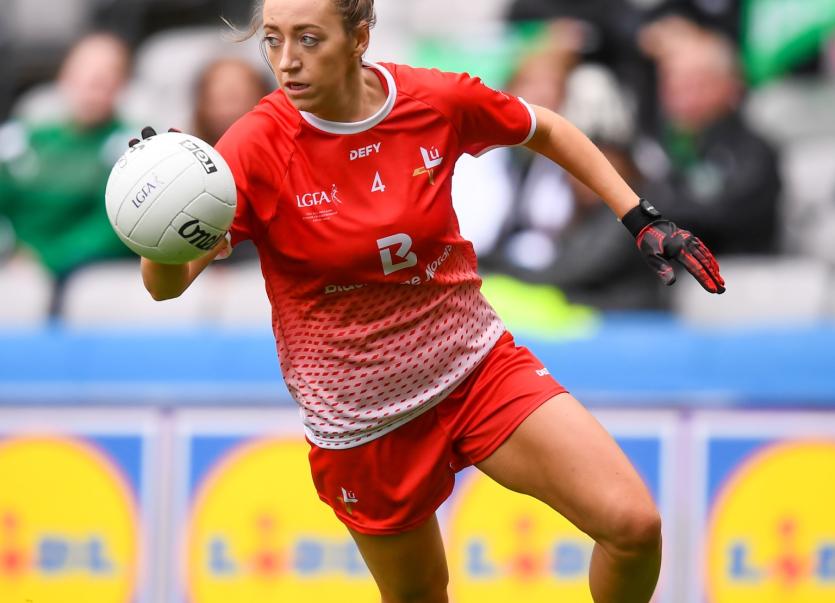 It came a little bit harder than anticipated, but the Louth Ladies booked their place in the Semi-finals with a win over Derry last Sunday.

Many expected The Wee County to run riot over the Oak Leafers, yet they presented a strong challenge at times, particularly when losing the influential Kate Flood to a yellow card midway through the second half.

Their captain Shannen McLaughlin always expected Derry to be a big test, however she does feel the final cushion of 14 points reflected her teammates overall performance.

“I’ve said from the start that there are no easy games in Division Four” stated the defender. “I felt all the teams were quite close, but I think we performed really well at times and showed what we’re capable of.”

“Derry put up a good fight, especially when Kate got sinbinned, but I think we kept our composure, they had a purple patch for around five minutes but we just kept tipping away at the scoreboard which led to us getting the result we deserved.”

It was the second time in three games the Girls in Red have been affected by a sinbin, Leitrim also mounting what ended up being a crucial comeback during the period where Sarah Quinn was on the sideline.

While she admits they must work on rectifying this part of their game, in her opinion she feels referees are being a lot harsher in the lower divisions on certain aspects of the game then they have been on the teams playing in Divisions One and Two.

“I don’t think it is a huge worry or problem at the moment, we’ve had our fair share of sinbins but I think all teams have. Derry had one as well and it seems like they are really trying to clamp down on it in Division Four for things like overcarrying or fouling.”

“In the game on Sunday, obviously it’s in the rules that if you get more than two ticks you get sinbinned, but for every foul he was ticking girls. Kate fouled twice in the whole game and on the third time she got carded and I don’t think normally that would happen.”

“None of the fouls were nasty or even above the shoulder. I think they allow a lot more contact in those higher tiers.”

Attention now turns to Offaly on Sunday, whom they meet in Clane in Kildare (Throw in 4:30PM), a side which so far has remained unbeaten following victories over Carlow at home and then Limerick on the road.

What adds some extra spice to the fixture is the fact they have been drawn into the same group in this year’s Intermediate Championship. Some shadowboxing is possible from both sides who will not want to give too many secrets away ahead of that later meeting.

However, The Clan Na Gael Clubwoman admitted that they have not even thought about championship yet, the league and promotion being their primary target this season.

“They have some really good footballers, their inside forwards are particularly good, and their backs are very strong, they are just a very good footballing team. They are skilful and we’d be expecting a huge battle this weekend.”

“I think we need to focus on the game ahead, the championship clash is on the backburner at the minute, there is no point thinking ahead as we have to win this game or we are out of the league and promotion is the most important thing to us at the moment.”

Louth have been knocking at the door of Division Three in recent seasons, coming closer and closer in the three years McLaughlin has been involved in the Senior setup.

Yet she has yet to be given the chance to vie for promotion in a one off final, that dream being what is motivating her and fellow Louth Gaels ahead of what is their toughest challenge to date.

“The last three years we have been so close, there or there abouts. My first full year with Louth we got to the Division quarter finals, the following year we got to a semi-final and lost out in the last minute of the game.”

“Last year with Covid we didn’t get a chance to finish off the campaign having been top of the table, so it would mean a lot to make the final and finally get a crack at getting out of Division Four, but we obviously have to win on Sunday before we can think about that.”