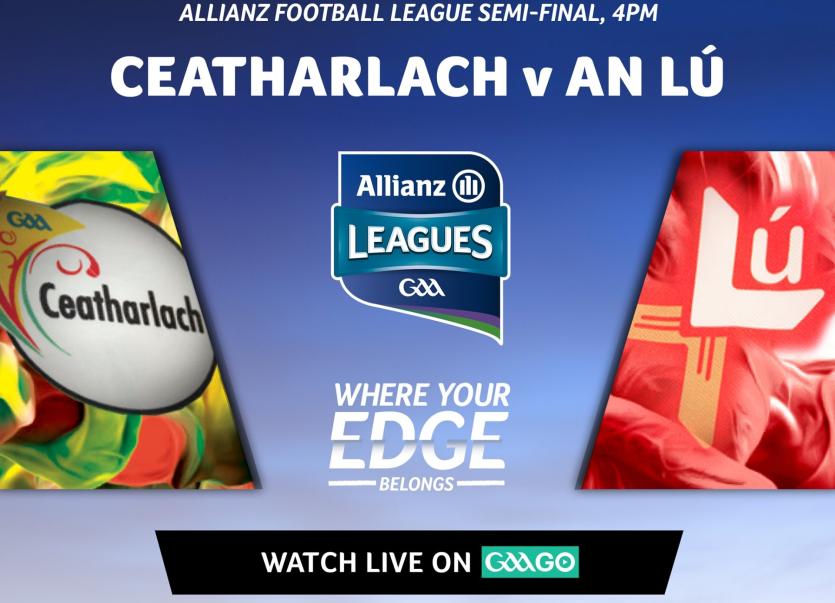 The game throws in this Saturday at 4PM in Netwatch Cullen Park. Photo: Louth GAA

After a rollercoaster of a National League campaign, it all comes down to one final match to determine whether the Louth Footballers will spend 2022 back in Division Three or will have to soldier on through another year in the basement of the GAA.

There will be no trophy or place in the final at stake tomorrow in Dr Cullen Park (Throw in 4PM), as both sides will begin their Leinster Championships in a little over two weeks’ time, promotion being the prize on offer. A vital component in both side’s long term development.

The Democrat has the lowdown on this pivotal clash, from recent meetings with the Barrowsiders, to their current league form. Plus a preview of what might be in store for both teams.

In recent seasons it has been Carlow that have had the Wee County’s number, two victories coming for the men in green and yellow in 2019 and 2018 respectively.

Their last meeting was during the 2019 National league, when both sides were still in Division Three and saw Louth make the trip to Dr Cullen Park.

Louth came into the game with great momentum following three wins in a row against Sligo, Laois and Offaly while the home side were coming into the contest off the back of losses to Offaly and Longford.

Carlow were a well drilled, dogged unit throughout the tie, walls of defenders leaving as little space as possible for the Louth attack to create scoring chances.

In a game which was always going to be tight, the evening’s only goal would prove decisive, midfielder Brendan Murphy producing a powerful solo run through the heart of the Louth defence, teeing up Sean Gannon to bury home calmly on 12 minutes.

The Wee County trailed by 1-5 to 0-4 at half time and had the opportunity to eke themselves back into the game after a black card for the influential Murphy, but they hit five wides during his absence.

They fought gallantly to get back into the game, three in a row narrowing the deficit and got within a point of their hosts late on, however their comeback surge was dented by a second bookable offence for Declan Byrne and a black card for Ciaran Downey seeing the Reds finish with 13 players.

Carlow showed plenty of resolve to see off the challenge, picking up a 1-10 to 0-12 victory in the end, however it was their last victory in a campaign that saw them relegated despite picking up five points while Louth ended the league midtable on nine points.

In 2018 it was the Leinster championship that proved the battleground, Louth and Carlow traveling to Portlaoise to meet in the preliminary round.

Once more it was a win for the Barrowsiders, but this time in a much more emphatic fashion as they ran out comfortable 11-point winners.

Again Carlow set up with defence in mind, walls and walls of defenders making it a tough afternoon for the men then managed by Pete McGrath.

Yet it was Louth that led for much of the first half, only to always be pegged back by their opponents who despite the fine margin of victory only took the lead for the first time deep into the opening period, taking a slim 0-10 to 0-9 lead into the dressing rooms.

That was a lead that the Barrowsiders never relinquished, some poor indiscipline from Louth allowing Carlow to slot over four frees in a row and from here there was only ever going to be one winner.

Louth only mustered three points in the second half, while goals from Diarmuid Walshe and Paul Broderick put a well deserved extra layer of gloss to the final score line, 2-17 to 0-12.

The last recorded win for the Wee County over Carlow came two years earlier in the first round of the Leinster Championship. They were 10 point winners that day, the hope is we something closer to that performance on Saturday.

In the Southern part of Division Four, Niall Carew’s troops were grouped with Waterford and Wexford meaning they have played one less game to date compared to Louth. The League’s uneven numbers due to London being unable to take part this year.

They began their season away to the Deise in Fraher Field Dungarvan, showing some sluggish traits early into their first competitive game of the year, yet had four of their six forwards on the scoresheet by half time to lead by 0-9 to 0-5.

Waterford did their best but they just couldn’t live with the attacking threat posed by Carlow, a Jamie Clarke goal the highlight of a strong third quarter which ultimately proved decisive.

The hosts were feeding on scraps but did their best to stay competitive, however with 10 minutes to go Colm Hulton rattled the net before deep into injury time Conor Crowley got his side’s third goal to start their league campaign with a 3-16 to 0-10 15-point win.

Next up was Wexford at home, a game where they knew a positive result of any kind was enough to seal a spot in the league semi-finals.

A Jordan Morrissey goal helped Carlow build up an impressive 1-3 to 0-0 lead after just 16 minutes, however from there they only raised one more white flag for the remainder of the half and lead by just a single point going into the dressing rooms for half time, 1-4 to 0-6.

Having lost to Waterford by a point, the Yellowbellies needed a win to be in contention for promotion and took advantage of their hosts ill-discipline, Carlow lost three players to black cards throughout the 70 minutes.

Goals from Sean Nolan and Liam Coleman helped Wexford build a five-point lead by the end of the third quarter, however Carlow dug deep and pulled a result out of the hat to clinch top spot it the group.

Deep into injury time, a Sean Ryan point looked to have sealed the win for the Model County, but John Murphy quickly replied, while in the dying moments Darragh Foley won possession from a throw in, created some space and fired home a valuable winner. 2-12 to 2-11 the final score

The result shows Carew’s side are never vanquished until the final whistle is blown; Louth will need to make sure they don’t leave any room for a comeback.

This one really could be a toss-up, both sides showing resilience to come from behind and bag vital wins on the last day of their round robin campaigns against Sligo and Wexford.

Both sides have been showing a real killer instinct in front of goal, the Wee County notching six in three games while the Barrowsiders have registered five in two games.

Louth have only given away two goals so far, one apiece against Antrim and Sligo, pretty much the only attempts so far. Outside of those two attempts they have kept their opponents well away from danger, they will need to keep their hosts at bay on Saturday if they are to be successful.

Carlow can be expected to once more be tough to break down, having only conceded two goals themselves along with just 10 points against Waterford and 12 versus Wexford. Louth have struggle to overcome this determined wall in the past, it will need to jumped highly to gain promotion.

Under Harte the boys in red have bagged 2-7, 0-12 and now 2-13 from open play so have been well able to overcome defences this season, if they keep up this scoring rhythm they could have enough in the tank to bag promotion having taken on what looks to be stronger opposition so far.

Although at times they have let teams back into games, see their poor second quarter showing against Leitrim. As Carlow showed last week they will take advantage of any window, no matter how short it is to make a comeback. Show any weakness on Saturday and they will be punished.