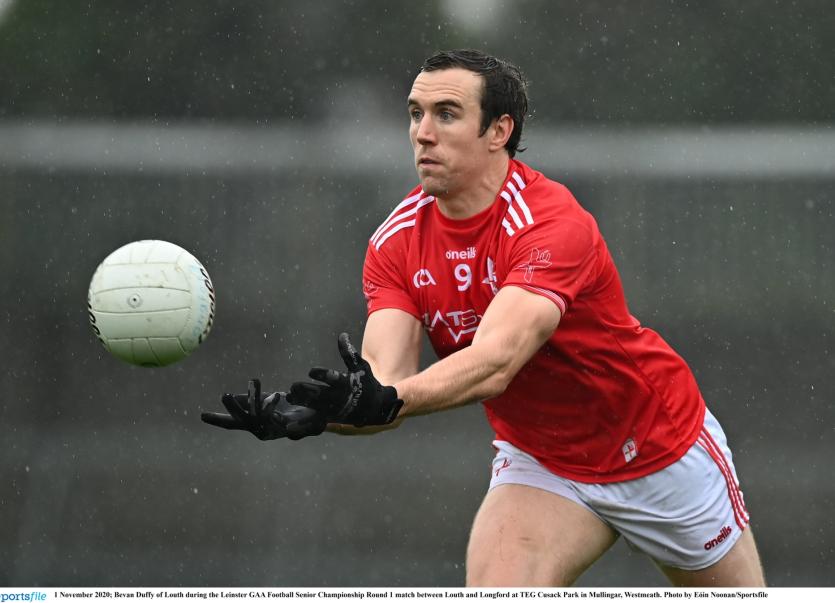 What a few weeks it has been for the Louth Footballers, from the lows of Antrim successfully snatching a win with pretty much the final kick of the game a little under a month ago, to the dubious highs of clinching a semi-final spot with a stunning comeback against Sligo.

Not forgetting an eventful afternoon in Carrick on Shanonn when the Wee County quite simply demolished a poor Leitrim outfit, the 2021 National League has been one for the ages as Mickey Harte has gotten his time in charge off to intriguing start.

With just a day to go until they finish off their Division Four campaign, former Louth captain Bevan Duffy has been speaking about the buzz around the camp ahead of what really is their most important fixture to date.

“There is a good buzz around the team and the squad in the last week” exclaimed the towering midfielder. “We were really sickened by the loss against Antrim, it really hurt, more so than a lot of other games we’ve played.”

“We responded very well, picked up the win against Leitrim, suddenly there is a bit of pep in out step, some good energy and people are enjoying themselves. We got the result against Sligo to continue our good momentum, so the build-up in training to the Carlow game has been good.”

A improving part of the Louth game has been their shooting this season, one which has been getting plaudits after every game with 2-7, 0-12 and now 3-13 notched from play from a total of 6-45.

The St Fechins playmaker is delighted to see the high scoring returning to their game, having showed his worth with two valuable points from distance against Sligo at a time when the men in red were struggling to find the target.

However what has stood out to him has been the county’s goal scoring threat, which coupled with rigid defence has left them in a great place to be extremely competitive against any side they may face this year.

“It’s great to see lots of lads chipping in with scores this year, but there has also been plenty of goal chances. We didn’t score any against Leitrim but realistically we should have scored at least two that day, we could’ve scored more against Antrim while in the Sligo game we kind of took our chances.”

“That is hugely positive, obviously it is great we are not relying on one or two players to kick the scores for us, but the other side of it is defensively we have been very solid. We’ve only conceded two goals, looking back they are the only real goal chances we’ve given up to teams.”

“If you can get both those sides of that game right, which we have so far then you’ll go a long way to winning games.”

While the Carlow fixture will not strike any fear into a Louth camp that is playing with such confidence and swagger, recent results against our Leinster neighbours have not been good.

In their last meeting in the 2019 National League, Carlow came out on top narrowly by 1-10 to 0-12 in Dr Culllen Park while in the 2018 Leinster Championship the Barrowsiders won in emphatic fashion by 2-18 to 0-12 in Portlaoise.

Players will always reflect on bad days and be happy to incite some revenge, but in Duffy’s opinion it is only after a game that it plays on their minds and the negative results recently will have little baring on their preparations this week.

“I don’t think the recent losses apply into proceedings too much, they do more so when the game is over, I’ve been on the end of a bad drubbing in Tipperary and a few years later we turned it around and beat them down there to get promoted.”

“On my debut against Down we were beaten out the gate, a few years later we beat them to put us in a position to get promoted and stop them getting promoted. After the game you think about these factors but in the build up to the game, they really mean nothing.”

The pivotal match throws in this Saturday at 4PM in Dr Cullen Park, with all involved in the Louth setup expecting a significant challenge.

With promotion on the line and both team as big of underdogs as can be imaginable in the Leinster Championship, this is their All Ireland Final day and the former captain is raring to get a crack at a Carlow side he knows will be a significant challenge to overcome.

They have a lot of very good players, guys who are coming off a few good years with Carlow, we are going to have to do our homework and be on the ball to beat them. It is an important game, you wouldn’t really want it any other way.”

A shot at immediate promotion has always been the target for this team, one which now seems so close having looked possibly a million miles away when defeated by Antrim and behind at half time to both Leitrim and Sligo.

Yet they are now just 70 minutes away from Division Three Football in 2022, something the wily midfielder feels would be a just reward given the sacrifices and commitment all have given to the Louth jersey this year.

“We worked very hard during the lockdown on our own which is tough to do, motivating yourself time and time again to get training and get the work done, clock up the required numbers.”

“It is a great motivation as we have worked hard for it, but there is one more step towards that goal on Saturday, to finish the job and secure promotion and it would be a huge boost to be back in Division Three and trying to plot further jumps up the leagues in the coming years.”