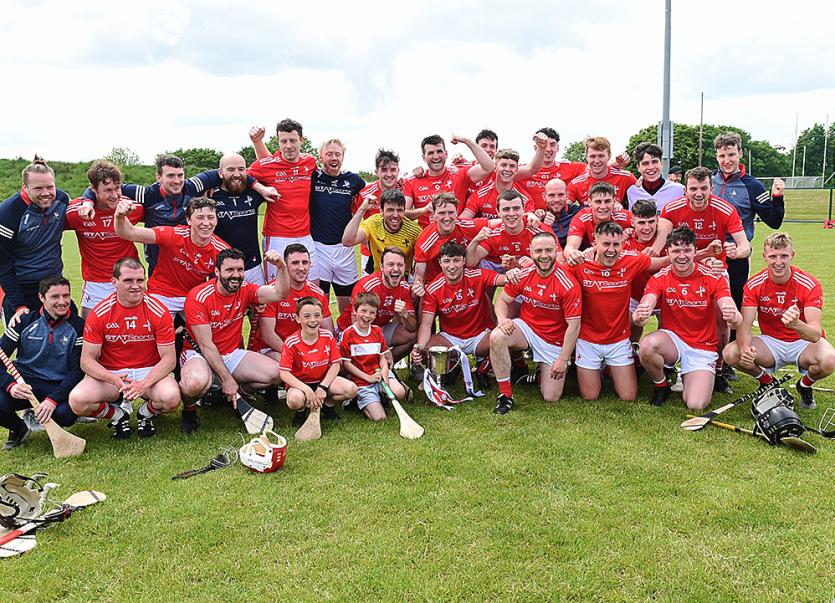 The Louth hurlers celebrate following their win over Fermanagh which clinched the Division 3B Title. Photo: Arthur Kinahan

A final quarter shellacking of Fermanagh saw Louth gain a deserved promotion at the first time of asking. As always with this current crop, this level of performance is always on hand, hidden somewhere, held in reserve until needed the most.

With the crunch game winding down; promotion on the line, Louth smashed into that reserve with devastating effect. Finally letting loose in Darver they outscored their Ulster visitors 1-5 to no score, to run out ten point winners.

On a great day for Louth hurling, the finale was doused with an overwhelming feel-good factor.

Substitute Ryan Walsh came in and nailed two stunning points, while midfielder James Costelloe was rewarded for his industry all day by popping up with the clinching goal.

Youngster Thomas McCreesh ended the scoring, Paul Mathews added to his man of the match winning tally and even full back Ronan Byrne got in on the act.

The aforementioned Mathews was the difference overall, the corner forward’s ability to get goals and sheer threat of getting his hands on the sliotar had Fermanagh’s defender’s nerves in tatters throughout.

The rangy St Fechin’s man had the ball in Mark Curry’s net by the ninth minute having already landed an excellent point shortly before that. His second goal after the break was instinctual, he reacted before anybody else when a Darren Geoghegan free shattered off the upright.

Despite it being a league game, there was a championship feel in the air, due to the sheer heat of the day and what was at stake.

Mathews sensed that most, and his intent was clear from the off. Louth sensed that too and fed him the ball at every occasion, he finished with 2-2 beside his name, top scorer on the park.

With the match winner already firing, things didn’t go as smoothly elsewhere, Paul McCormack made four changes to the side that has been unbeaten this year and those shifts and switches, until the finale at least, looked to have had an effect on their cohesion for long parts of the decisive clash.

Every line of Louth’s team sheet was disrupted bar the full back line, the half back line felt the change the most as Conor Quigley, in his debut season started centre back, Paddy Lynch dropped to wing back and Peter Fortune came back into the side at right half.

To compound matters, Quigley picked up an early yellow and because of that, had to be taken off. Regular number six Jamie McDonnell, whose grandfather passed during the week, came back in and settled things down around the middle third, while Niall Keenan also came in for Darren O’Hanrahan in the engine room at the same time.

Louth were struggling in that central area and crucially were conceding free after free. So despite Mathews blistering start, they trailed 0-6 to 1-2. Fermanagh rattled off three placed efforts in a row from the impressive Seán Corrigan to stamp their dominance on the game.

The deficit could have been worse for Louth because Fermanagh were all the while heavily totting up the wides. Newcomer Seán Kerrisk was excellent and was a selection gamble that worked. Louth desperately needed a score at this stage and he showed composure beyond his years to level.

Kerrisk was the perfect foil for Mathews, the club mates had a visible understanding inside and linked up very well with each other. With Mathews claiming any of the high balls and Kerrisk scraping for low balls in.

With those two working in tandem, Louth had a variety to their attack although hero against Cavan, Seaghan Conneely felt the squeeze at full forward, both his club mates either side of him had goal chances before the half was out.

Usually Darren Geoghegan eases his way into proceedings but he was really worked on the day by his marker Luca McCusker and the length of his free’s was sublime, The Moninne man showed supreme concentration to land three tough free’s and 65’ before half time to give Louth a 1-9 to 0-11 lead.

When Fermanagh midfielder Francis McBrien clinched his fist in celebratory fashion with the leveller straight after half time, Louth surely felt uneasy. However Geoghegan settled the doubts with another 65’.

Just when it looked like Geoghegan was about to add another point from a placed ball, the left hand post got in the way. The sliotar broke and Louth willed someone in red to be under it. In what seemed to be an age, quick thinking Mathews buried to the net off the ground.

Louth as per form, eased off after the goal and let Fermanagh back into things, old nemesis John Duffy found the range to half the lead from four to two.

Once again Kerrisk showed his maturity to point when others were fluffing opportunities to extend the lead, but Corrigan at the other end, still made it 2-11 to 0-15 at the second half water break.

At that point, no question, the game, perhaps season, was in the melting pot. What was said we’ll never know, but everything went right from that point onwards.

The freshness off the bench came to fruition, the solidity of the full back line was unnerving, with that balance in tow, confidence streamed into Louth’s veins and everything went right.

When all is said and done, Louth met expectations head on with three wins from three and Louth captain Feidhelm Joyce had the honour of being the first man to be presented with a cup from new GAA president, Uachtarán Larry McCarthy.