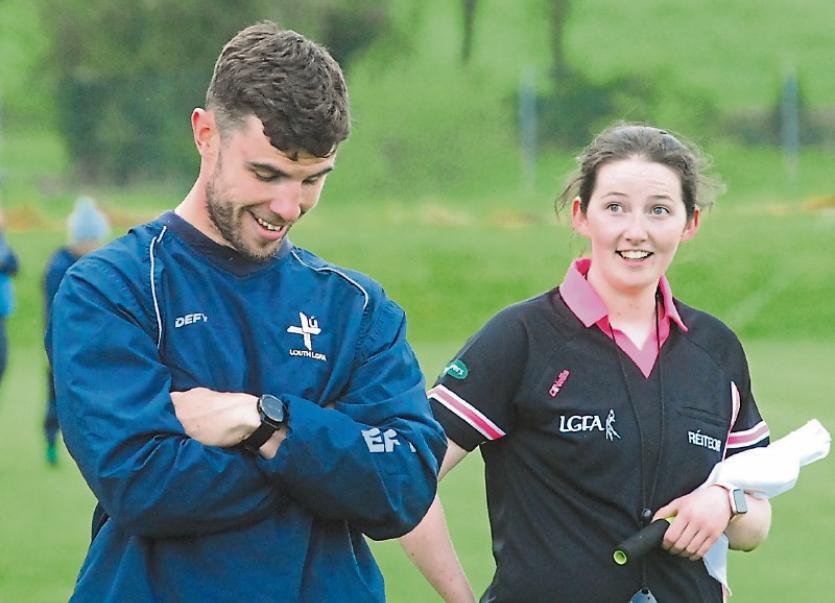 Louth LGFA manager Wayne Freeman has been impressed by his troops threat in front of goal in this year's National League. Picture: Willie Donnellan

The Leitrim game was one to forget for the Louth Ladies, one filled with dubious calls, one where they let a half time lead slip and ultimately a game that ended with the Westeners taking the vital two points from the battle of the group’s top two teams.

That result was a tough one to take, but to their credit they reacted in fine style by putting on a glittering performance that put them back in the promotion mix, 18 points their margin of victory against an Antrim side already on the board in this year’s National League.

“We were happy with the win, that was first and foremost what we needed from the game” exclaimed their jubilant manager Wayne Freeman when dissecting their performance after the match.

“We played some good football, we moved the ball well, we defended a lot better than we did last Sunday. There was improvement from Leitrim and that’s what we wanted.”

“I thought we kicked well in the first half, moved the ball into space impressively at times through the kick, we probably kept the ball in hand a little too much at times which is something we will have to look at.”

One characteristic that has flowed through the Wee County’s opening two Division Four matches has been their ability to notch up goals.

Niamh Rice, Lauren Boyle and Laura Collins have blasted the ball into the net two weeks in a row, while Denise McKenna produced the goods against the Saffrons resulting in Louth scoring seven goals in 120 minutes of action.

Freeman has been impressed by his troops attacking prowess so far; not forgetting they have also gotten 15 of their 20 points so far from open play, yet he still feels their is plenty for them to work on ahead of a meeting with Derry next week.

“We have some fantastic forwards and in fairness they seem to be a real goal threat, so I’m delighted that’s the case and it is just about giving them the ball and letting them do their thing.”

“We need to try and get them within 30 meters of the goal and let them do their stuff. We are happy enough but we can definitely improve upon that again, we’ll look at the areas where we weren’t so good and try and improve on that next week.”

While the forwards took up much of the praise, in defence Louth only gave away eight points and in particular the Kildare native noted the plaudits of Ceire Nolan who has been in flying form since returning from a cruciate injury last year.

He has been blown away by her desire to stay around the team while also doing everything in her power to get back to fitness, feeling she is a fantastic role model for the younger members of the squad who see how much dedication it takes to excel at the very top of the sport.

“Ceire is phenomenal, over her whole recovery she was absolutely exceptional, she’d be an inspiration to any young player who has had a serious injury, her attitude throughout the whole process was positive, she stayed around the squad throughout it and never left it.”

“She worked unbelievably hard, her running had improved even before she done her cruciate so it is a testament to her mentality and she was brilliant again today, I thought she did superb last week as well so it is great to have her back.”

While The Wee County were comfortable winners when they last faced Derry in the League, Freeman is taking nothing for granted this season and he is expecting a much stronger challenge from the Ulster side on Sunday (Throw in 2PM).

“Derry are a much-improved outfit from last year, so we have to prepare ourselves, try and perform to the best of our abilities and if we do that it should be enough. We will just be taking training day by day this week and we’ll see how we go.”