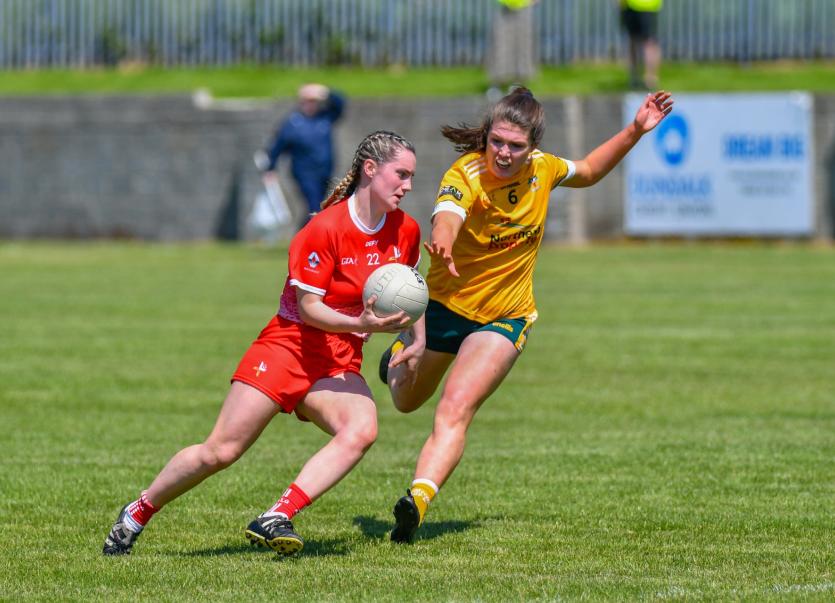 Louth kept their hopes of league promotion alive thanks to this dominant display against Antrim in sunny Clan Na Gael.

Eager to respond following disappointment against Leitrim last week, Louth stormed out of the blocks, bringing tremendous work rate and intensity to the tackle, leading to the Wee County turning over their opponents and making it count in ruthless fashion on the scoreboard.

Facing into a breeze in the first half, Louth’s movement of the ball through the hands was impressive at times.

With that intensity, the home side set the tone from the start and led by 1-5 to 0-2 by the time referee Eddie Cuthbert blew for the first water break.

Central to this was Clan Na Gael’s Denise McKenna. Wearing 15, but operating at number 11, McKenna was central to so many of Louth’s attacks playing on her home patch.

Manager Wayne Freeman described her as “an outstanding addition to the squad” in his post-match reaction.

Excellent work rate and intensity in defence meant that Louth had turned over Antrim 12 times in that opening quarter, whereas Antrim turned Louth over six times, with Ceire Nolan, captain Shannen McLoughlin along with full back Sarah Quinn and Aoife Russell meriting plaudits.

Following excellent support play from Lauren Boyle and Niamh Rice, McKenna opened the scoring for Louth inside the first minute.

The wily forward then set up Laura Collins for point number two, before Niamh Rice wearing 22 struck for Louth, giving them a 0-3 to 0-1 lead after 8 minutes, with Niamh Enright getting Antrim on the scoreboard.

Aine Breen who finished with 23 possessions over the hour, set up Lauren Boyle for another white flag for Louth, before a shot from McKenna looped over Antrim keeper Anna McCann and into the net to make it 1-4 to 0-1.

Cathy Carey converted a free for Antrim before Niamh Rice danced her way through the Saffron cover to blast over the bar to give Louth a six-point buffer going into the water break.

McKenna continued to cause havoc, as she set up Laura Collins who was fouled in the large rectangle. Collins converted the penalty, before a point from Geraldines’ Rebecca Carr gave Antrim a real mountain to climb at 2-6 to 0-2.

Antrim simply had no answer to Denise McKenna, Niamh Rice, Lauren Boyle or Laura Collins and Collins’s goal bound attempt was bravely blocked behind for a 45.

From that set piece, McKenna set up Boyle to score from play. The Cooley star then converted a free moments after to make it 2-8 to 0-4 in Louth’s favour at the break. Aoife Taggart sent over a magnificent effort from play, while first half sub, Ellen Morgan raised white flags for Antrim.

There was no sign of letting up from Louth, as three minutes after the restart, Rice once again danced her way through Antrim defenders and crashed the ball to the net for their third goal after Antrim had kicked the opening score of the half through the excellent Cathy Carey, who finished with 0-5 points to her credit.

Niamh Rice, who touched the ball 17 times, converted a free and then set up Rebecca Carr to score Louth’s fourth goal, making it 4-9 to 0-6 after 45 minutes. Rebecca Carr finished with 19 possessions in the match herself.

Carey continued to take the fight to the home side, raising all four of Antrim’s second half white flags. Two further scores from Lauren Boyle, and one each from Laura Collins and Rebecca Carr continued to keep the scoreboard ticking over for Louth.

There was also time for second half sub and former Aussie rules star Kate Flood to send a free kick over the bar having missed last week’s loss to Leitrim through injury, her return to play a huge plus to Louth’s 2021 prospects as her late score saw them seal a comfortable 18-point victory.

The results tees things up nicely, with Derry the visitors to Clan Na Gael next weekend having already suffered defeats at the hands of Leitrim and Antrim.