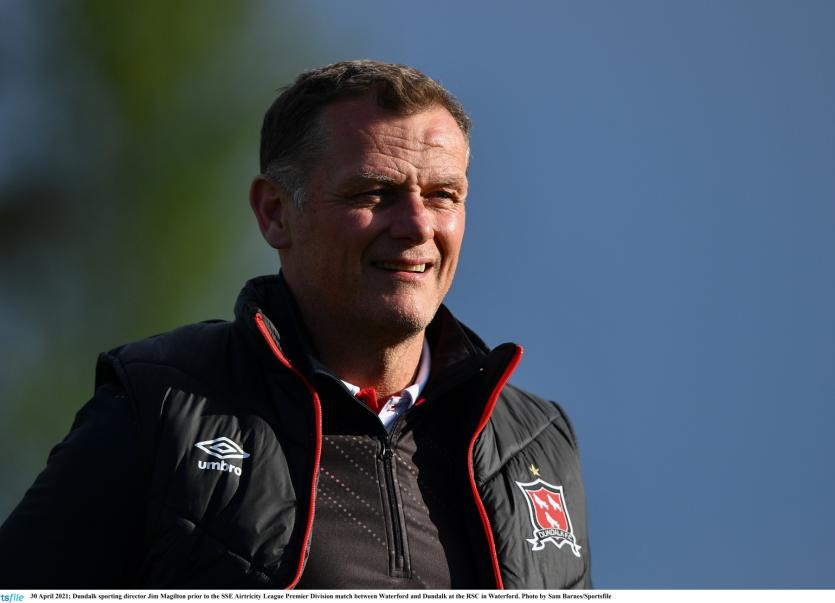 Dundalk Sporting Director Jim Magilton has spoken about a possible clear out in the Summer, as the club try to rectify their poor consistency this season. (Photo by Sam Barnes/Sportsfile)

Jim Magilton has confirmed that Dundalk FC will be in the market for a new goalkeeper – as well as outfield players – once the summer transfer window opens at the beginning of July.

The Lilywhites have, on average, conceded more than one goal in every game in this season’s SSE Airtricity League, and were thrashed 5-1 by Bohemians at Dalymount Park on Monday.

Next up for seventh-place Dundalk is another trip to the capital, where they face St Patrick’s Athletic on Friday (kick-off, 7.45pm) in what is their last fixture before the mid-season break.

Managed by ex-Dundalk favourite Stephen O’Donnell, St Pat’s are currently third in the table and occupy the last guaranteed European position – 11 points ahead of The Lilywhites.

“When you lose in that manner, it’s always difficult and it’s always personal,” said Magilton.

“Credit where credit’s due – the players have come in, licking their wounds of course. Training has been really spot on and they’re positive.

“We’ve got to go and present ourselves again tomorrow night against a really good side.”

After being humbled by Bohs, interim manager Magilton – who is also the club’s sporting director – claimed that he intended to oversee a summer ‘clear-out’ of players at Oriel Park.

“That was venting personal frustrations,” he revoked.

“You tend to say things and maybe overreact, and a man of my experience – it was just venting.

“At any football club, there’s comings and goings. We’re coming into a window, so if we can bring in people that are going to improve the squad, we will do.

“You have to remember that all players want to play and if they’re not playing, they’ll want to go somewhere where they are going to play.

“We’ll be looking at who does go. It’s a duty of care on all aspects of the game. I learned that from the great Sir Bobby Robson, who told me that and taught me that.

“At the end of the day, players are players and they want to play and you’ve got to look after those who come and go, so we’ll be trying to do that.”

Magilton confirmed that Dundalk are looking for a new goalkeeper this summer, with Alessio Abibi and Peter Cherrie both failing to show consistency between the sticks so far this year.

“We can’t get away from the fact that goalkeepers have made mistakes that ultimately have cost us games and points."

For the game against St Pat’s on Friday night, Dundalk could welcome back Patrick Hoban, who has missed the last seven matches due to the calf injury he sustained over a month ago.

“It gives the rest of the group a boost of confidence,” added Magilton.

“When you have a player of his quality in your team and in your squad, it’s huge because he’s a proven goalscorer, he’s a character, he’s a voice and he has a personality."

“Every team needs them and the hardest thing in football is scoring goals and we’ve got a goalscorer. If we can create enough chances, he most certainly will put the ball in the net.”

Dundalk will, however, be without Sonni Nattestad and Ole Erik Midtskogen, who are injured; while Cameron Dummigan is suspended following his dismissal in the Bohs match.