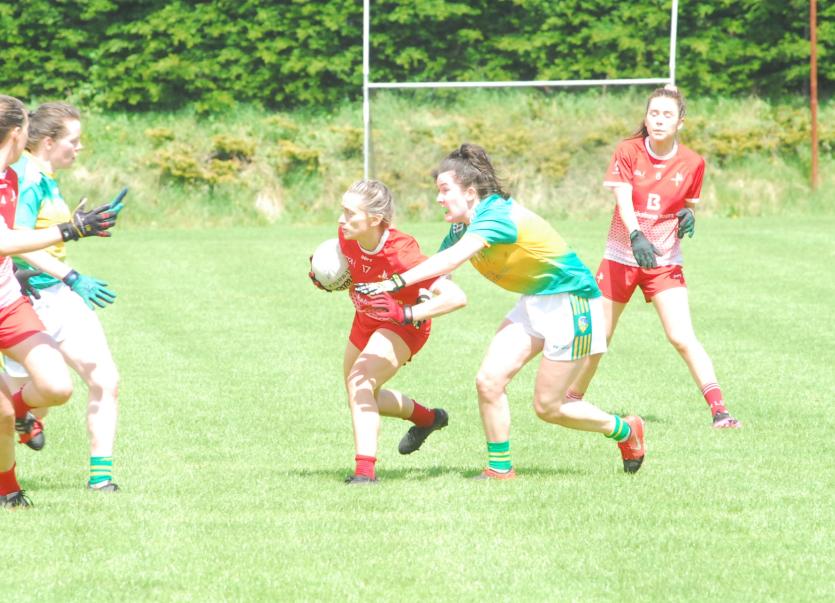 It was a day to forget for the Louth ladies, as sinbins, a red card and missed opportunities came back to haunt the girls in red who lost in the league for the first time under Wayne Freeman having gone unbeaten in their four games last season before Covid-19 voided the rest of the competition.

One of those wins was against Leitrim in Cooley last year but the Green and Gold made sure they got their revenge with a powerful second half display as they turned a two point deficit at the break into a comfortable eight point victory.

Comfortable it may have been on the scoreline but on the field, it was a battle as Louth, minus Ladies Aussie Rules star Kate Flood, took the game to Leitrim and should have punished the home team far more but for some bad misses.

Central to their turnaround was a triple substitution that saw former Cavan All-Ireland Intermediate winner Ailish Cornyn arrive on with new teammates Carla Le Guen and Ailbhe Clancy just before the break and all three played a big role in turning the game around.

It also helped that Louth lost a player to the sin-bin at the same time and it enabled the hosts to gain a foothold around the middle of the field, something they never let go for the remainder of the contest.

That sin-binning and a later red card from Offaly referee Kelly Cunningham certainly did not go down well with the Louth management and they made their displeasure known as they felt that two Leitrim players should have been carded late on.

But there was no doubting that when the pressure came on in the second half, Leitrim were the stronger team, helped by the luxury of holding marquee forward Muireann Devaney back until the 40th minute.

She was able to continue her goal scoring exploits of the weekend with Athlone Town in the top of flight of Women’s soccer a day earlier by bagging Leitrim’s third and final goal.

Louth opened brightly and, but for some poor finishing, would have had more than Rebecca Carr’s third minute point for their efforts.

Michelle Guckian finished well after a nice pass from Roisin McHugh to put Leitrim on the scoreboard, but the impressive Laura Collins hit back with a lovely point from the right corner for the visitors.

Leitrim edged in front with two in the space of a minute from Guckian and Vivienne Egan, straight from the kickout. Laura O’Dowd, on her home pitch, quickly added another on eight minutes.

The Wee County missed three good chances, one from a free, and it looked costly when a long ball to Shayln Ward was knocked into Guckian, the full-forward producing a great run and sidestep to score a fabulous goal for Leitrim.

Roisin McHugh almost got a touch to a long free to fist the ball to the Louth net a for a quick fire second goal, however Una Pearson in goals cleared the danger.

It proved costly as Freeman’s troops scored within seconds of that miss, Niamh Rice’s hard work freed Laura Collins who drilled the ball into the Leitrim net on 17 minutes.

Both teams swapped wides but the visitors took the lead in dramatic fashion when Rice raced in from the fifty yard line, cutting through the Leitrim defence with ease and then finished brilliantly to fire her team two points in front.

Carr added a great point from long range a minute later but good work from the industrious Roisin McHugh again set up Guckian for a point.

Louth were in the ascendency at this point when full-back Sarah Quinn won the race for the ball but was adjudged to have planted her shoulder into a Leitrim player.

A yellow card and sinbin followed although Guckian’s resulting free was chalked off the scoreboard by the referee for a square infringement.

Crucially, Leitrim manager Hugh Donnelly had decided enough was enough as he sent on new recruit Ailish Cornyn, Ailbhe Clancy and Carla Le Guen and the trio would have a significant impact on the contest right from their introduction on 27 minutes.

Lauren Boyle did stretch the lead back to three points after a great run from Rice but a Guckian free in added time ensured that Louth led 2-5 to 1-6 at the halftime break.

Leitrim started on the front foot in the second half with Louth’s Collins seeing her shot blocked while Lauren Boyle hit a wide for the visitors after good work from Leah Fox and Laura O’Dowd set up the impressive Guckian for a point.

Freeman had reason to be aggrieved with the officials when Quinn got back on the field after 13 minutes of action, the referee insisting that only ten minutes of actual playing time had elapsed.

Leitrim decided to add some firepower to their attack when Muireann Devaney, scorer for Athlone Town on Saturday in the Women’s National League, replaced Elise Bruen.

Donnelly’s troops were starting to win the midfield battle and after Vivienne Egan scored from long range, Ailish Cornyn, in her first appearance for Leitrim since her transfer from Cavan, got her first point for the Green and Gold after a good team move.

Louth sub Eilis Hand had a shot blocked and Leitrim took control of the game 17 minutes into the second half when Devaney intercepted a horribly misplaced kickout from Pearson, setting up clubmate Leah Fox for an easy goal.

It got worse for Pearson as she was then pinged by the referee, somewhat harshly, for delaying the kickout with Guckian tapping over the free. The Leitrim taliswoman added another free, courtesy of what again seemed like a harsh call.

It got much worse for the Louth when influential midfielder Eimear Byrne was red carded for retaliation after her team won a free.

Their feelings of grievance were heightened later in the match when Devaney and Leitrim captain Clare Owens escaped sanction from the match officials for heavy challenges.

Devaney finished the game as a contest with a 1-1 in 60 seconds, the goal allowing the wily forward to display all her soccer skills as the ball appeared to squirm from her grasp but she took the ball around the keeper and slotted it home soccer style.

Guckian finished the Leitrim scoring with a free two minutes from the end of normal time but Louth refused to throw in the towel, Lauren Boyle scoring a remarkable solo goal as she ran across the face of goal pursued by two defenders but still managed to squeeze her shot between keeper Michelle Monaghan and the post.

Louth would add a further point from Rice to complete the scoring but it still left Leitrim eight points to the good in the meeting of the group’s top two teams.