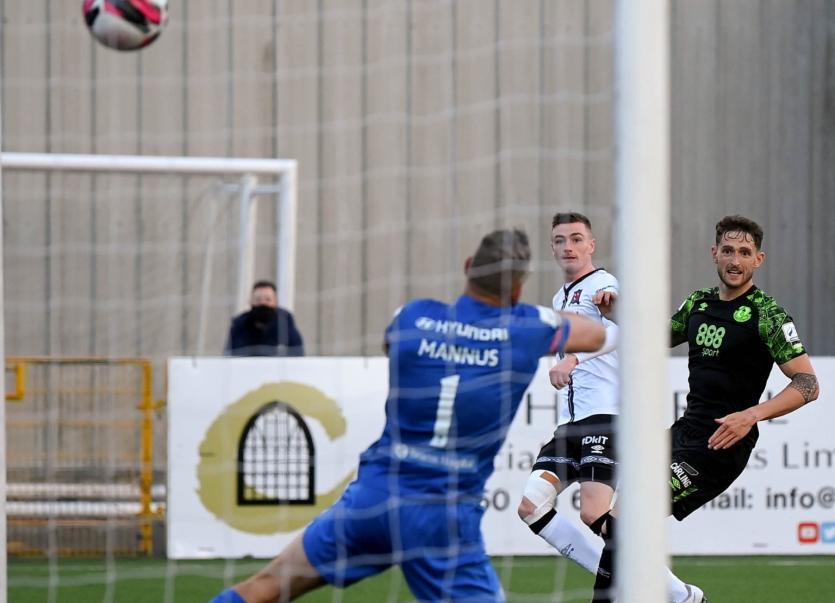 A view from behind the goal as Daniel Kelly struck the net for a decisive second goal against Shamrock Rovers. (Pic: Stephen McCarthy/Sportsfile)

Shamrock Rovers’ unbeaten run in the SSE Airtricity League has finally come to an end after they suffered a 2-1 defeat to Dundalk in what was a more than eventful evening at Oriel Park.

The Lilywhites went ahead early on through Patrick McEleney’s opener, but were pegged back a matter of moments later when Joey O’Brien equalised for the defending champions.

However, the returning Daniel Kelly’s superb goal on 59 minutes proved to be decisive.

A large band of disgruntled Dundalk supporters congregated outside the ground about two hours before kick-off in a protest against the club’s Florida-based chairman, Bill Hulsizer.

As the protest continued, interim manager Jim Magilton made six changes from the previous week’s draw at Finn Harps, with club captain Chris Shields restored to the starting line-up.

He took his place in what was a depleted Dundalk defence; while Kelly, Cameron Dummigan, Sam Stanton, McEleney and David McMillan also returned to the fold.

O’Brien, Sean Gannon and Aaron Greene came in as the three alterations for Rovers.

Dundalk hadn’t beaten Rovers in a league fixture since September 2019 and on that night, The Lilywhites secured what was a fifth league title in six years. How times have changed.

Incredibly, that was the last time The Hoops lost in the league, and they were dominant early on at Oriel, as Alessio Abibi parried away from Graham Burke’s corner inside 30 seconds.

Playing at wing-back, the in-form Liam Scales hit the underside of the crossbar minutes later.

Against the run of play, Dundalk took the lead on 11 minutes when Daniel Kelly played in McEleney, who showed great composure and strength before finishing beyond Alan Mannus.

Dundalk’s lead lasted just two minutes, however, when another goalkeeping mistake from Abibi – along with some slack defending – allowed O’Brien to easily finish from close range.

Stephen Bradley’s record-breaking side continued to dominate proceedings after that, but it was in fact Dundalk that had the best chance of what remained of the opening 45 minutes.

McEleney did well to retain possession before planting a wonderful cross which found Michael Duffy at the far post, but the imposing Mannus was more than equal to his effort.

Early in the second period, Greene lobbed the outrushing Abibi, but the attempt came off the bar, while not long after that, Burke curled a brilliant effort which crashed off the post.

However, in another twist just before the hour-mark, Dundalk restored their lead when from McEleney’s pass, Kelly’s scorching effort gave Mannus absolutely no chance whatsoever.

As the game entered it’s latter stages, Danny Mandroiu had a free-kick attempt well saved by Abibi, while at the other end, a Raivis Jurkovskis rasping shot fizzed inches wide of the post.

Ole Erik Midtskogen should have wrapped it up late on, but his close-range attempt was saved by Mannus, before Greene saw his free header hit the post in the dying embers.