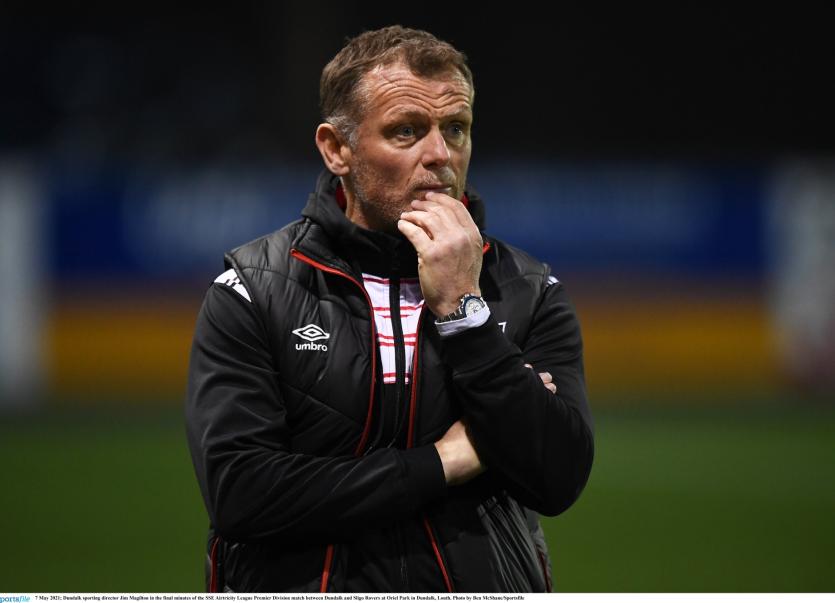 Dundalk FC Sporting Director Jim Magilton has confirmed talks with former Donegal GAA boss Jim McGuinness have happened, but he has remained quiet on what, if any role he may fill at the club

Jim Magilton confirmed that he’s spoken to Jim McGuinness, but has remained coy on speculation the former Donegal GAA boss could become the next Dundalk FC manager.

McGuinness – who guided Donegal to All-Ireland glory in 2012 – served as a youth coach at Celtic before becoming assistant head coach at Chinese Super League side Beijing Guoan.

The 48-year-old Glenties native became head coach of USL Championship outfit Charlotte Independence in 2019, but recorded just one win from his 15 games in charge of the club.

“He could be (in the running),” Magilton told reporters at Thursday afternoon’s presser.

“I haven’t ruled anyone out. I spoke to Jim. I find him very interesting. I’ve always been a huge fan. I’ve always loved GAA and I liked his approach to Donegal – a winning brand.

“Jim has been a successful manager, albeit in a different sport, but I believe there is crossovers and there’s no question about that.”

Candidates such as David Healy, Gerard Lyttle and John Sheridan have been linked with the vacant post at Oriel Park since Shane Keegan and Filippo Giovagnoli’s departure last month.

However, it is understood a new manager won’t be in place until after the mid-season break.

“I’m a huge fan of what Stephen Bradley has done there and I like the way they play and set up. Like most of us, they’ve picked up injuries and suspensions and that weakens them.

“When you’re on that run of momentum, confidence, belief – you can see that it just pours out of them.

Disgruntled supporters of the club have planned a ‘peaceful’ protest against Dundalk chairman Bill Hulsizer, which is due to take place along the Carrick Road at 6pm on Friday.

Magilton met with a group of supporters on Wednesday evening, with aims of averting the protest, but indications from the group suggest that the meeting was largely unproductive.

A statement confirmed that the club were unable to give assurances of Hulsizer’s willingness to participate in any future collaborative communication between the club and its supporters.

“We had a couple of hours of really good chat,” said Magilton, in spite of this fact.

“I always like end product in anything we do. There has to be a practical element to this.

“Hopefully, the practical element of the conversation we had last night is around a steering group and having conversations with the club in the best way to interact in direction with the club and the supporters and hopefully to get to that point.

“In terms of having a supporter on the board, I think that’s a little bit far-fetched at the minute.”

Magilton confirmed that Daniel Cleary will be out of action for ‘months’ with a hip injury.

He joins Brian Gartland and Patrick Hoban on the Oriel treatment table, but Cameron Dummigan, Daniel Kelly and David McMillan could all return for the clash with Rovers.

However, Sonni Nattestad and Wilfried Zahibo picked up knocks in training and are doubts.

Friday night’s game between Dundalk and Rovers is available to stream live on WatchLOI.