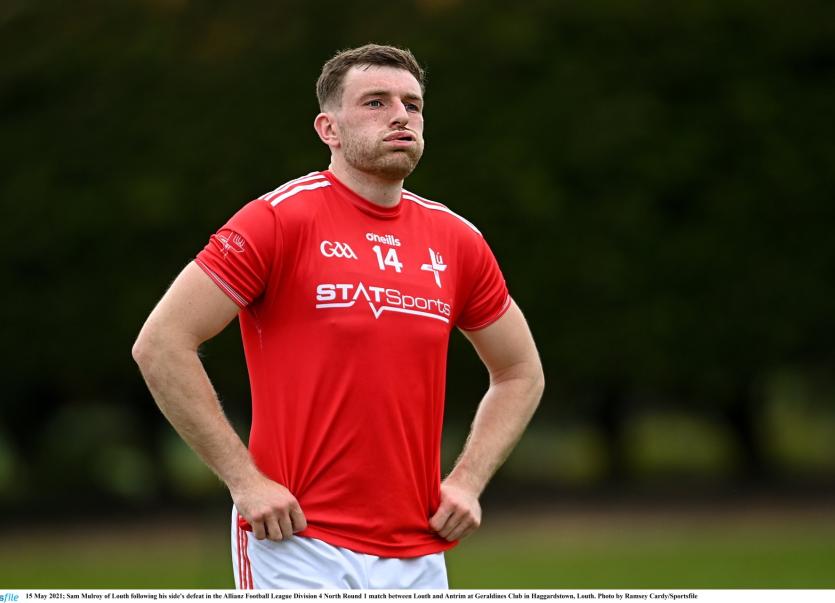 For Sam Mulroy Saturday could have a dream come true, as with minutes to play it looked as though he had bagged the pivotal goal to see off Antrim on the occasion of his first day as captain of the Louth Footballers.

But as the overly used cliché says, it is not over until the final whistle blows and unfortunately for the talented attacker there was plenty of time for the Saffrons to strike back, which they duly did with three points in a row to put an end to those dreams of a perfect start.

While the St Martin’s clubman got his sides third goal, he feels it it’s the next passage of play which led to their demise, sapping their upward curve and giving the visitors the lease of life needed to bag the win.

“They bounced back pretty well after another goal chance which I should have buried, which swung the tie a little bit as they went down and got a point off that miss” he recalled.

“Momentum swings and they took advantage of it, we should’ve killed the game off when I got that goal to put us two in front, we didn’t and we maybe need to be a little cleverer in the coming games, manage the game a little better as we paid the price today.”

Two of those three scores came from the boots of substitutes brought on by Enda McGinley, with Mulroy impressed by the outrageous attempts they were able to make so late in the contest.

He feels the Antrim bench had a huge role in their win but stressed that it’s always easier to chase a game rather than try to defend it.

“They were shooting with the wind in the dying minutes of the game and it is a little bit simpler when you are coming on as a sub kicking with the breeze to back you up, but I always think it is easier chasing the game than it is trying to protect the lead and they probably caught us out.”

“We were trying to hold possession, get a hand on the ball and they were coming with momentum, got those few huge scores in a row which is what killed us in the end.”

“The lads that came on for us done their best, as everyone did but they didn’t have the impact we would’ve liked and that’s the way it goes sometimes, hopefully it is a different story next week.”

Looking back on the contest, the talented forward had to reflect on his sides attacking prowess which saw eight different players get on the scoresheet.

He was delighted to see his side not relying on one name to get the points and was impressed by his teammates willingness to take on any opportunity, yet he knows that the wides tally (five in the first half, three in the second) cost them dearly and will need to be rectified if they are to push for promotion.

“It was brilliant to see lads popping up all over the pitch taking good scores, even seeing lads who tried to take shots from tough positions and missed, that was definitely a positive.”

“We created enough chances to win the game by probably ten points, but that’s the way it goes and you live and learn from these things, you have to be ruthless as at the end the day we didn’t take the chances we got and we were punished.”

For most people the game in Haggardstown will be remembered as the day Mickey Harte finally took to the sideline, but it shouldn’t be forgotten that it was also a massive day for Sam and his supporters.

He finally got the honour of representing his county as captain, a day he will not soon forget, but he knows the accolade will mean little to him if results do not start turning in their favour as the year progresses.

“It was a huge joy to be out on the pitch, playing football and leading the team out, so for me it was a big day. It was a pity my family couldn’t have been there, but that’s the way it is at the minute.”

“I’m absolutely honoured to captain Louth and I’m looking forward to the rest of the season but it doesn’t really matter if we don’t start winning matches, hopefully we can start putting in some more good performances and come out on the right side of the results going forward."