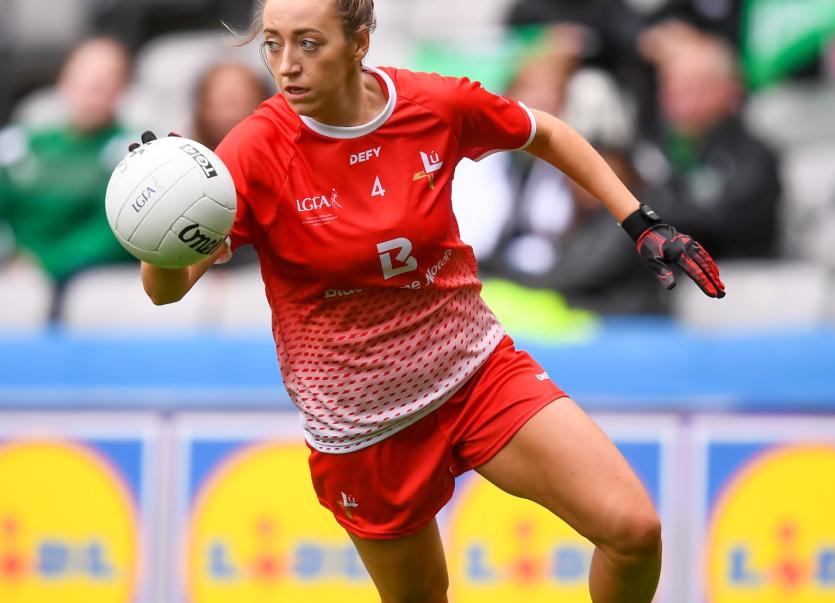 Shannen McLaughin is looking forward to leading her county into battle in 2021, a huge honour having only taken up the sport a few years ago

Shannen McLaughlin has not gone down the conventional path when it comes to her journey with the sport of Gaelic football, but that doesn’t mean she hasn’t been extremely successful.

In 2019 in just her second season with the county setup, the Dundalk native was part of the Louth team which won the All-Ireland Junior Title in Croke Park.

So impressive was her skills that she was named vice captain last season and has been promoted to captain for 2021 with Aoife Byrne unavailable, not bad for somebody who only took up the sport five years ago.

“I was in college in UL in Limerick where I played some basketball and rugby and there were no teams in Dundalk, so I ended up joining Clan Na Gael five years ago” recalls the defender on how she got involved in football.

“I got called up to the panel a year later and haven’t look back, to even play with the group of girls we have this year is a privilege let alone be their captain, so I’m just delighted to get this opportunity. It’s incredible, I can’t really put it into words what this honour means to me.”

Just like their counterparts playing under Mickey Harte, Wayne Freeman’s troops will be in Division Four of the National League this season, having been drawn with Leitrim, Derry and Antrim in the condensed format of the competition.

The 2020 league was one Mclaughlin looks back fondly on, having been the dominant force last season, topping the group after wins over Antrim, Leitrim, Derry and Limerick before the competition was halted due to Covid-19.

Unfortunately, instead of playing the final rounds of the League, the LGFA made the decision to abandon the competition thus robbing the Wee County of a chance at promotion.

That setback has galvanised her teammates, who she feels are hungrier than ever to make amends for that disappointment this season.

“We were in great form and everyone was enjoying the vibes in the camp so it was so disappointing to see games come to a halt as we had won the All Ireland the previous year and winning the league was one of our biggest goals, it’s left us really hungry going into the league this year.”

“But at the same time there is some very good teams in Division Four, we are aware there is going to be huge competition and we won’t be resting on our laurels, we will really have to perform if we want that title which isn’t going to come easy.

Their league campaign begins with a trip west to face Leitrim this Sunday, a side which proved stiff opposition when they faced each other last season with Freeman’s troops running out narrow 1-14 to 2-10 winners.

Despite missing out on that game, the Clan Na Gael club woman knows the threat they posed and feels that they will need to start their year off with a win if they are to be in the title picture, given the condensed nature of this year’s competition.

“It was a really tough game last year, they were the best opponents we faced in the league but it will be great to get out and play a competitive game again, a tough contest first time out is exactly what we really need to get ourselves ready.”

“I think if you start off on a loss, then you’re under pressure for the following two games and we just don’t want that to happen, we will need to win every game to be certain of our promotion push continuing.”

The other two ties will be played at home with McLaughlin’s home club mooted as a possible venue for ties against Antrim (May 30th) and Derry (June 6th).

Both Northern sides were blown away by Louth last year, with The Saffrons falling to a 13-point loss and the Oak leaf County beaten by 18 points in what were empathic results got away from home.

Despite the large margins, the defender is taking none of those games for granted, feeling that a new year could see those sides’ offer something drastically different.

“I think the year that’s in it with the Covid situation, it is a clean slate for everyone, we don’t know what teams are going be like or what preparation they have done so I don’t think we can say with certainty that since we beat them last year, we’ll beat them again.”

“We just need to go and perform to our best, we cannot be worrying about what Leitrim, Derry or Antrim are doing or what they were like last year, we need to focus on performances and make sure we get the best out of ourselves.”

The newly appointed captain has her eyes firmly set on the National League, but it is hasn’t stopped her dreaming of a long Summer of Championship football.

In their first year back at the intermediate grade they defeated Longford before their dreams were ended at the hands of Westmeath.

McLaughlin is hopeful of her side being even more competitive at that grade in 2021 but stressed their main goal for the year was landing promotion.

“Division Four is the number one priority for us in the interim, but I definitely think looking forward we would be hopeful that we can be compete at intermediate level this year.”

“We had done well last year but we all knew we could have done better, in particular we were very disappointed with the Westmeath game, so it would be great to go out and perform at that level, try and reach a semi-final at least but overall the Division Four league is our number one priority.”

“The league will be the perfect platform for us to get stuck into the championship later in the Summer.”