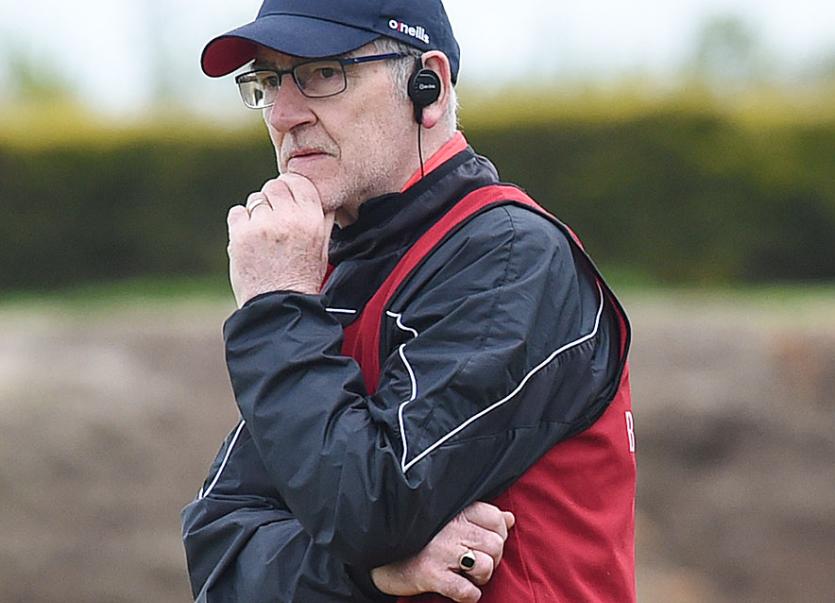 New Louth manager Mickey Harte looks on from the sideline during his first game in charge of Louth against Antrim. Picture: Arthur Kinihan.

There was heartbreak for Mickey Harte in his first game in charge of the Louth Senior footballers as a late score from Ryan Murray bagged the points for Antrim in Round One of the National League.

A brilliant goal on 65 minutes from captain Sam Mulroy had put the Wee County back in the driving seat going into the final minutes, but they failed to score for the remainder of the match as three points in a row saw the Saffrons head home with the win.

Little separated the two sides in the opening quarter, with both trading early blows, but it was Enda McGinley’s troops who opened up the first significant gap, a diagonal ball from Kevin Small finding Dermot McAleese in space who blasted it home past Martin McEneaney to go 1-3 to 0-2 in front.

To their credit the Wee County hit back with a bang, two goals in the space of three minutes turning the game on its head.

Sean Marry took a quick free from the sideline towards Declan Byrne who was taken out as he went for the ball, resulting in the referee Barry Tiernan awarding a penalty. Michael Byrne guessed right but he couldn’t stop Mulroy’s attempt which blasted the back of the net.

Three minutes later it was the turn of Marry, who did well to get away from his marker and create some space to bury the ball home from close range, the two goals seeing Harte’s charges going into the break 2-5 to 1-6 ahead.

The Saffrons started the half the stronger, hitting four of the first five points in the opening 15 minutes leaving the sides deadlocked at 2-7 to 1-10 going into the water break and they looked to push on backed by a strong breeze.

They hit a further two points before once again being pushed back by Louth, as Mulroy repaid his manager’s faith in him as the new captain by bagging his second goal of the contest, soloing through the heart of the Antrim defence and hitting a rocket past Byrne to put them up by a point.

However heartbreak was on the cards once more for Louth, as deep into injury time Ryan Murray created space in the corner before putting it over the bar to jubilant scenes amongst the Antrim bench.

Next up for the Wee County is a trip West to face Leitrim, in what is now a make-or-break game in their fight for promotion.