Dundalk vs Harps Preview: Jim Magilton apologises for Covid breaches ahead of vital game in Donegal 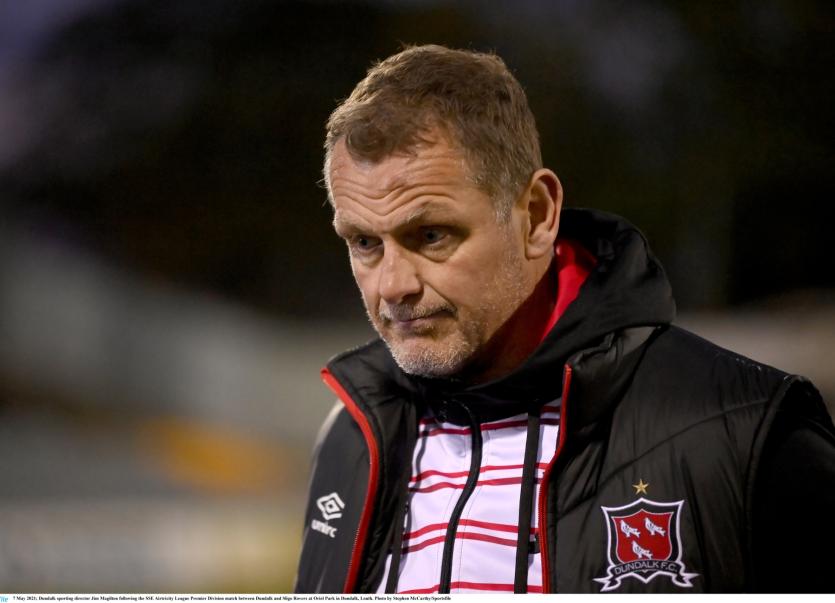 Dundalk FC could do with a positive outcome tonight when they travel to Ballybofey to take on Finn Harps in the SSE Airtricity League (kick-off, 5.45pm).

The week at Oriel Park was marred by photographs circulating which appeared to show several first-team players in Belfast, in spite of government restrictions not yet being lifted.

The photos in question emerged less than 48 hours after The Lilywhites’ dismal 1-0 defeat to ten-man Sligo Rovers at Oriel last Friday night – their fourth defeat in ten fixtures this year.

“On behalf of the management, the staff and of course the players, I want to apologise to the Dundalk FC fans, the FAI, the HSE and all frontline workers, the League of Ireland family and people everywhere for the actions of some of the Dundalk FC players, who broke government protocol last weekend when they travelled to Belfast.

“Gratefully, we announce that all Covid-19 tests have returned negative. The HSE has confirmed that the club has satisfied all the necessary protocols to resume training and playing games. The following actions have already been put into action.

“The players that participated will bear the cost of testing the club's personnel. The players will be making a donation to a local charitable cause, the Save our Sonia campaign, in due course.

“At best, this was a misguided attempt at a team bonding exercise which was not sanctioned by the club and the players involved wish to apologise for letting Dundalk FC, the fans and themselves down.”

Dundalk have missed two days of training as a result of the incident, but Magilton has challenged the players to show their resolve and create much-needed positive headlines.

“It is always about character; it’s always when you step over that white line,” he added.

“It’s an illustration of yourself, but it’s also an illustration of the team. I always felt that I had to take care of me first – in terms of my performance – and then help others. That’s the loveliest thing about football – you’ve got ten others who can get you out of it. If it’s an individual sport, it’s down to you and you alone.

“We trained yesterday (Wednesday) and we looked as if we were bang at it. We trained again today and there was an intensity in their play.

“Once you step over the white line, it’s all or nothing and they’ve got to leave everything out there.”

Currently seventh in the table after ten matches, Dundalk could find themselves 12 points off European qualification for next year should they suffer a second defeat to Harps this season.

Harps beat The Lilywhites at Oriel back in March, with top scorer Adam Foley capitalising on what was an awful mistake from goalkeeper Alessio Abibi to score the game’s only goal.

“There’s lots of pressure,” said Magilton when asked if the club are under pressure to qualify for Europe.

“The pressure on this club is to finish top every year and that’s just through experience. The experience of the last few years has been that they’ve been competitive, apart from last year of course.

“Did we expect Dundalk to be in a position like this? No. With the group of players? No, but we are and now we’ve got to go on a run of games where we’re winning games and we’ve got to show that we can get out of this.”

Sonni Nattestad and Sam Stanton are back in contention for the trip to Donegal, but Dundalk are still without Brian Gartland, Cameron Dummigan, Patrick Hoban and David McMillan.