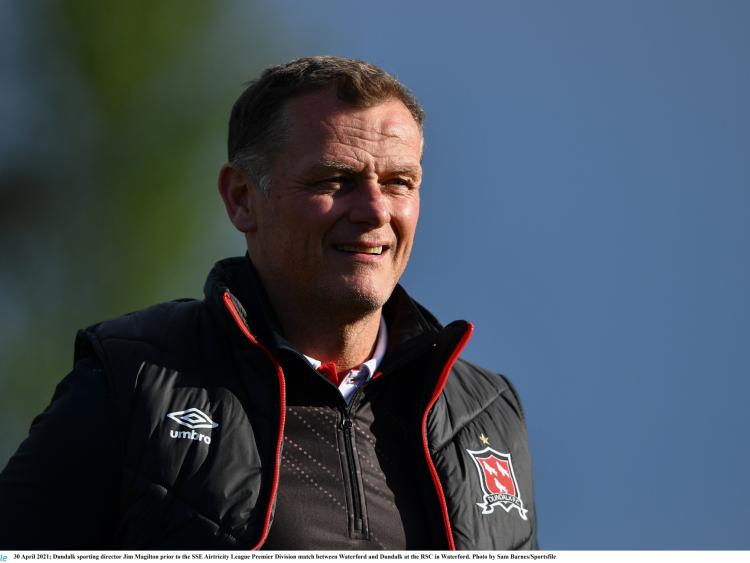 Dundalk sporting director Jim Magilton prior to the SSE Airtricity League Premier Division match against Waterford at the RSC. (Photo by Sam Barnes/Sportsfile)

Dundalk FC will be hoping to make it three SSE Airtricity League wins in a row when they travel to struggling Longford Town for a Bank Holiday Monday clash (kick-off, 5.45pm).

After recording their first win of the season against Drogheda United at Oriel Park just over a week ago, Dundalk thrashed Waterford by a scoreline of 3-0 at the RSC last Friday night.

“Coming away from home, getting three goals and getting a clean sheet is marvellous. There’s not much more you can ask of them.

“I thought it was a really good all-round performance. It’s building on last week. There’s loads that we can improve on, but what’s important for us and important for the group is the clean sheet.

“It’s an obvious cliché, but the more clean sheets this team get, the more games they’re going to win.

“There was more sustained pressure and more sustained quality which is exactly what we’re striving for. We know that we’ve a quality bunch of players, but it’s just building on their confidence.

“We’re building and this is an important result for us of course, but now we’ve got to go to Longford and go again.”

Dundalk were comfortable against Waterford for the most part, although some lacklustre play at times afforded The Blues ample opportunity to get themselves back into the contest.

However, they couldn’t capitalise, as The Lilywhites held out for what was a first clean sheet since last October, but Magilton was impressed with the depleted Munster side’s endeavour.

“Credit to the staff. Kevin (Sheedy) and Mike (Newell) are doing a great job here under difficult circumstances. His team didn’t let him down. They kept going and going.

“We are our own worst enemy when we’re sloppy and we give the ball away at needless times. It caused us a little bit of panic, but it’s building blocks for us and it’s stepping stones and at the minute, you can see confidence is coming back slowly but surely.”

Next up for Dundalk is a trip to Bishopsgate to face Longford, who haven’t recorded a win over The Lilywhites since 2008 and have never beaten them in a Premier Division fixture.

Dundalk will be without Cameron Dummigan and David McMillan, who both went off injured during the win over Waterford, with Magilton’s options looking increasingly reduced.

“We’ll obviously assess them in the morning. They’re probably doubtful now for Monday, but we’ll just have to get by.”

Darragh Leahy missed the game in Waterford, but is expected to be available for Longford. However, no update has been offered on the availability of Sam Stanton or Han Jeong-Woo.

Daniel Kelly could return to make what would be his first appearance of the season, but The Lilywhites are still without the injured Brian Gartland, Sonni Nattestad and Patrick Hoban.

“That’s part and parcel of the game. We’re not crying over spilt milk. We’ll get up and dust ourselves down and we’ll pick a team to go and play at Longford.

“They’re going to provide really stiff opposition and we’ve got to be ready for it. We will definitely be ready and we will be going there to win the game.”

Monday’s game between Longford Town and Dundalk is available to stream on WatchLOI.