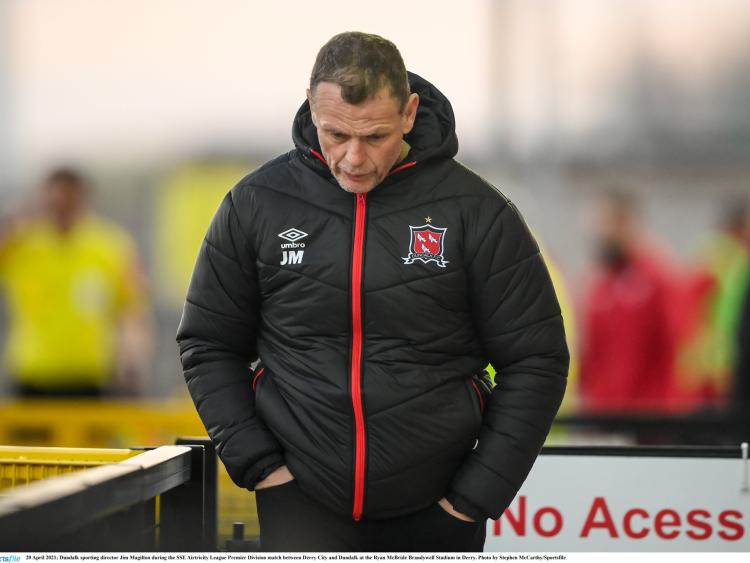 Jim Magilton is ‘extremely disappointed’ with the Faroese FA in relation to Sonni Nattestad’s unavailability since returning from international duty. (Photo: Stephen McCarthy/Sportsfile)

The Faroe Islands international defender – who joined Dundalk from B36 Torshavn back in January – has so far played just one match in the SSE Airtricity League for his new club.

His sole appearance came in the opening-night draw at Sligo Rovers before flying off to play in World Cup Qualification with the Faroes, where he started three games in just one week.

He thereafter spent a ten-day period in quarantine and has been nursing an injury to his pubis ever since, meaning he will again sit out Friday’s encounter in Waterford (kick-off, 7.45pm).

“We’re still monitoring his progress. We are extremely disappointed with the Faroe Islands in terms of how he came back and we’re going to deal with that.

“He’s played three games and then he went into quarantine for ten days and he’s still not right for us. Something has to be done and we’re not particularly happy with that and we’re going to deal with it.”

In more positive news for The Lilywhites, Daniel Kelly – who hasn’t yet featured this season – returned to training this week and could play some part against Waterford at the RSC.

Patrick Hoban could miss the next four matches with the ankle injury he sustained against Derry City last week, while Brian Gartland is due to undergo surgery on Friday morning.

Ole Erik Midtskogen sat out last week’s 2-1 win over Drogheda United at Oriel Park and was spotted wearing a nose cast, but the Norwegian striker is available for the Waterford match.

That win was Dundalk’s first of the season and Magilton is hoping that can prove the catalyst for a winning run, starting with the next two fixtures against Waterford and Longford Town.

“It was something to build on,” he added.

“We did put pressure on them to win the game and they did. We know that performance levels can be better and that was reiterated through the week. The response this week has been fantastic. The players have responded really well.

“We’re looking forward to the games. Both games are going to prove very difficult. You’re away from home. The opposition have lots of strengths and we’ve got to match that and come out with our own way of dealing with that.

“We have lots of good players and we know the competition. I’m striving for competition and we want that. We want people that start the game to know that there is real competition now sitting in the stands ready to play.”

Waterford are tied with Dundalk on six points heading into this game, with The Blues picking up their second victory of the season against Longford last week – winning 1-0 at the RSC.

“I know the two guys very well – (Kevin) Sheedy and (Mike) Newell – and I know they will set their team up to win the game. It will be a difficult game for us, but we’re focusing on us.

“We’re very much focused on the positives and building the confidence. One game means nothing to us. We have to go on a run. We gave enough teams a head start.”

Friday’s night’s game between Waterford and Dundalk is available to stream on WatchLOI.