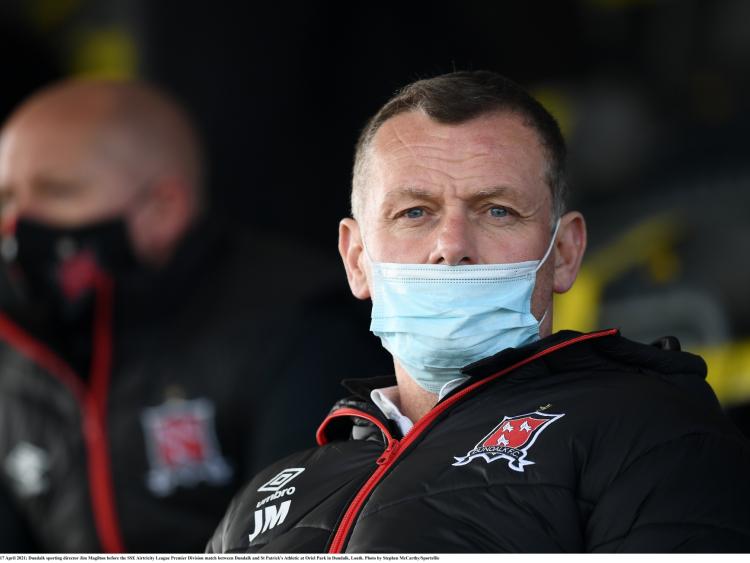 After much deliberation, the departures of team manager Shane Keegan and coach Filippo Giovagnoli were confirmed on Monday, as the search for a new boss begins at Oriel Park.

Giovagnoli’s right-hand man, Giuseppe Rossi, will remain at the club for the time being at least, and he will be joined by Jim Magilton and Stephen McDonnell in the dugout in Derry.

The Lilywhites rescued a vital 1-1 draw against St Patrick’s Athletic at Oriel on Saturday evening, thanks to Junior Ogedi-Uzokwe’s 85th-minute equaliser – his first goal for the club.

Derry and Dundalk are the only teams still awaiting their first wins this season, and defeat at the Brandywell on Tuesday night would see The Lilywhites slump to the bottom of the table.

However, Magilton believes that the hard-fought point against St Pats – which put a merciful end to Dundalk’s worst losing streak in nine years – could inspire confidence in the players.

“We showed courage and we showed character which this team has in abundance,” he said after the St Pats game. “Tonight was an important statement for them more than anything and I think they deserved it in the end. They pressed the game and they got their just rewards.”

“We’re off to a slow start but these are good players. These are really good players and confidence is massive in the game. That was a massive result for them tonight."

“No matter how good you are, when you’re going through that little spell, you start doubting yourself. Our job is to pick them up and give them the confidence because they are really good players.

“If you’re losing games of football, people are going to question. We’re not questioning anybody here."

“We know how hard people work. We know we’re going through a little slump if you like, but tonight was massive for us because these players showed the character that they have in abundance.”

In spite of the chaos that currently surrounds the club, Magilton believes that ‘togetherness’ will be crucial throughout this period if The Lilywhites are to get their season back on track.

Magilton is hoping that the late surge against St Pats can be the catalyst for a winning run, starting at the Brandywell – a ground in which Dundalk haven’t tasted defeat since 2012.

“It’s just a matter of sticking together and getting through this,” he added. “We know we’re capable of winning consecutive games. They’ve shown that in the past. Tonight was a statement. We go to Derry now on Tuesday night looking to build on tonight.

“We didn’t expect to lose three on the trot. I don’t think some of them lads have lost three games since they were in school. It’s what it is and that is the wonderful game that we’re all involved in. It’s so unpredictable."

“Tonight, I thought tenacity, aggression, quality and character were in abundance and as I say, I thought we deserved something from the game and now it’s something to build on.”

Brian Gartland and Daniel Kelly are the only definite absentees for Dundalk, while Faroe Islands international Sonni Nattestad is hoping to return after missing the last four matches.