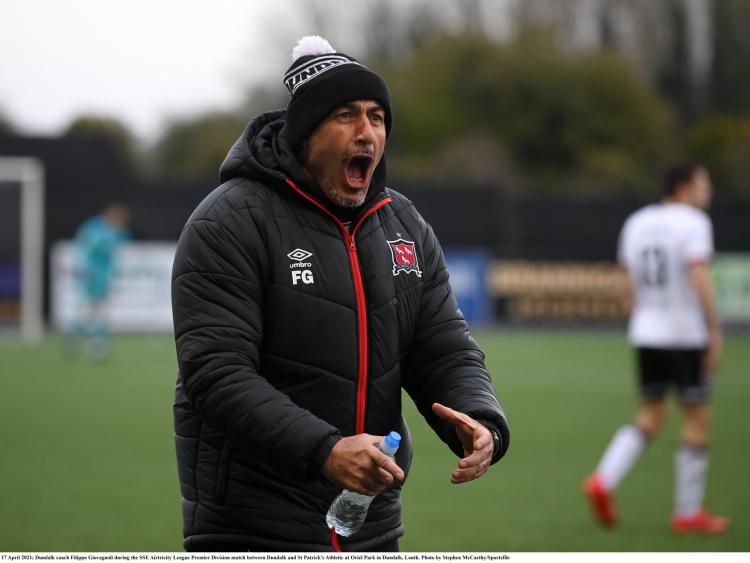 The Filippo Giovagnoli era looks to be over, after winless Dundalk played out a 1-1 draw with St Patrick’s Athletic at Oriel Park in the SSE Airtricity League on Saturday evening.

Banners reading ‘Ran Like a Circus’ and ‘Tempo di Andare (Time to Go)’ were unfurled by a small, but vocal band of Dundalk fans that congregated at the parameters of the ground.

In normal circumstances, a far greater protest would have likely echoed around the Carrick Road venue, but this has been anything but a normal past 12 months for The Lilywhites.

The latest episode of the Dundalk soap opera unfolded just hours before the kick-off against St Pats, with widespread reports speculating that team manager Shane Keegan had resigned.

As radio silence from the club continued throughout the day, word circulated around Oriel that Giovagnoli would be joining Keegan out the revolving door after the full-time whistle.

Jim Magilton – the sporting director who is now the only Pro License holder currently at the club – took his place in the stand, as Giovagnoli facilitated first-team affairs for the last time.

In the midst of the unorganised chaos that is now indicative of the club’s owners, Peak6, it was easy to forget that Dundalk were playing in what was a ‘must-win’ game against St Pats.

Alessio Abibi was reinstated to the starting line-up in what was the only change from the previous week’s defeat to Bohemians, and the Albanian goalkeeper endured a couple of nervy moments in the early stages, while ex-Dundalk man Robbie Benson fired over the top.

In what was a largely uneventful opening half, Dundalk’s only attempt on target came when Cameron Dummigan’s cross was headed by Patrick Hoban, but Vitezslav Jaros saved easily.

Dundalk were slightly improved, but it was still the side from Inchicore that were looking the far more likely, with Abibi having to save well from Ronan Coughlan shortly after the restart.

As if Dundalk’s week couldn’t get any worse, The Saints took the lead on 56 minutes when Benson’s corner from the right was headed home by defender Sam Bone who made it 1-0.

The Lilywhites came close to grabbing a much-needed equaliser when from Michael Duffy’s corner, the ball broke luckily for Chris Shields but the Dundalk skipper diverted wide.

Abibi produced a remarkable save to deny St Pats substitute Billy King’s volley before at the other end, another substitute, Junior Ogedi-Uzokwe, was denied by Jaros from close range.

Dundalk equalised five minutes from time when Junior somehow bundled the ball through the legs of the St Pats ‘keeper, as the small army of Dundalk support descended into ecstasy.

Duffy fired a shot straight at Jaros before the hosts almost won it in the dying embers when the ball was cleared off the line twice in quick succession from Junior and David McMillan.