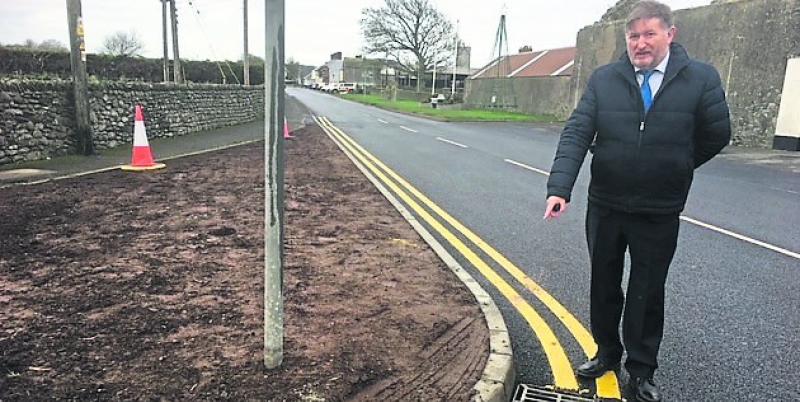 Sinn Féin councillor Pearse McGeough has referred to the new junction layout in Annagassan as ‘an embarrassment’ and is demanding for it to be rectified immediately.

The Farm Road Junction in Annagassan was ‘upgraded’ recently but according to Cllr McGeough, “ they narrowed the entry/exit so much that there is barely a full car breadth between both lanes.

“I don’t know who measured the mouth of the junction but they must have thought everyone using that junction was going to be driving Minis,” the councillor said.

“When you turn into the road, you have to ensure there is no car waiting to exit because you need to take up both lanes when you turn in. There are wheel marks on the footpath at either side as cars have had to mount the pavement either to enter the junction or to leave it to avoid other vehicles.”

Cllr McGeough also hit out at what he labelled a lack of foresight. “What if there is an emergency and a fire engine or ambulance needs to get down that road in a hurry? They will have to stop and manoeuvre their way round that junction which will cost precious time.

“There is a bus service along Farm Road several times a day and it is a joke watching the poor driver waiting until the junction is clear of traffic before attempting an extremely challenging manoeuvre just to enter the road.

“I honestly believe that every time the bus driver manages to get in or out of Farm Road safely they should get a round of applause. The whole thing is an embarrassment for all those involved in that junction upgrade.”

Cllr McGeough said, “no-one is happy with this junction.”

Following the Ardee Municipal Meeting, Cllr McGeough was informed that a review of the junction would be undertaken immediately. At the meeting Cllr McGeough referred to a friend’s description of the realignment of the junction as the “biggest controversy in Annagassan since the Viking invasion of 841AD.”