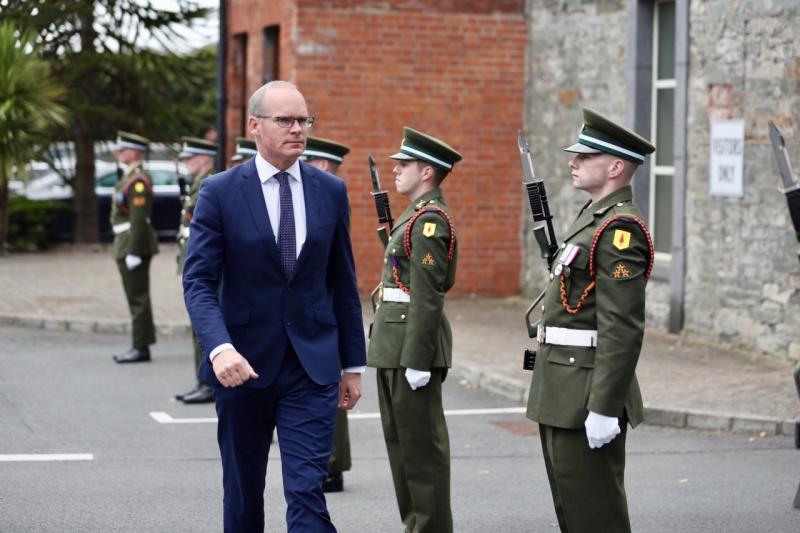 The Minister for Defence and Minister for Foreign Affairs, Mr. Simon Coveney TD met with a number of members of the Defence Forces in Aiken Barracks Dundalk who are part of the 62nd Infantry Group who will leave in the coming weeks for service with the United Nations Disengagement Observer Force (UNDOF) on the Golan Heights. Due to Covid-19 restrictions, the event was a limited version of the usual Ministerial Review of departing contingents.

Speaking during the Review, Minister Coveney said, “In these challenging times, it is more essential than ever that we continue to work with the United Nations and the European Union to make peacekeeping operations as efficient and effective as possible.  The presence of the UNDOF mission remains an important element in ensuring the continuing ceasefire between Israel and Syria and is supported and welcomed by both countries”.

UN Peacekeeping rotations have resumed following an initial suspension announced in April   by the Secretary-General of the United Nations in response to the COVID19 pandemic. The Minister welcomed the resumption of UN rotations despite ongoing challenges such as border closures and quarantine arrangements in host countries. In acknowledging the UN's priority at this time to safeguard local populations and peacekeepers, Minister Coveney stressed the continued need for vigilance and strict adherence to quarantine requirements. The Minister assured personnel that he "recognised and appreciated, the impact quarantine restrictions is having on members of the Defence Forces and their families "and that "the Government and the public deeply appreciate the additional personal sacrifices that have to be made by deploying troops at this time.”

In his concluding remarks, the Minister asked that his congratulation be passed on to the entire 130 personnel of the 62nd Infantry Group on their training and achievements to date and wished them a safe and successful mission.