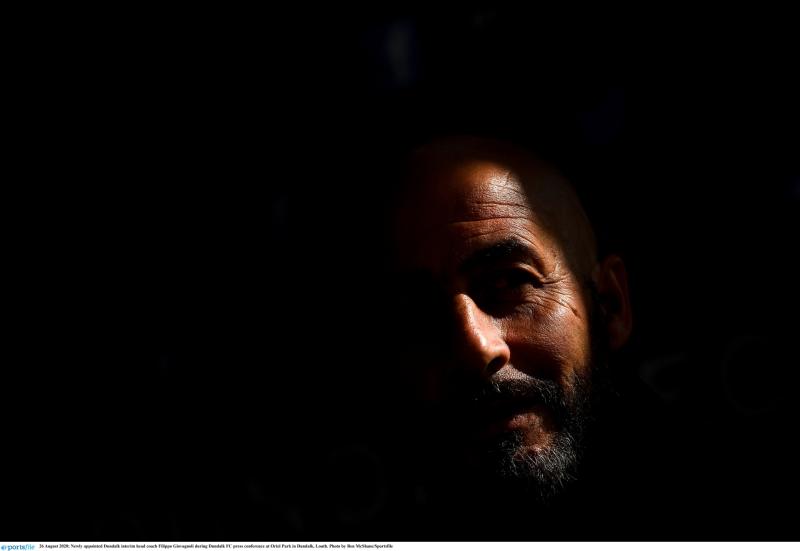 Another erratic week at Oriel Park began last Monday morning when word had filtered through that – less four days following the dismissal of Vinny Perth – Dundalk FC had found its new head coach. White smoke may have been coming from the Carrick Road, but with frontrunner Mark Burton unable to take up the position due to Covid-19 restrictions, and other UK-based candidates such as ex-Irish internationals Robbie Keane and Mark Kennedy turning down approaches, supporters and journalists alike were left scratching their heads.

That collective scratching only intensified once reporters got wind of a potential Italian link.

If nothing else, this was sure to be an intriguing appointment. Suddenly, we had a name – Filippo Giovagnoli, which had every one of us doing our finest John Sheridan impression.

Who indeed? Quick internet searches offered scarceinformation, asides from the fact that Giovagnoli had been working in the United States for the past number of years. It was well over 24 hours before the club had actually confirmed the news of his appointment via a club statement, which omitted the fact that John Gill had vacated his role as first-team coach on the same day. Giovagnoli – alongside his assistant Giuseppe Rossi – facilitated their first training session that very morning and a source close to the club revealed to The Democrat that Giovagnoli’s inaugural session was, in fact, a resounding success amongst the players.

He met members of the local and national media the following day, demonstrating a seemingly unbounded confidence and charisma, which, given his lack of experience, left many of those in attendance somewhat incredulous. The 49-year-oldproudly disclosed that he hails from Apecchio – a tiny Italian commune with a population of less than 2,000 people – and grew up supporting Juventus. Ten years his junior and from the same village, Rossi, on the other hand, was of an AC Milan persuasion. However, Giovagnoli and Rossi certainly seem to agree on one thing – a philosophy that encourages attractive, but effective football, all whilst overseeing the development of footballers, not only as players, but also as people.

Both men have worked together at the Metropolitan Academy in New York prior to their arrival at Dundalk, where they will stay until at least the end of the current season. In fact, Giovagnoli was back home in Apecchio, where his wife and son remain, awaiting his Visa to return to work in New York when he got the surprise phone call – one day before Dundalk’s 3-1 defeat at Sligo Rovers. On the other end was the voice of Dundalk chairman Bill Hulsizer, with whom he spoke with for several hours before accepting the job. For the League of Ireland champions, it’s most definitely a left field appointment that has to be seen as a monumental risk, but it’s every bit as much a risk for Giovagnoli, who is unsure if his old job in New York still awaits him when his contract at Oriel expires in just three months’ time.

As a player, the highest level he played at was Serie C in his native Italy, which would be the equivalent of League One in England. He featured most prominently with Florence-based outfit Rondinella, where he partnered a young Andrea Barzagli in defence, jokingly claiming that the future World Cup winner and Juventus stalwart owes all of his successes to him.

But, when it came to his own way of defending, Giovagnolidescribed himself as animal-like.

He hung up his boots in 2001 and had coached in the lower echelons of Italian football before becoming the director of AC Milan’s summer camps – a job that ultimately took him to the United States, where he had been since 2014. In terms of coaching, his biggest inspiration appears to be Maurizio Sarri– a man he describes as a genius. It’s easy to see why, for Sarri, like Giovagnoli, never played at football’s highest levels and didn’t manage in the top-flight until the age of 55. Giovagnoli, who turns 50 at the end of this year, will be dreaming that his spell at Dundalk could, in the future, unlock some previously closed doors.

In addition to potential runs in Europe and the FAI Cup, the Italian has nine SSE Airtricity League matches to show what he is capable of, and, for all we know, Dundalk supporters could be calling for him to remain here for the long-term, should all go according to plan.

A seemingly likeable character off the field, an improvement of form in the coming weeks would go a long way towardsendearing himself to the Oriel faithful. He certainly comes across as a motivator – perhaps something his predecessor was lacking – and describes his new group of players as his sons. Recent form suggests that the Dundalk team certainly needed a fresh impetus, but whether or not Giovagnoli is the man to impose such remains to be seen. However, they say that you only get to make one first impression and Giovagnolipassed his first assignment with flying colours. It’s an arrangement so crazy, it might work.