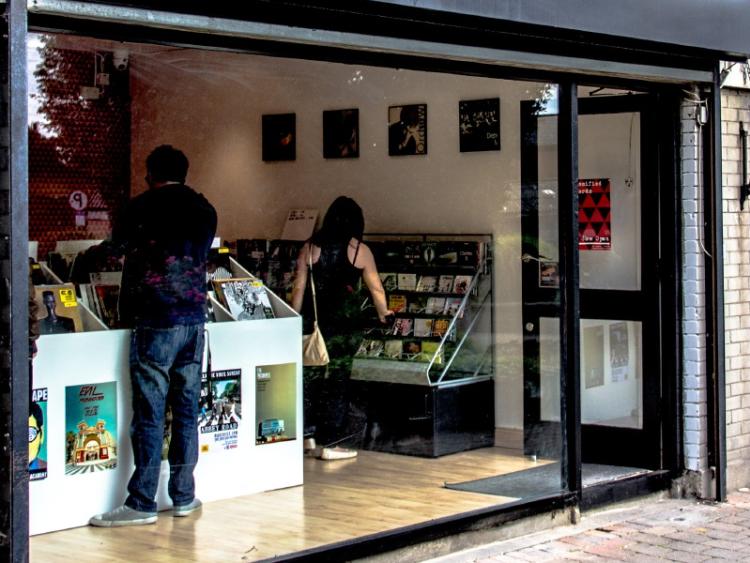 A long time had passed since Dundalk had a fully-fledged - traditional - record shop on its streets, but when Classified Records opened its doors back in August 14, 2015, music-lovers rejoiced.

At a time when the idea of buying a physical record seemed to be a thing of the past, owner Neil Waters thought otherwise, a brave move at an already difficult times for high street shopping.

But five years on, this ever-popular shop, situated in the Demesne in the centre of town has, Neil feels, helped “accelerate the re-emergence of vinyl as a popular music format that was once considered defunct”.

He adds: “Once again, vinyl is universally en-vogue and has also developed into a concrete interest for younger music lovers who grew up in the digital age. It’s truly a small wonder that this analogue technology can thrive in a wireless world of Spotify, music apps, free downloads and cloud sharing.”

Neil, who takes up station in the shop every day, comes across as a record addict, he lives, breathes and eats music. For him, still being in business five years down the road is more about having a thick neck and holding firm.

“The key to success is survival,” he explains further. “It’s one thing opening a shop to great initial excitement but it’s another thing keeping it going through the leaner months of a year. There’s lots of slog involved but it’s all part of the job; nothing is truly earned without graft and long hours”.

Tradition is a big part of it, says Neil. Both in terms of hard work and also the fundamental old-school idea of what a record shop is to its customers.

“What seemed like a good idea in the summer of 2015 has rung true. A good idea can grow to define you or destroy you so you have to back your words with actions. We have been here every single day like clockwork; we never open late and never close early. A record shop must have an old-fashioned vibe to it; after all we are selling a product that dates back over 100 years”.

While owning a shop for a long period of time is usually about evolution and change, unsurprisingly, Neil takes another approach entirely.

“The last five years have flown by. We might all be suffering from time dilation and maybe people can’t believe it’s been five years already but it is; we’ve been doing this for over 1,800 days. The shop hasn’t changed much in that time because it doesn’t need to; we sell records and we talk about music. There’s no need to change the key if the song is in tune”.

A lot has changed in the world of music in the last six months, however, according to Neil, Classified Records are ready to face this new landscape of flux by being equipped for the challenges ahead.

“Obviously there is room for evolution and we’re always adapting our approach. We’ve got major plans for an e-commerce website which is being launched on September 1. We’ve already got an online marketplace shop on Discogs for second-hand records plus we’ve recently added a card-payment machine. We can do deliveries or arrange collection points. Whatever happens down the road, we will be able to always offer a service”.

These are strange times across the world and Neil sees music as a balm to soothe and help.

“Music is a way of life. It connects and resonates deep within us. Its importance for mental health well-being cannot be underestimated. Music is a brilliant hobby and a great thing to have in common; many relationships are formed through a shared love of a certain type of music”.

Neil believes that many connections have been made through his shop’s mere existence over the past five years. It has created a place for like-minded souls to find records in the north-east.

“We’ve seen a lot of traffic and made plenty of new friends. It has been a life-changing experience to be involved in Dundalk’s only record shop and we really hope that it’s been fun for everyone else too. We put our backs into this job and it’s been fantastic to connect with so many music lovers.

“Honestly, we’ve learned so much from our customers about various types of music and this interaction has helped improve the shop's range and selection. We strive to keep the vinyl bays fresh and full of interesting titles. There’s a particular delight in buying a record and we really enjoy being able to provide this platform”.

Being a part of the community is the USP for Classified records, Neil adds.

“A record shop is a community hub that lives in harmony with its customer base and we have to graciously thank all our clientele and well-wishers. It’s been a long enjoyable journey so far and all we want to do is keep it moving forwards. We’re all in this together”.

To celebrate their fifth anniversary, Classified Records will be celebrating in style this weekend and they are giving away a free Led Zeppelin LP to one lucky read of the Dundalk Democrat.

To be in with a chance of winning the LP, email us at editor@dundalkdemocrat.ie with your name and phone number, and include ‘LP prize’ in the title bar, and we will pick the winner at random.

Closing date for entries is Friday August 14 at 3pm.