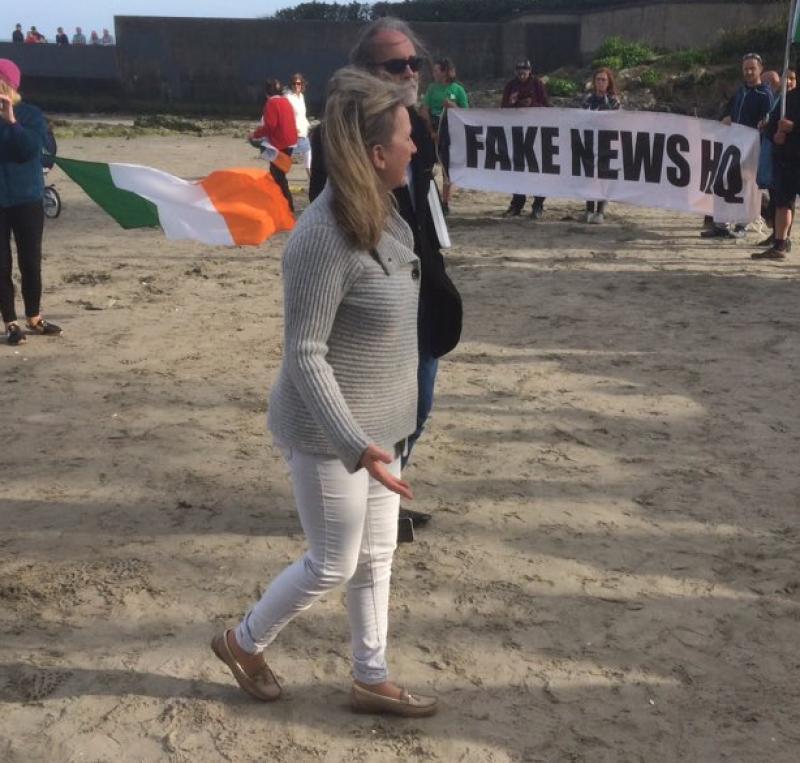 As a resident of Blackrock I went down to see the protest last Tuesday night as a matter of curiosity and I knew the stand this group were taking on the government controls on the lockdown. Even from a news point of view, being a news reporter, I wanted to check it out.

When I went down, I saw Gemma O’Doherty and John Waters - I walked up to Mr Watters, even before the meeting started, and asked him why he was here? And was he aware of the fact that he’d broken the 5.5km zone?

I then got a barrage of verbal abuse, which is there to be seen on social media. I was shocked at what was said, but I kept my composure; there was no point in losing the head. I then turned and Gemma O’Doherty was there and she told me that I was on their livestream and asked if I’d anything to say. I said that I was after being verbally abused by Mr Waters.

I walked away, speaking to several people that were part of their group and asking them why they were there. I found some of them to be very aggressive. ‘What about the virus,’ I asked. They said, ‘what virus? There’s plenty of viruses going around’.

They’re entrained to fight a case and they’re perfectly entitled to do that, but the lockdown has saved an awful lot of lives and prevented things from being far worse than they could have been, except for what has happened in nursing homes, which has been absolutely appalling.

And I can’t understand why these people were not detained by the Gardaí - they were outside the 5km zone. Why Gemma O’Doherty, John Waters and their supporters were not arrested on Tuesday for breaking that, I don’t know. There’s been quite a number of prosecutions under that ruling.

Overall, the Gardaí did what they had to do. I can possibly see the reason why they didn’t arrest Gemma O’Doherty and John Waters because it may have played right into their hands.

But it seems a bit hypocritical that I can’t get into my car and drive more than 5.5km and yet they can travel all around the country. Is there one law for one and one law for the other? I’d call on the government to decide whether they’re going to make that decision to approach the police authorities to see whether they are going to decide to arrest them, because they keep moving around.

It was very annoying to see that they were able to travel from whatever part of the country they came from so easily. I’d be worried about the fact that they had people in Blackrock who’d have known the lay-out of the place because, originally, as far as I understand, the protest was supposed to be held on the main beach, which was closed off.

As a result, they decided to have it on the priest’s beach. To me, the whole beach ought to have been closed off, as it was a few weeks ago; closed off entirely. Had that happened, it would have worked and they wouldn’t have been able to hold their meeting on the beach.

To me, the planning that went into to try and prevent the meeting from going ahead was all wrong. It was pointless closing off one part of the beach without closing the entire area. It should have been sealed off properly. Either that or don’t do anything at all.

I think it’s a complete failure on the part of whoever was responsible. The Gardaí may have advised Louth County Council only to do that part, I don’t know, but the Gardaí should have advised to close off the whole beach. At that, the Council itself should have known that another part of the beach was going to be used, possibly even the village’s best part of beach.

There have been claims on social media that there were actually stones thrown, but I certainly did not see that. I would rule that out completely.

A local woman went up to the group and told them that they weren’t representative of her and the local people. She was turned away and verbally abused by a woman who told her that she was uneducated. When I went over to the woman to tell her to leave the local resident alone, she verbally abused me too, after asking what my profession was.

The abuse was coming from them, but I want to make it clear that there shouldn’t have been any objects thrown by the spectators. Had the crowd been larger, there could have been a serious risk to people had a skirmish broken out. Thankfully that didn’t happen.