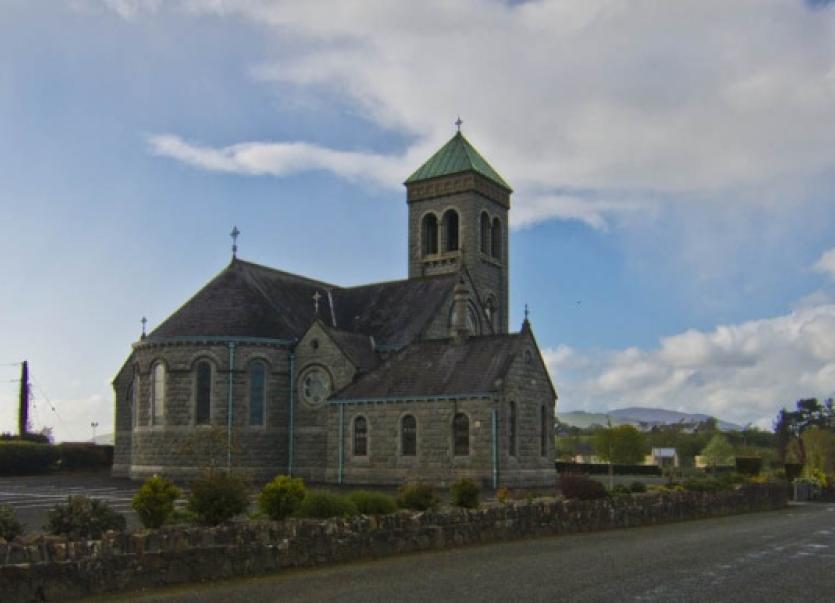 Kilcurry Church, which is within the remit of the Faughart Parish.

Parish Priest Fr Michael Murtagh is saying mass for people via social media, ensuring he keeps in touch with his parishioners, but he admits the future is very much unknown.

“We have quite a digital outreach and people are still logging in every morning and weekend, keeping in contact with us on Facebook,” Fr Murtagh told The Democrat.

“It’s new ground and we still don’t know quite what the reaction will be from people.

“The diocese is not quite as strict as other dioceses, some parishes in the north of the parish have had to close the church building completely and some of them have no funeral liturgy at all, apart from a committal at the graveside.

“We’ve just had one funeral since the lockdown and people adapted to it generally, but it will be a test alright. We had two quite big funerals just before the lockdown which went off in the normal fashion.

“It’s unprecedented. There’s nothing that people can remember or compare it with. It’s new ground and how it will impact on the short-, medium- or long-term remains to be seen.”

Fr Murtagh says his thoughts are with the less fortunate.

“There’s a lot of people, people in my own family, who’ve had their income cut to zero.

“There’s an awful lot of people out there with families and children and colossal anxiety over what’s going to happen. My focus will be on how people are coping out there.”

The Parish Priest of the Peninsula Pastoral Area has said Covid-19 has altered the public’s perception of life and believes his parishioners are grateful for the religious services which he and his colleagues are providing via digital platforms.

“It’s changed the way we think about life, about living, and there’s no doubt it’s difficult, especially for those who are vulnerable,” Fr Conlon told The Democrat.

“We’re trying to reach out through our Pastoral Council. We have mass daily on the webcam and I do say the rosary every evening at 9 o’clock from the churches.

“We’re currently thinking about holy week and the way we’re going to celebrate holy week this year - I will do the ceremonies from the church in Grange and it will go out on the webcam.

“It’s very difficult to be celebrating mass on one’s own, but I’m very heartened that many people have contacted me to tell me that I wasn’t on my own, that they are tuning in. It does mean a lot to people.

“Indeed, I’m really heartened by the reaction of people to the mass on webcam and the rosary every night. People do appreciate it.”

There are those, he admits, that are unable to avail of the ceremonies due to their lack of technological facilities. However, Fr

Conlon says the Pastoral Council have been really helpful in this sense.

“It was one of the topics we discussed with the Pastoral Council,” he added.

“They’re reaching out to the older people who may not have the technology and we’re learning that the mass can be recorded now and downloaded for people who are not into technology.

“It’s challenging, even for myself. I wouldn’t be very well into technology, but I’m having to learn and learn fast.

“I would like to think that our effort to reach out has been well received, to reach out to the isolated who may have other difficulties like food.

“We would have quite a number of older people who live in very isolated areas and people have really been very good in terms of reaching out.”

There is also the issue of parish upkeep finance, but while Fr Conlon acknowledges this, he’s adamant that there are more pressing matters.

“Our parish and the neighbouring parish for whom I’m also responsible, the income has just dried up. I did write out to parishioners offering them the facility of supporting the parish online.

“But while it’s going to be an issue that we’re going to have to deal with down the road, our priority is the people at the moment and supporting them in whatever way we can.”

Fr Vinod Kurian - Kilcurry PP
Several weddings and baptism ceremonies have been postponed in the Faughart Parish as a result of the coronavirus pandemic.

Fr Vinod Kurian, the Parish Priest, has also been busy presiding over funeral masses and burials with a greatly reduced congregation as a result of the catholic church having to close its doors to mass gatherings.

“I’ve done three funerals in the last two weeks, but only the immediate family were present for them, only about eight or 10 people at the funeral masses.

“Wakes aren’t able to happen at the moment either and they’re big things for Irish people, so it’s a very difficult situation.”

However, mass continues to be said via Facebook and the numbers watching are high. Nonetheless, the priests’ inability to carry out their habitual duties is hard to adjust to.

“We’ve got a very good response online,” he added.

“I would normally go to visit people in the hospital and nursing homes, but I can’t do it and we don’t really have contact with anybody at the moment, apart from some sick people on the phone.”

The Faughart Parish has been active in its fundraising in recent years, with each of the four churches benefiting. Yet, Fr Vinod admits, Covid-19 will dent their efforts considerably.

“I was talking to our parish accountant the other day and it’s very difficult. We have some money in the account, but we still have to pay the parish insurance, the electricity bills, etc. The finance is going down and this will have a big impact on the parish.”

Fr McEnroe was touched by the gesture and says the ceremony was appreciated generally despite there being a limited congregation.

“I had a funeral burial on Thursday and there were maybe a dozen or so people there and they were hanging around the graveyard,” Fr McEnroe told The Democrat. “But there was a serious airing of intention and prayer.

“It never happened before to me in 48 years of priesthood, when I was finished the service, I was applauded; at a graveside, I never experienced that before.

“The person loved hymns and her favourite hymn was the Bells of the Angelus, so we tried to sing a verse or two of it as best we could. It was so appreciated. I do feel very strongly emotionally for people at the moment.”

Fr McEnroe added: “It’s a strange, different, demanding and uncertain time. There is so much uncertainty now for everybody. We’re thanking God that we’re alive today and our health is good and we’re breathing okay.

“I find it difficult not being in touch with the people of the parish because I think they deserve service. That’s not possible, so I have got webcam in and I put out evening mass on a Monday and morning mass every day bar Saturday. I would do an hour of prayer on a Tuesday evening too.

“As well as that I would spend an hour or two most days calling people by phone and having a wee chat with them, especially people who live on their own and people who would be on my housebound list, those who receive First Friday calls.

“They appreciate that a lot and it’s actually good for oneself to do it as well.”