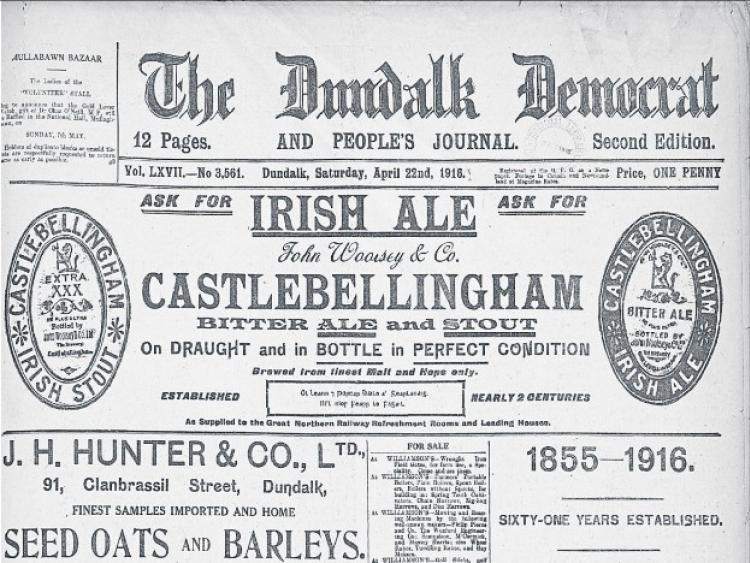 170 years ago, on Saturday October 20, 1849, the first edition of the Dundalk Democrat appeared on the streets of the Town.

In my opinion, however, it is more likely that it was printed in what was then known as 'Carton's Hotel' at 94, Clanbrassil Street, where Leavy's Chemist shop is today.  The evidence of older people, both printers and members of the Roe family who owned the newspaper, believed that the first edition was printed beside the Dundalk G.P.O., which, of course, did not exist in 1849!  They also believed that it was printed on a press known as a 'Wharfedale' which still was being used to print posters in the cellars of the Democrat at 3, Earl Street in the 1950s.

The reason for the confusion is that Joseph Cartan from Tullyallen in South Louth came to Dundalk sometime in the 1830s or '40s and set up at horse hackney business at 8, Clanbrassil Street and did some small printing of hand-bills and posters on the side.  Across the street was a coaching inn run by a man named McGovern who died at a relatively young age and Cartan stepped in to marry the widow and take over that business. We don't know much about his family life but, although he had no children by this union, it seemed to work out well and soon Cartan's name was over the door.

Cartan was a nationalist and great supporter of 'The Liberator' Daniel O'Connell and at least two lavish banquets were held in the hotel in the early 1940s when O'Connell was in Dundalk to speak at his famous 'Mass Rallies' in favour of the Repeal of the Act of Union.  O'Connell was also present in Carton's Hotel to support the candidacy of his son Daniel, jnr.,at a parliamentary by-election in North Louth in 1846. Just one year later, in May 1847, O'Connell died suddenly during the height of the Great Famine and, although there is no record of it, I suspect that Cartan decided to start the Dundalk Democrat in memory of his great hero and so began a tradition that has lasted to the present day!

There were many stories about the Democrat that might surprise readers of 2019 but the one belief that has grown up about the old newspaper is that it clung to the idea of printing advertisements on the front page longer than any other Irish provincial newspaper.  Well, that ended a few years ago when the paper became a tabloid but I note that there are still a few ads on the front page in 2019! It might surprise readers that there was not a single advertisement on the front page of the first edition in October 1849 and not many on other pages.  In truth there was very little local news either, as much of the news was copied from reports in 'English Newspapers' and rest was made up of letters about the current state of Irish politics.

The other thing about the first edition that might surprise present day readers was the cost of the paper.  It is blazoned on the masthead that it cost 'four pence and halfpenny' --- which, when you think about it, was a pretty substantial sum in 1849!  You see, according to the UK. Office of National Statistics, £100 in 1849 was worth around £12,500 compared to 2019 prices – and probably more coming up to the end of the year.  For those of us who have forgotten, the were 240 pence in the pound up until 1971 but, even so, 4 and half pence, would have bought a lot of things back in 1849 – the cost of a loaf of bread, if you could get it because of the Famine, was probably about a halfpenny!

Cartan must have taken a lot of financial risks when he started up his newspaper, as was proved within a decade when he had to go to jail because of a libel action taken against him by a local landlord for something he wrote during a by-election campaign.

So, how did he do it?  The answer was that he actually sold  very few papers, although I suppose some to the local lawyers could afford to but one!  From figures I have seen a few years in the paper a few years, later it seems that about 500 weekly was the highest number sold in the first decade of the existence of the Democrat. In the early days most of the papers sold were bought by newsagents who got boys to go around and rent a copy to people who paid about a penny an hour to read them.  Even then, there would be more listeners than actual readers because it is known that local teachers would read out what was written, to large groups of people in 'reading rooms' and there would be a discussion about it afterwards. I suppose the teachers themselves got a few pence for their work of reading and their may even have been a few different newspapers and hand-bills read aloud by them.