Fascinating stories and events from Dundalk’s past

The banning of the ‘Velocipede’ locally and other intriguing tales 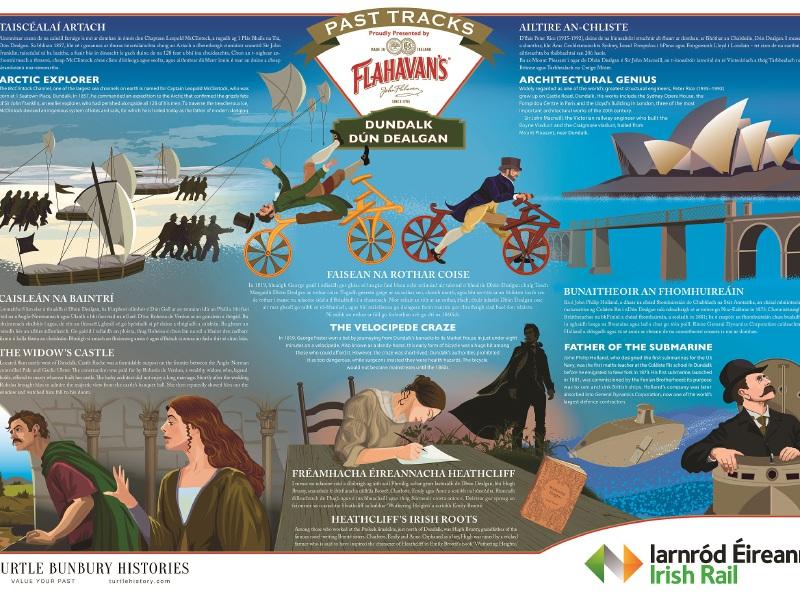 Fascinating stories and events from Dundalk’s past

Iarnród Éireann, together with Turtle Bunbury Histories and Flahavan’s, have installed a beautifully illustrated panel at Dundalk’s Clarke Station called, ‘Past Tracks’.

Researched by Historian Turtle Bunbury and illustrated by renowned Artist, Derry Dillon, it tells fascinating stories about historical events that occurred in the vicinity of Dundalk.

As commuters wait for their train, they can learn all about George Foster, who in 1819 won a bet by journeying from Dundalk’s barracks to Market House in just under eight minutes on a velocipede (the precursor to the bicycle), however, municipal authorities and town surgeons banned them from use, because of the danger. The bicycle would not become mainstream until the 1860s.

They can also learn about John Philip Holland, who designed the first submarines for the US Navy and was a maths teacher at Coláiste Rís School, Dundalk before he emigrated to New York in 1873. There are just sample of the fascinating tales.

Historian Turtle Bunbury first approached Iarnród Éireann over a year ago with the idea of creating historic panels at stations around the country that could be enjoyed by members of the travelling public as they waited for their trains.

Flahavan’s, agreed to come on board as sponsors and ten stations around the country now have Past Track panels, which feature quirky and accessible information about the areas surrounding the stations.

Speaking at the Launch, Historian Turtle Bunbury said: "In Ireland, we are surrounded by the past wherever we stand.

“Past Tracks is about taking some of the stories from our rich history and presenting them to commuters as something that will hopefully intrigue, amuse and maybe even inspire them as they proceed onwards with their journey".

John Flahavan said: "We are delighted to be involved in bringing local history to life through the Past Tracks project with Iarnród Éireann as the rail network was integral to the brand’s expansion and success during the mid-20th Century. Flahavan’s has had a trusted place at Ireland’s breakfast tables for generations and our own history is interwoven with the history of our local area in Kilmacthomas, Co. Waterford where we’ve been milling oats for over 230 years.

“We are pleased to be associated with this initiative, as it presents local history in an engaging and meaningful way to passengers young and old across the country".

Iarnród Éireann District Manager for the Dundalk area, Tom Ayres said: "The station here in Dundalk is very much part of the local community and I am delighted that my customers have such interesting information to read, while they wait for their train.

“Too many of us now have our heads constantly stuck in phones or other devices and it is important to appreciate the world around us.

“We cannot move into the future if we do not appreciate that past and these little nuggets that Turtle Bunbury has created are living history".

Turtle Bunbury is an expert researcher, historian and storyteller.

He researches the history of families, businesses, organisations and houses, capturing the legacy of the past, preserving the future for generations to come.

His books include the award-winning 'Vanishing Ireland' series, '1847' and, coming in 2020, 'Ireland's Forgotten Past.'

Derry Dillon is an Irish illustrator with over 20 years’ experience in children’s book illustration, educational publishing and tutoring in illustration and design.