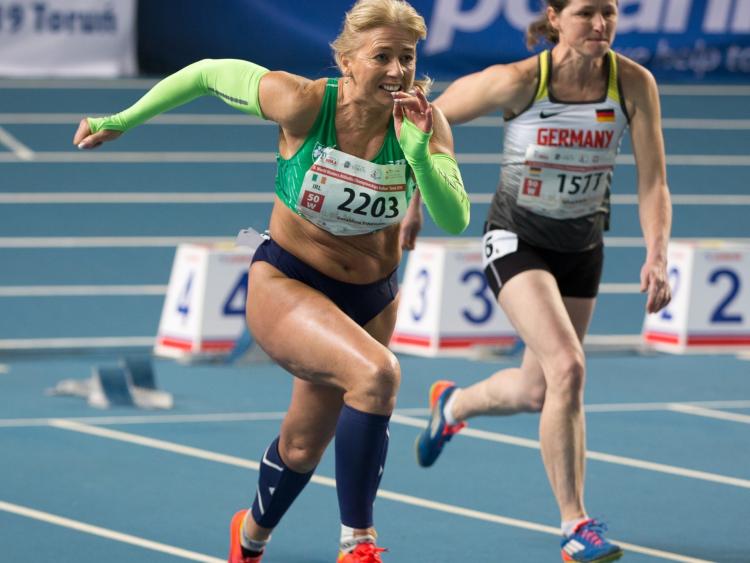 Fifty-four-year-old Geraldine Finegan from Church Street in Dundalk, who runs with the North East Runners Dundalk Athletic Club, surpassed all expectations and defeated all other athletes ranging in ages from 16 to 55 years who travelled from all corners of the globe from Japan, Australia, USA and Europe to compete in the Ultra Multi Event World Championships.

The double heptathlon event which caters for all ages from under 17 Under 23 Senior and Masters is known as a Tetra (four) Decathlon (ten)14 events takes place over two days. This event tests all aspects of fitness including strength, endurance, speed, technique and flexibility. The fittest women in the World had entered and only the fittest women would be able to finish all 14 events. The events included 100m 200m 400m 800m 1,500m 3,000m high jump long jump shot putt discus javelin 100m hurdles 200m hurdles and 400m hurdles with each event running 30 to 40mins after the last one finished.

Starting at 9am and ending at 5pm each day for two days which is longer than it takes for most marathon events and competitors need a well above average stamina just to complete each day's events.

This was not Geraldine's target as she had set her sights on breaking the World Record and nothing less would have satisfied her. Completing the first day, well ahead of her target, with maximum points in the high jump event she also won the shot and javelin and second place in the discus events with an exciting close finish in the hurdles event after winning the 1500m.

Geraldine began the second day bright and early as she was unable to sleep the night before with anticipation and nerves, she started the event with a super score of 946pts for the 100m hurdles which helped settle her nerves.

The faster you run the more points you get, the further you throw the bigger the points the longer you jump also gives you more points; this is all in relation to the World record in that event. The person with the highest points wins.

In 2017, Geraldine held the World Record for this event in Turnhout in Belgium with 10,250 points. With dedication, hard work and commitment in training Geraldine stormed through each event like a whirlwind recovering quicker than any one else and smashing the World record again.

The commentator who was encouraging the crowds to cheer Geraldine on as the last event was the 3000m with over 7 and a half laps to run and the Finnish people stood clapping and cheered her loudly on the home straight as they were excited to watch knowing the World record was about to be broken.

The new World record now stands to the Dundalk woman at 10,380pts. The closest rival came from her dear friend and fellow athlete Linda Holmstrom from Sweden with 9,481pts and Netherlands Jill de Gier with 6,845 and the under 23 winner Caprice Milroro with 5547 points. Geraldine said it was lovely to be a role model to the younger athletes who were amazed and encouraged by the results of a woman twice their age.

They showed great respect towards her and told her so. Geraldine would like to thank all those who supported her and cheered her on especially the other competitors and the friendly Finnish people who helped her celebrate the following evening and not forgetting her local gym Felda on the Dublin rd in Dundalk for the use of facilities.

Although Geraldine has a busy training schedule she finds time to help others by coaching and giving advice on nutrition, supplementation and breathing techniques to reach maximum goals and helps people believe to achieve.

Remarkably, Geraldine who is an asthmatic athlete, suffered a bad attack in January this year which left her in hospital and she says she is lucky to be alive thanks to the quick response of a medical nurse.

What is the future for this Superwoman? In her own words: ‘’I want to break more World records because I know I can do more. If you don't believe you won’t achieve."