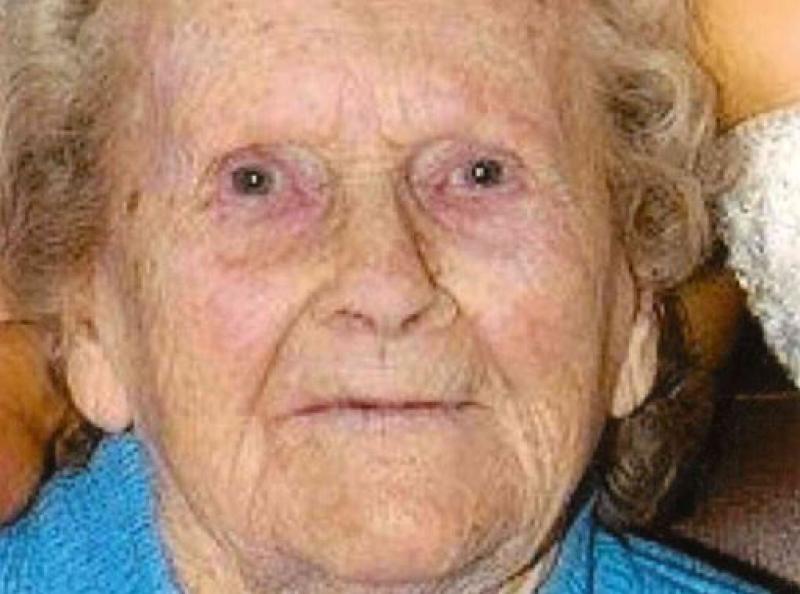 Gillie Callan, 103 Pearse Park, Dundalk, who has died, was one of the town’s oldest residents.
Aged 94, she passed away peacefully on January 5, 2019, surrounded by her family in Our Lady of Lourdes Hospital, Drogheda.

Gillie had only recently taken ill and went into hospital on New Year’s Eve.

She was born in Camp Street, Dundalk, the youngest of eight children of Richard and Roseanne Stewart, and was the last surviving of her two sisters and five brothers.

After attending Castletown girls School, Gillie looked after children for a time.

She met and married at a young age Jimmy Callan. He passed away six years ago, at which time they had been married for 70 years.

Indeed, they were great parents who lived for their family.

A very religious lady, she had a great devotion to Saint Brigid and Our Lady, and often visited Saint Brigid’s shrine in Faughart.

Gillie was predeceased by her parents, husband, Jimmy, daughters, Rose and Elsie, sons, Thomas, who died in infancy, and Paul, along with grandsons, Thomas, Richard and Stephen, son-in-law, Kevin, sisters, Sue and Rosie and brothers, Willie, Tommy, Johnny, Dick and Harry.

After reposing at home, her remains were removed to Saint Patrick’s Cathedral where the funeral Mass was celebrated by Father Mark O’Hagan and Father Seán McArdle, a family friend.

There was a great turnout, including many of Gillie’s old neighbours from Pearse Park where she lived for 68 years.
Some of her grandchildren and great-grandchildren carried the coffin out of the house, while Gillie’s six grand-daughters took the coffin up to in front of the altar.

Grandchildren and great-grandchildren did the readings and prayers of the faithful. They also brought up symbols of Gillie’s life including a Saint Brigid’s Cross, prayer book and a picture.

Daughters-in-law, Patricia and Marian participated in the offertory procession.