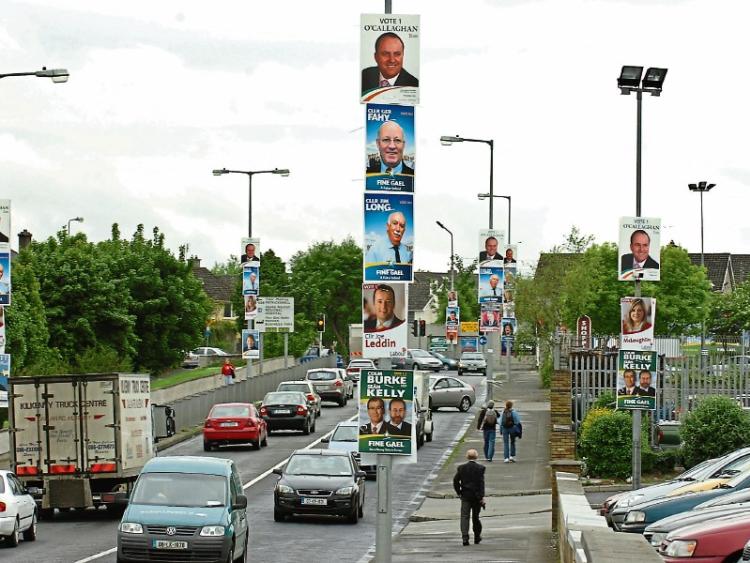 The merits of an initiative in Limerick where councillors signed up to a voluntary ban on posters for the next local elections, was put to Louth County Councillors in the Dundalk and Ardee Municipal Districts, to find out if they believe it would work in Louth.

Dundalk Cllr Maria Doyle referred to an initiative already taken up in Louth, where Louth Tidy Towns Together had asked the candidates in the recent presidential election not to erect posters in 50kmph zones in Blackrock or Carlingford.

“My understanding is that this initiative was successful”, said Cllr Doyle.

“As a supporter of Tidy Towns and the work they do throughout our county, I would be happy to see a similar initiative introduced for all elections, including the local elections in May.”

“I would love if all councillors (and parties) did this in Louth.” Cllr Yore referred to the costs on both the taxpayer and the candidate, the environment and the “overload of 'mug shots' being good reasons”, for supporting such an initiative.

She also mirrored Cllr Doyle's comments on the past Tidy Towns initiative.

Cllr Mark Dearey offered a different perspective to the idea, saying: “I think posters are an important part of elections. Their erection should be better managed, but nonetheless I think they do aid public engagement and probably turn out too.

“Note the poor turnout in the recent presidential election where only SF did serious postering.”

Cllr John McGahon's response was agreed with this to some extent.

“Removing posters I actually think provides a really big advantage for incumbent councillors. So by me actually agreeing to a poster ban, that would actually suit me down to the ground.

“I remember in 2014 when I was up against, as a first time candidate at 23 years of age, up against sitting councillors, people who were much better known. Actually getting posters out there and getting my face out there was of real importance to me.”

Referring to the earlier Tidy Towns initiatives Cllr McGahon added: “In terms of a poster ban, if other Tidy Towns in Louth requested that, I'd have no problem.”

“I feel that posters play an important part in the electoral process certainly at local election level. In recent times there has been an effort to introduce selective or blanket bans in certain areas of the state.

"Regarding the wider issue of election posters they are allowed for under electoral law. I feel if tidy towns groups, media etc wish to stop the practice then they should focus their efforts on TDs and general election candidates who will have the ability to influence primary legislation. Councillors, and local election candidates, have enough restrictions as it is."

Chairperson of Louth Tidy Towns Together, Larry Magnier also spoke to the Democrat on the idea. He talked about the past initiative referred to by the councillors, saying:

“It was very successful. There were no election posters for the presidential election erected in any of those locations within the 50km speed limit, which is what we sought at the time.

“We were very happy with how it went and we are already talking about asking for a single voluntary code of practise for this upcoming election.”

“It's a different kettle of fish entirely because of the fact that it's local, where the other ones were national campaigns.

“However, we are certainly fully behind any attempt that there is to eliminate posters wherever in the county.

"Explaining the rationale for the past initiative", Larry said, “there were two reasons which we had ourselves in Louth Tidy Towns in doing it. The first is the 'blight on our landscape'.

"The fact that they interfered significantly with an awful lot of the work Tidy Towns groups would be doing during the year to try to enhance and maintain their towns and villages to a very high level of presentation.

"For a period of time that would be completely undermined by the erection of posters everywhere that was possible to erect them .

"The second reason was the elimination of single use plastics and election posters are made of plastic and they are single use, by and large. They are difficult to recycle and of course the cable ties are another element of this."

Local elections in Louth take place this year on Friday May 24, the same day as the EU parliament election.