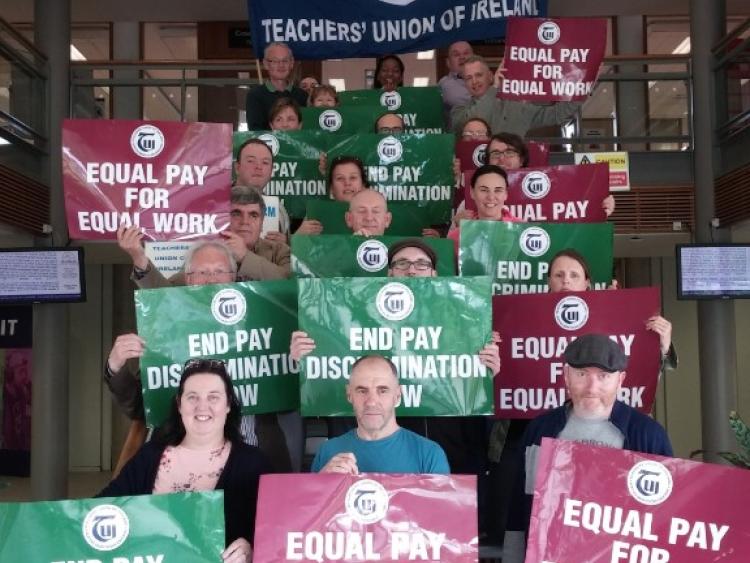 Members of the Dundalk IT branch of the Teachers Union of Ireland (TUI) joined with their colleagues throughout the country to stage a lunchtime demonstration on Thursday 24th May, demanding an end to what it sees as pay inequality in the education sector.

The pay cut that was introduced by the Government as an austerity measure in 2011, has seen lecturers and researchers recruited since 2011 subjected to a unilateral 10% reduction in pay.

The TUI say the pay cut was imposed in addition to previous austerity measures that has seen salaries, funding and staff recruitment in the education sector considerably reduced, while workloads have been correspondingly intensified, with Irish Institute of Technology lecturers and researchers now working 37% more hours than many of their European counterparts.

Unions have opposed the two tier pay system since its introduction and demands for post 2011 recruits to be resorted to agreed pay levels intensified at this years Teachers Union conferences when ASTI, TUI and INTO threatened to engaged in industrial action in the issue was not addressed by the Government.

Branding the punitive two-tier pay scale as “Never negotiated, never agreed and profoundly unfair” during Thursday's demonstration, DkIT's branch chair Kenneth Sloane highlighted the hypocrisy of  the Government's determination to maintain austerity measures such as pay inequality, which claiming credit for an economic recovery, stating that the government were “ instead using the economic crash as an opportunity to permanently downgrade the teaching profession and every other public service profession”.

He added that “If this pay inequality isn’t addressed, there is going to be industrial action. We are going to take serious coordinated action until this is resolved. The resolution is the restoration of all staff to the agreed pay scale."