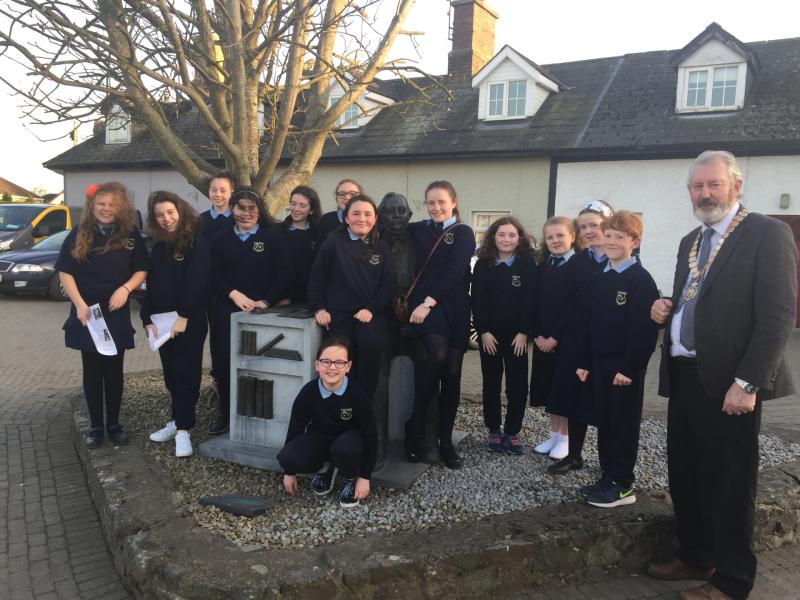 Pupils of Tallanstown NS with INTO President Joe Killeen

Despite its small dimensions, Louth boasts a rich heritage and many prominent figures are associated with the county. Not least amongst the influential characters associated with Louth is a remarkable 19th century philanthropist and champion of non-sectarian education who changed the lives of generations of young Irish people. 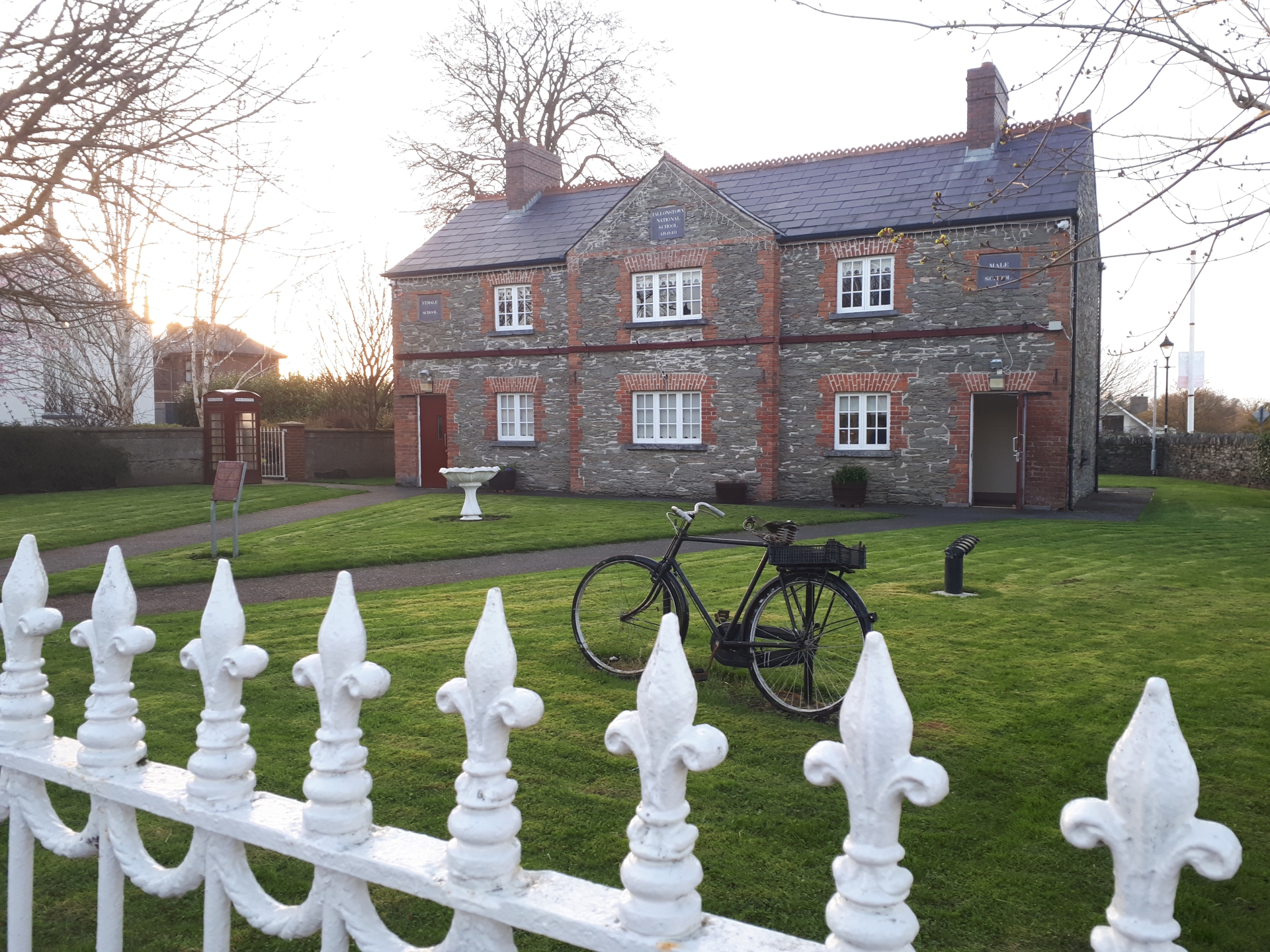 Vere Foster, the founding President of the Irish National Teachers’ Organisation and a supporter of 1,400 primary schools in Ireland, was an extraordinary person with great conviction who recognised the importance of education and exhibited a passion and unfaltering commitment to improving the quality of teaching.

Tallanstown, in mid County Louth a rural parish steeped in tradition, is proud of its connection with Vere Foster. On an island in the centre of this picturesque village, under the shade of a tree, is an impressive statue immortalising this truly outstanding figure. Here across from the school which was built by him, Vere Foster has a great vantage point and it is as though he sits and makes his presence felt observing the comings and goings of daily life and welcoming those entering the village. 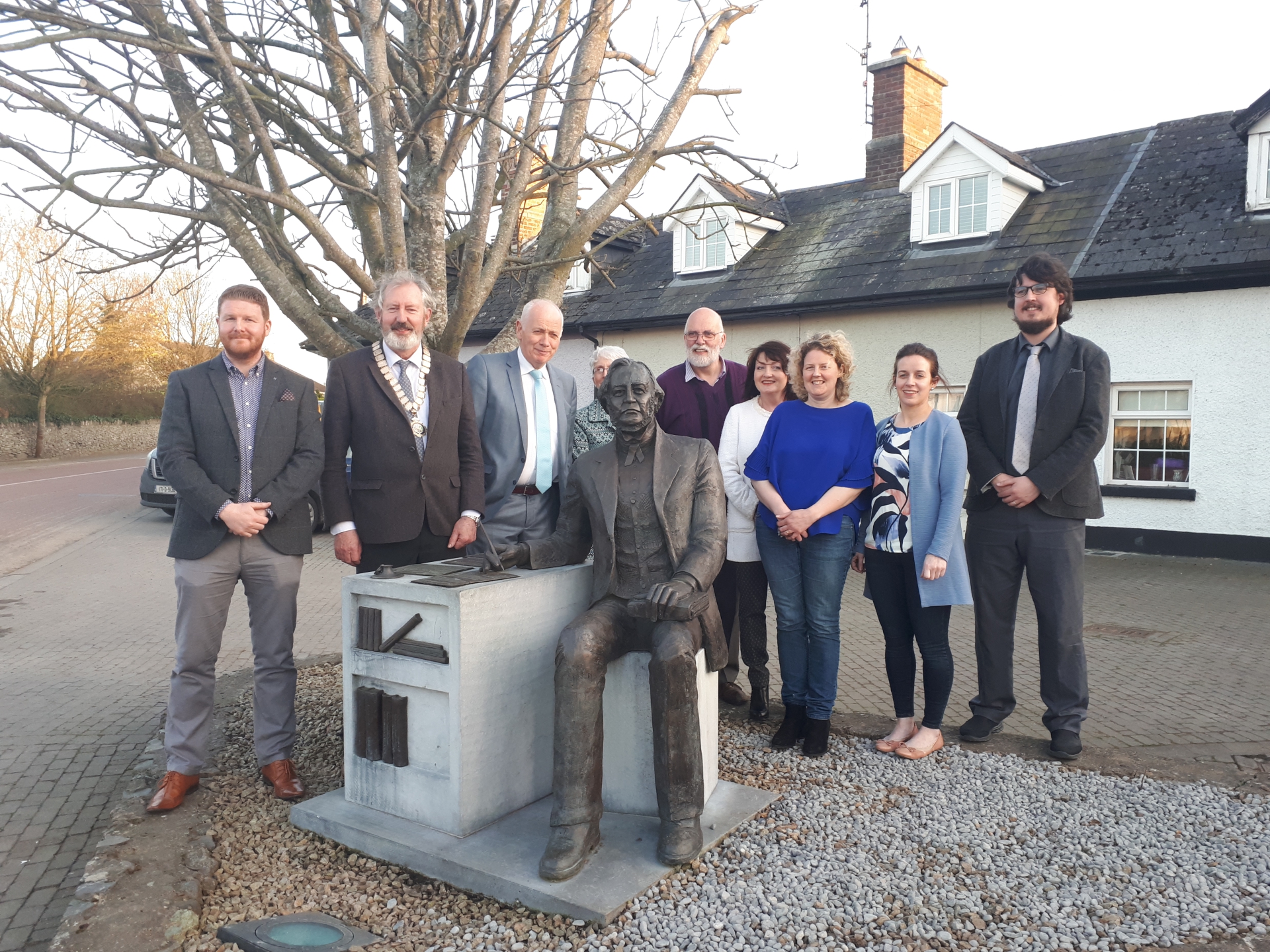 This year marks a significant important one for the Irish National Teachers’ Organisation as the union celebrates 150 years since its establishment. Throughout the country various branches and districts are organising an eclectic programme of events, promoting an awareness of the unique contribution the union makes to Irish education.

It is fitting that such celebrations would include recognition of our first President and owing to his strong link with Tallanstown and mid-Louth, the Ardee Branch of INTO were eager to facilitate an event that honoured Vere Foster. On a glorious sunny evening the splendid scene in Tallanstown provided the perfect backdrop for a special celebration to commemorate Vere Foster and celebrate his legacy.

Our special commemorative event was held on the 18th of April and the evening began in the local church where parish priest Fr Paul Clayton Lea celebrated mass to honour past and present members. A former Diocesan advisor, Fr Clayton Lea’s insight into the education shone through in a thought-provoking homily.

He referred to the fact that, in a break from the norm, the primary school in Tallanstown is not named in honour of a saint, but rather the title bestowed upon the school is “Vere Foster Memorial School”. In his own way Vere Foster epitomised a saintly character, serving the poor and striving to create the opportunity for a bright future for younger generations. The powerful words of INTO’s first president

“A nation’s greatness depends on the education of its people” remain as the union’s motto.
Fr. Paul alluded to the influence that a teacher has on their pupils and had a special mention to his first teacher Mr. Pádraig Lynch who was in attendance on the night. He also called to mind with fondness those INTO members who are no longer with us. During the mass the children of Vere Foster Memorial School choir provided beautiful music which greatly enhanced the liturgy and the readings were eloquently delivered by senior pupils of the school. 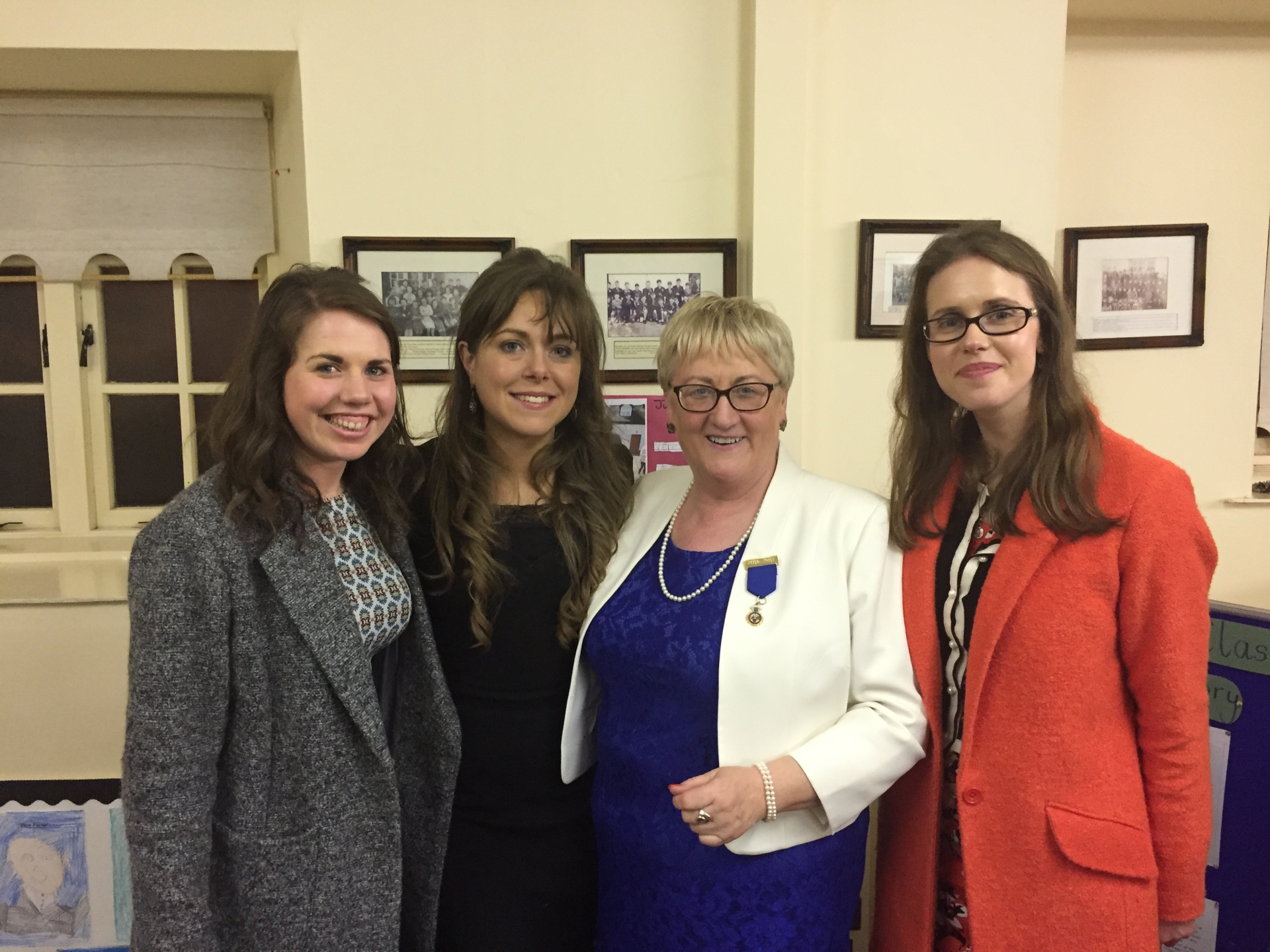 After mass guests assembled in the nearby “old school”, a meticulously maintained stone building bordered by rich cast-iron railings. This original building, which dates back to 1840, was the ideal venue for this event- the beauty and authenticity adding splendour and evoking a deep sense of nostalgia.

A gallery of black and white photos adorn the walls, a glimpse of the school days of yesteryear. A number of those present recalled teaching in this building, including Mr. Colm Minnock, a current teacher in Tallanstown and an active member of the Ardee Branch who spoke fondly of his memories of days in the old school.

A “Céad Míle Fáilte” was extended by Aoife Mullen, Ardee Branch Secretary. The recently elected INTO President Joe Killeen was present on the evening. A Principal in Gort, Co. Galway, this was Mr Killeen’s first visit to Tallanstown and he expressed his delight in coming to the area, especially at a time of great celebration for INTO. He drew some parallels between his locality in the West of Ireland and the rurality of Tallanstown and spoke fondly of his childhood memories of school and how they have shaped the educator that he is today.

Guests were then treated to a presentation by well-known local historian Micéal McKeown who delivered a comprehensive account of the life of Vere Foster, delving into his ancestry and charting the journey from his birthplace in Denmark to the mid-Louth region.

The lecture was informative and engaging, unearthing interesting nuggets of information. Born in Copenhagen of an Irish-born father Vere worked in the UK Diplomatic Corps. He moved to Ireland spending a great deal of time on his brother’s estate outside Tallanstown and developed a great affinity with the area.

The sorrowful spectacle of men, women and children dying in their thousands which he witnessed during the Great Famine caused much distress to him and fuelled his determination to remain in Ireland and try to alleviate the plight of its people.

He made three passages to America on emigrant ships to obtain first-hand knowledge of the conditions endured by Irish passenger and his personal evidence presented to parliamentary committees, was a catalyst in reforming legislations which led to notorious American bound ships being replaced by more humanely conducted vessels.

Vere Foster’s next reforming work was in the field of education. With an admirable selflessness, he used his privileged background and wealth to benefit others, building hundreds of schools across the island. Recognising the negative way in which teachers were treated and the crippling restrictions placed upon them, he identified how this could prove detrimental and cultivate resentment among people in the profession.

Vere Foster helped to set up a teachers’ union which in time became the Irish National Teachers’ Organisation (INTO). In the current climate where the restoration of pay equality is a dominant issue for INTO, it is fitting that major problem echoes Vere Foster’s concern for the teaching profession.

Great recognition must be given to Mr. Brendan Murphy, Principal, and the entire teaching staff of Vere Foster National School for their major contribution to the celebratory event. The time and effort invested into the preparation of the displays was evident. Their impressive projects demonstrated integration of various curricular areas including samples of precise penmanship - a nod to the influence of Vere Foster on handwriting.

The devising of a series of copy books giving instructions in handwriting, drawing and water colouring was one hugely significant educational achievement for Vere Foster, as he believed that a high standard of penmanship was an important educational attribute for children. Perhaps we have among them future INTO members who will continue to carry the flame kindled by Vere Foster!

Over refreshments, the crowd interacted whilst enjoying some traditional Irish music provided by local musicians Fionnuala and Michael Kirby.

On such a momentous occasion, it was a privilege to have several much-esteemed guests in attendance, including the current president Joe Killeen, ex-President John Boyle and two past presidents of District 5 Mr Gerry Malone and Ms Rosena Jordan. Deputy General Secretary Noel Ward also travelled to the event as did the Chair of the Northern Committee Dorothy McGinley.