'Super' Simon aims to reinvent the wheel for tomorrow's bikers

“Anyone who is starting their own business, I would recommend coming to Dundalk." 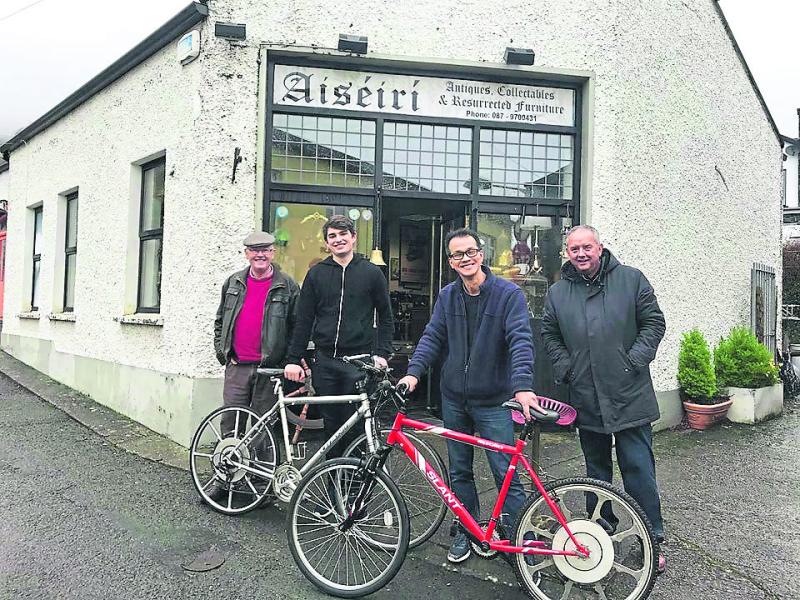 Simon Chan the founder of the Super Wheel (second from right), along with Oisín (second from left) and two Carlingford locals during a recent test cycle through the Louth village.

Dundalk-based entrepreneur Simon Chan, says he would like to see his ingenious invention, the Super Wheel, become a standard component for all bicycles in the future.

“The technology used in most bicycles today is over 200 years old. I think the Super Wheel is the future. It should be a standard component for all bikes,” says Simon.

The unique wheel, which will be launched on Kickstarter this summer, can be fitted on to any type of bicycle. It utilizes weight to energy conversion technology to propel a bicycle forward with minimal effort, even on sharp inclines.

Creator Simon explains: “Super Wheel was developed as the alternative to e-power assistance to aid cycling efficiency. It is completely powered by the user.

The weight of the user is converted into power assistance. The Super Wheel has no battery,” Simon said.

Another advantage of the Super Wheel is that it weighs just under 10 pounds – which means it can be easily transported by people such as commuters.

The start-up is currently based out of DkIT's Regional Development Centre (RDC). Simon, who currently lives in Cavan, agrees that the RDC is an excellent place for a fledgling company to be based right now.

“The Regional Development Centre is an incubation centre which has all the facilities you could need. It's a very good place for startups.”

“Anyone who is starting their own business, I would recommend coming to Dundalk.”

Simon, who is originally from Hong Kong, has been living in Ireland for the last 20 years. He first began thinking about how he could reimagine bicycle designs as a child.

“My father ran a logistics company in Hong Kong. I was inspired by the power steering used on vehicles in the factory, and I have been on a quest ever since to see if I could transfer that idea to a bicycle,” said Simon.

Cycling has been a lifelong passion of Simon's. He began working on his idea for the Super Wheel back in 2005. His dream finally came to fruition in 2011 when he began working with an engineering team in University of Ulster.

In February 2015, the business received funding from Enterprise Ireland, which is the year they also began working with the DCU Mechanical Engineering team to test the product.

After multiple prototype and development stages, the first Super Wheels are expected to go on sale via Kickstarter this summer.

They will be manufactured in Co Down and Simon estimates that the product will retail at “more than 60% cheaper” than electric bikes.

During his marketing and testing adventures, where Simon took the Super Wheel out for a test run in places across Dundalk, Carlingford and South Down, the distinctive wheel garnered much attention.