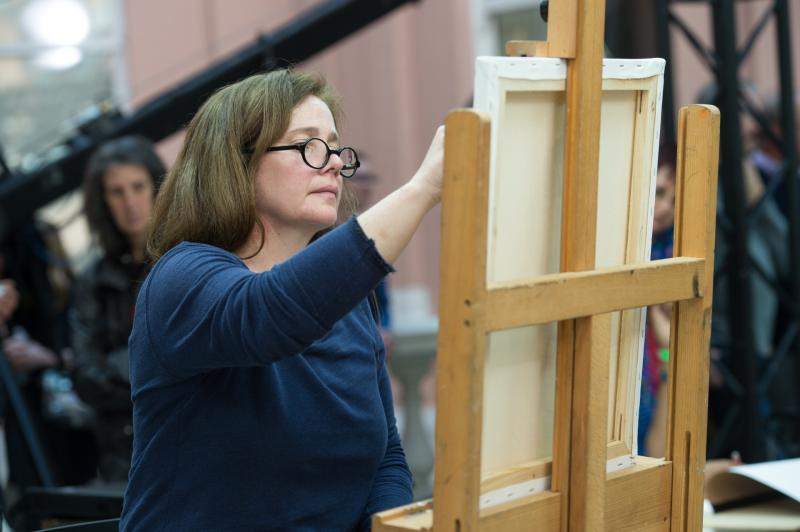 Dundalk lady Leanne Mullen became the second Irish artist to go through to the semi-final of Sky Arts’ Portrait Artist of the Year after seeing off eight other artists in Heat 2 of the competition last night.

Leanne, who now lives in Carlingford, impressed the judges with her portrait of catwalk queen Daphne Selfe and will now go forward to the semi-final of the competition which will air on Sky Arts on Tuesday 13th March.

She joins seventeen-year-old Hetty Lawlor from Mayo who last week became the youngest artist ever to progress to that stage of the competition.

Leanne trained as a sculptor, and studied Ceramics and Sculpture at the National School of Art and Design in Dublin before mastering in Sculpture and Printmaking at Ulster University. She started painting five years ago because the cost of producing sculptures is pricey and as a single mum she needed to prioritise the mortgage.

She’s always been a fan of the Portrait series and her son finally convinced her to enter this year. A purpose-built studio in her garden means artwork (of varying mediums) is created daily, and the four-hour limit is no obstacle for Leanne as she works quickly and spontaneously, hoping to achieve a level of energy in her work. Drawing will always be her first love, but developing her painting style has her full focus at the moment.
She describes an inner dialogue going on within herself constantly when she paints, one voice is saying ‘You’re crap, its crap give up’ the other voice saying ‘you’re ok, its ok, you’re great’

Commenting on Leanne’s painting, Independent Curator and judge, Kathleen Soriano said: “Leanne really shone through. She’s got this experience and quality to her work. She understands painting and sculpture.”