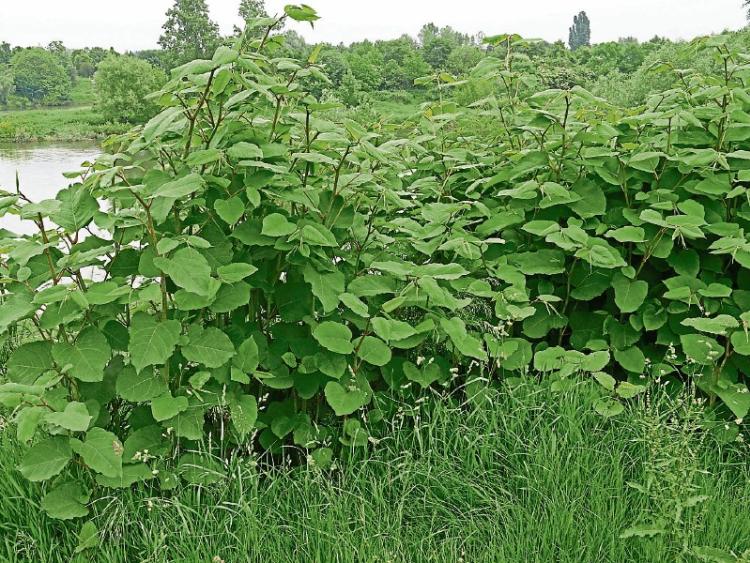 Without wishing to panic or even annoy anybody, I would like to draw the attention of readers to something I spotted near the centre of the town just last week! It was a small notice at the verge of what is officially called Bóthar Iarnród (Railway Road) but what most locals know as 'The Marshes Road'! This notice had photographs of plants on it and the wording was in Irish. Now I have some knowledge of Gaelic but, as far as I was concerned, it might as well have been in Greek (or should I write Japanese)?

When I moved a few paces further on I spotted a similar notice, only this time the wording was in English and I realised that the pictures were of the same plant in various stages of its growth. The notice informed me that, if I spotted it, I should not attempt to cut or remove it but to immediately inform the Louth County Council. The two notices referred to a growth called Japanese Knotweed but it was only after I moved on that I realised that the two notices had been placed where that very plant appeared to be growing!

Now I had heard about Japanese Knotweed, or 'Fallopia Japonica' to give it its botanical name, and knew it to be a very invasive plant which can do a lot of damage in urban environments but had no idea that it was growing in Dundalk! The experience brought back memories of reading John Wyndham's famous story 'The Day of the Triffids', later made into a scary movie, when I was at school. I recalled that, at the time, I had nightmares of plants trying to get in my bedroom window to suffocate me. This in turn made me wonder if Dundalk is experiencing an invasion of 'alien' plants trying to take over the town?

At first I did not take the matter all that seriously but when I read a little about the weed I began to realise that it was 'no laughing matter' and the appearance of this weed could cause a lot of trouble, and expense, to Dundalk of the future!

I was even more concerned when I spoke to a number of friends who know a little more than I do about gardening. One man told me that he had read up about the weed after neighbours had warned him that it was growing in public places Blackrock.

He said that the roots can travel deep underground for considerable distances and the shoots come up through the floorboards of houses. He said that the situation in some parts of England was so bad that banks were refusing to give mortgages to people who wished to purchase buildings where this weed had been spotted.

This story was confirmed when I read on the internet that there are places in Ireland when planning permissions to build have been refused because of the presence of this weed.

Speaking to Tom Kilkenny, the retired former agricultural inspector who lives at Kilcurry, he also confirmed that Knotweed, and indeed some other types of plants that were not native to this country, can be a very serious threat to the environment!

It can break through brick walls and damage footpaths and even road surfaces. He added that there was a growth of this weed in the Toberona area that was causing some concern.

The point of the discovery of this weed in the Marshes is that it is very near to houses and, perhaps more seriously, it is very close to the new secondary school which is being built just across the road.

Another serious concern in this area must surely be that Knotweed spreads rapidly along watercourses and the Rampart River which is vital to the drainage of the centre of town is not all that far away.

I read somewhere recently that someone tweeted that the the weeds growing unchecked in Rampart steam were not of serious concern.

The water in this watercourse is low at present but when the heavy rains come, as they surely will, there is bound to be flooding because it them. I have even seen evidence of fly-tipping into this watercourse which has not been removed. If Japanese Knotweed or any other fast growing shrub makes its appearance there, there will surely be trouble ahead for the local authorities!