The famous history of Brewing in Dundalk 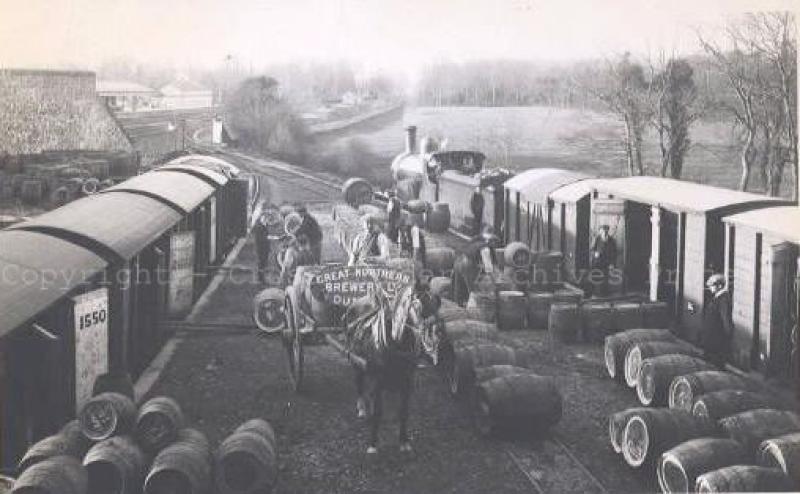 The long tradition of brewing in Dundalk is under threat from that modern buzzword, rationalization. At one time over three centuries past there were an estimated 35 brewing establishments in the vicinity of north Louth.

Most of these were small cottage industries with the produce sold on the premises. Competition culled the numbers in the trade and by the late 18th century just 14 breweries were still in operation.

Around this time William Gawley was selling cut price beer at 23 shillings a barrel. Another contemporary James McAllister established a brewery at the former cambric factory (cambric is a lightweight, closely woven white linen or cotton fabric) at Casengrove on the Ardee Road. The new establishment became known as Cambricville

The larger operations were reliant on the new steam powered method of brewing while the their smaller competitors relied on the traditional horse powered method. Provincial brewers tended to offer greater variety in their produce, with their Dublin counterparts mostly producing porter. Guinness ceased ale production in 1799.

By 1837 the number of breweries was down to eight and the industry was about to suffer two hammer blows. First, the Famine of the 1840s had a devastating effect on the industry and then the Temperance Campaign spearheaded by Fr. Theobald Mathew hastening its decline.

Just two Dundalk Breweries survived in 1846; McAllisters of Cambricville and Wynnes of Dublin Street and neither could be said to be rolling in it. Four years later a new partnership emerged to give rise to one of the name synonymous with brewing in Dundalk, Macardle Moore.

In 1850, brothers John Charles and Arthur Duffy, both nephews of the owner of Wynnes, in tandem with E. H. Macardle took over the running of the Dublin Street operation. It started as a modest operation but within a decade Macardle was the sole owner.

Arthur Duffy disposed of his interest in the brewery in 1859 and when his brother died in France shortly afterwards, John Charles Duffy s widow sold his share leaving Macardle in sole control.

He was a highly regarded and influential local figure, chairman of the Town Commissioners and Chief Magistrate of the Borough. Macardle was also a member of the Harbour Board and a director of the Dundalk and Newry Steampacket Company.

A popular figure he was known to be good-natured and looked after the poor of the town. Macardle died at his Cambricville home on February 26, 1877 and most of the shops in Dundalk closed to mark his passing while the bunting of ships on the quays flew at half mast.

Macardle formed a partnership with Dubliner Andrew Thomas Moore in 1863 and assumed the running of the idle Cambricville premises that used to belong to MacAllisters with the result that a new regime took off.

Moore had a good business pedigree and had connections with Dundalk through his wife’s family. He was owner of one of the largest tannery s in the country as well as being managing director of a Dublin distillery, George Roe and Co.

The new company soon acquired an enviable reputation and in 1882 won a gold medal at the Dublin Exhibition for its ale. The first of many prizes earned by the company.

It was also noted for being at the cutting edge of production techniques. Mr. John St. P Macardle patented the Anti-Bacterial Cask Cleansing Apparatus. It worked by pumping hot air followed by hot water into the barrels and then followed this with a blast of cool air.

He also designed the Macardle Air Pump System, a process for supplying air to refrigeration and fermenting departments in order to eliminate bacteria.

His inventions didn’t stop there and he overcame the problems associated with transporting malt, which tended to absorb moisture rapidly, by developing the Malt Wagon.

Transport to and from the Cambricville Brewery was boosted considerably by the Great Northern Railway’s decision to run a siding from the mainline to the production base.

By the end of the century their famous ale was being exported far and wide and was so popular with the British military that the head of the company was knighted.

In 1896 a new consortium emerged and with a capital base of 30,000 built a new brewery in the town. Their purpose built premises were located close to the Great Northern Line. Its first head brewer, a Mr. Borham, was renowned for his famed amber ale.

It produced three kinds of ale; a light dessert ale, an amber ale and a strong ale. The latter was so potent that a glass or two could, according to the Democrat archives, knock a man down, while half a dozen or so would fell an ox."

The new enterprise had the latest steam powered boiler and apart from local barley relied on hops from California and Kent.

A fire in attic at the Macardle Moore Brewery on April 26, 1913 was quickly extinguished, but a number of valuable documents outlining the history of the company were lost.

In 1955, Smithwicks acquired the Great Northern Brewery and four years later it passed on to the Guinness empire. A move which heralded the advent of another name that has become part of the local folklore, Harp Lager.

Sales of the blond beer became to take off in the 1950s and the quality of the water supply from Ravensdale was considered to be on a par with that used to brew the world famous Pilsener lagers in what was then Czechoslovakia.

The new product with its Brian Boru harp emblem first appeared in June 1960 in bottle form. By 1966 it was also available in draught form. Its success was down to the appointment of Dr. Herman Muendar, a distinguished German "Braumeister" who had made his name in reviving the war damaged breweries of the Ruhr district.

Meanwhile the Macardle Moore company forged links with Ind Coope, brewers of the famous Double-Diamond which proved to be very popular in the late 1960s and early 1970s and was brewed in Dundalk until 1985.

Macardles joined the Guinness stable in the late 1960s bringing the rival local breweries under the one umbrella. In the wake of massive job losses at the turn of the Millennium who knows what the future holds for brewing in Dundalk.

The difference in labour costs between it and Belfast were cited as reasons behind 290 redundancies announced in the year 2000. Whatever happens in the future, Dundalk’s place in the annals of brewing should not be forgotten.