12 Dundalk heroes set to be honoured with outdoor banner display 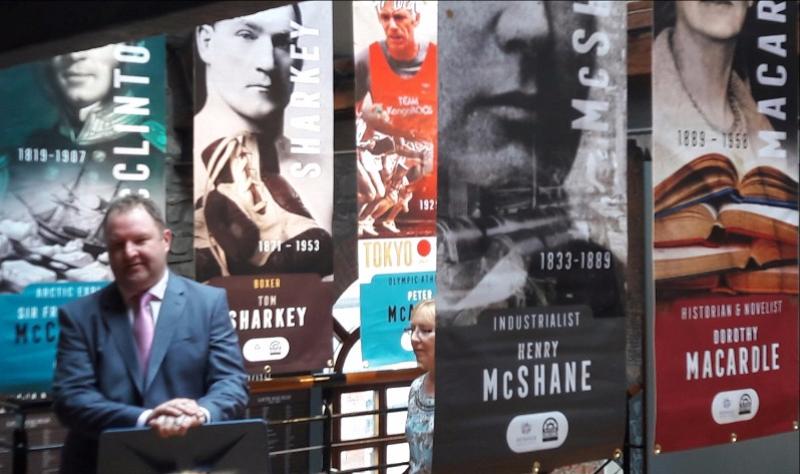 The international achievements of 12 Dundalk people are to be recognised in their hometown with an outdoor banner project entitled Our Local Heroes.

The banners will be hung in the coming days on lampposts along Park Street.

The first phases of the 'Our Local Heroes' project launched at a special event in the County Museum today (Wednesday) which was attended by some family members.

Led by Dundalk Tidy Towns, and produced in association with The County Museum, the first 12 local heroes to be unveiled are.

Newly-elected chair of Dundalk Tidy Towns, Helen Byrne, said the project has been amazing learning experiences for her, with potential for further expansion.

"I'm not originally from Dundalk so when I look at the 12 people who are on this list I'm just blown away by it.

"We have an engineer who worked on the Syndey Opera House - one of the most identifiable and unique buildings in the world. We have athletes of world-class standard, we have a number who made amazing contributions to the world of arts, culture, industry and exploration. They are all worthy to be in this first phase of Our Local Heroes.

"I have to recognise the work put into this by the county museum. Indeed it was Anita McEneaney who brought the project forward and I'm so happy she did as it shows how many more legends could be added to the project in future phases.

"This project provided us with a fantastic opportunity to effectively bring an exhibition on the streets of Dundalk.

"Our main problem was how to keep it to 12 people in the first phase. We did make a decision to veer away from politics but we did hit a wall on finding more women to feature.

"Of course we know there were more women out there who should be recognised as local heroes but maybe due to the times there were years ago, they couldn't or didn't want to be noticed.

"We would love to hear from anybody who can help us highlight our female heroes.

"There is so much potential for this project. Count how many lampposts we have in Dundalk and that's how big this project can get!"